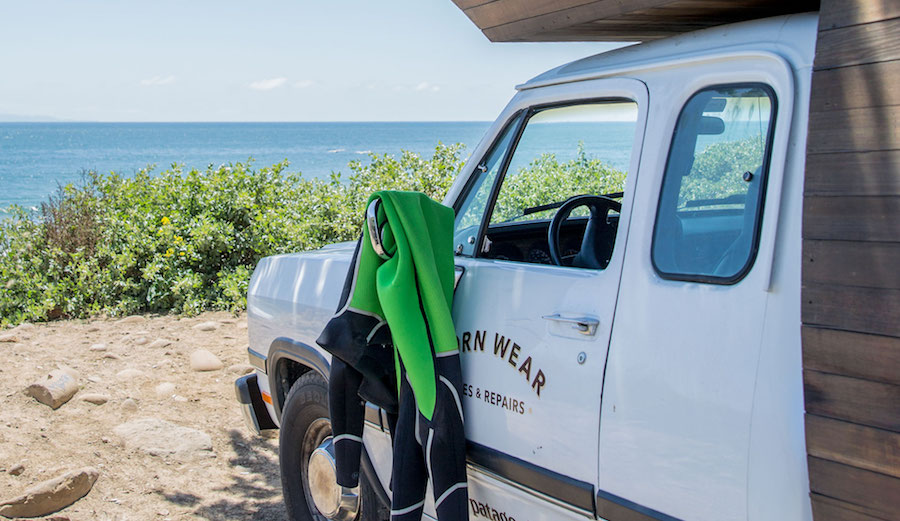 Whatever the brand, Patagonia wants to fix your busted wetsuit. For free. Photo: Patagonia

Over a year ago, I pulled over on the side of the road where PCH makes a sweeping turn at Los Angeles’ most famous (and crowded) pointbreak. I switched the car off, stretched and took a whiff of the air – equal parts car exhaust and ocean spray. “Ah, Malibu,” I thought.

A chilly cloudy morning warranted jumping into a 4/3 – the only full suit I had at the time, anyway – to paddle out to enjoy a fresh pulse of south swell. The point was reeling. An hour in, I’d gotten burned on every wave I went on. Then, a perfect head-high one lined up in the distance, I turned and flew down the line on the twin fish I was riding. No intrusions and a few drawn-out open-face turns left me with a perma-grin as I paddled back out. “Ah, Malibu,” I thought.

Scratching my way back to the lineup a longboarder to my right clad in a spring suit and booties panicked as someone came too close for comfort in front of us. I can’t begin to understand what he did, but when I came up from duck diving his board was on top of me, fins in my shoulder, my wetsuit torn. “Ah, Malibu,” I thought.

That wetsuit, still fairly new, now sits in my garage, unused ever since. Sure, I could try to repair it myself but given my success to date with DIY I’m convinced it’ll turn out utter shit. I imagine surfers the world over have a wetsuit or two in their garage they can’t bear to part with because it’d be wasteful, but in the meantime have no idea what to do with it other than let the thing languish in disrepair.

A new initiative from Patagonia might be the answer. For virtually the life of the company, Patagonia’s been repairing busted seams, zippers, and slices in their gear either for free or for a modest fee. Born in 2013, Worn Wear is an initiative that includes both a touring band of repair aficionados ready to get your gear back in fighting shape and recently an online store where people can buy used gear on the cheap. For the first time, the Worn Wear van will be repairing wetsuits in its upcoming tour, and not just Patagonia brand wetsuits, but any brand. For free. Yes, FREE. The only catch is you’ve got to show up with your busted suit to one of the locations below (which may or may not be convenient) on the date indicated and it has to be dry.

You better believe I’ll be taking my 4/3 to get patched up. Look out for an update on the process around then.

Why wetsuits? Patagonia’s Corey Simpson explains that in large part the move is an effort to educate surfers on the environmental costs of wetsuits. “Our Worn Wear crew is expanding into the surf space because we feel the sport and industry needs a heavy dose of education around the impact of the equipment they are buying, using and damaging,” he said. “The knowledge of the environmental cost to make wetsuits is something that is unknown to the majority of surfers. Much of our effort around our Yulex wetsuits have been in hopes to have the surf community and industry gain an introspective look on what goes into a suit (literally) and what it means to be “invested” in the gear you buy. Ultimately the Worn Wear tour will get folks involved in keeping their suits and boardies in use as long as possible, reducing the impact of ditching the suit in the landfill and buying a new one.”