Editor’s Note: The Inertia’s new film Peak California is supported by our partners at Sierra Nevada.

Your comfort zone. Depending on who you are, it’s either bliss or torture. As surfers, we walk a thin line between stubbornly developing an intimate relationship with a local wave and its community and exploring the unknown. The hug of a homebreak surf check can become a stifling ritual. Especially when it interferes with our desire to try new things. Typically, when we’re experiencing something for the first time, we’re wide awake. We’re vulnerable. We’re quickly learning, and we depend on the generosity and patience of strangers to help us on our path. It’s a beautiful space to operate in. Such is the electric spirit we embraced with our new film, Peak California, starring big-wave surfer Jojo Roper and climber Nina Williams.

For those unfamiliar, Nina Williams climbs 50-foot walls of sheer rock. Without a rope. For fun. Climbers call it bouldering. She’s the first woman to ascend six different highball boulders on planet earth. Highballs are boulder problems that are long, demanding, and higher off the ground than most of us would be comfortable with. She’s a very sweet person. Also, she’s afraid of water. So she’s going to learn to surf. We’ve got just the teacher.

Jojo Roper has made a name for himself charging the heaviest waves on earth. He comes from San Diego surfing royalty, and he says he wants to ride the biggest wave…ever. He likes colorful surfboards, like his dad, San Diego icon Joe Roper. And Jojo’s weirdly afraid of heights. So he’s going to learn to climb. We’ve got just the teacher. 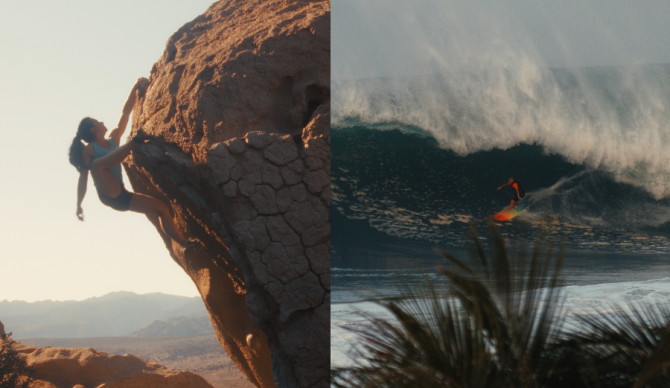