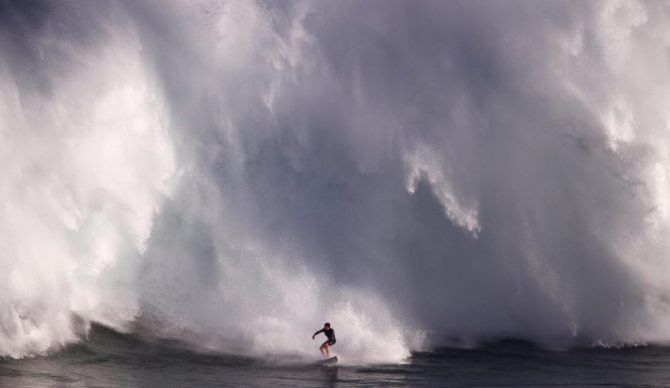 Editor’s Note: Our new series, All-Time, showcases images that stop us in our tracks, from sessions we’d all like to have experienced. Only on rare occasions do nature’s infinite variables align. It’s even more unusual that photos capture the essence of that moment. If you’re sitting on an image (or two) from surf or snow that you think fits the description above and you’d like to be featured, shoot your photo with a few sentences about the day to info@theinertia.com

For years now, any time a swell lights up Jaws we hear from Maui-based photographer Aaron Lynton. First swell of the season, biggest day of the year, he’s on it. His emails always come with a palpable sense of excitement and appreciation, and sometimes with an accompanying story of camping out overnight to secure a prime viewing spot atop the cliff.  It’s an admirable level of dedication to one spot that we typically only associate with a handful of surfers who’ve become synonymous with their favorite wave.

So it’s only fitting that Pe’ahi was the very place that provided a rite of passage for Lynton in his growing career: his first magazine cover shot. Nathan Florence outrunning — or at least hoping to — a hellacious mountain of white that looks more like a bonafide backcountry avalanche than a wall of water.

Perched up on the cliff, where he’d spent the night camping out, Lynton watched Florence scrape into the wave before he was forced to go straight. And that’s typically when we stop paying attention in surfing, isn’t it?

“I was able to capture just a moment before he got annihilated, and sent cartwheeling underwater,” Lynton told The Inertia. When the dust seemingly settled Lynton reviewed the sequence with his shooting partner Marcus Rodrigues.

“Marcus sees my image for the first time,” he recalls. “He was almost awe-struck and immediately he claimed it was a mag cover. I knew it was a special image but did not know if it was a cover shot. I had just recently gotten some images published in Freesurf magazine of Ian Walsh’s insane ‘Ride of the Year’ barrel, so it did seem possible, just far-fetched.”

Sure enough, a black and white version of the image did land on the next cover of Freesurf, Hawaii’s popular homegrown publication. With the cover, Lynton had scored the monumental notch in the belt for any photographer: a cover photo.

“It is still a powerful moment to look back upon on the cliff because it actually came to fruition,” he said. “By some combination of luck and skill, it actually landed me on the cover of Freesurf magazine — my first cover shot — and allowed me to be the most nominated photographer in the 2018 WSL Big Wave Awards.” 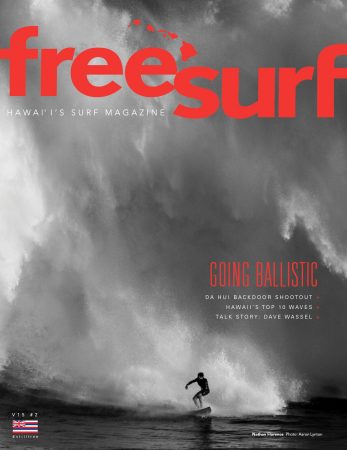