All-Time: Passing Up XXL Mavs Only to Find ‘What Every Surfer Is Searching For’ 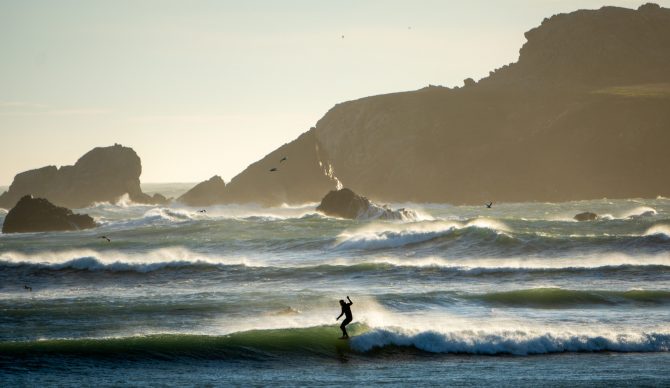 There are a handful of waves on the planet you just don’t pass up the opportunity to see on their best day. Pipe easily comes to mind. You don’t balk at an invite to get on a boat and sit in the channel when Teahupo’o is lit up. You don’t give up a seat on the cliff when Pe’ahi is at its best, or when Nazaré’s latest storm of the century is promised and expected.

Maverick’s is on that list too. If you’re road-tripping the entire West Coast and just happen to be in Northern California when the Pacific Ocean is churning out XXL session after XXL session in Half Moon Bay, you probably wake up early and get to the docks.

Or maybe you do pass those places up if your gut’s telling you to. Maybe we’re just so accustomed to seeing the status quo for epic waves that we forget the beauty of the otherwise mundane. Blake Bernstein intentionally passed on one of those days at Maverick’s and his instincts gifted him one of his favorite memories.

“There was a really insane run of swell the entire time and I started off scoring a couple of epic days in San Francisco,” he says of the 2,000-mile, December 2020 road trip with his girlfriend. And knowing there would be a ton of photographers littering the channel when word of a new swell got around, he wanted to take a chance on finding something unique instead. In fact, his priorities were so far from sitting behind a lens all day that he woke up with Mavs lit up like a Christmas tree and surfed the first sheltered place he found after scavenging Google Maps and driving through redwoods for an hour.

“I paddled out and surfed my brains out in some of the coldest water I have ever experienced,” he remembers. “Surfing perfect empty waves and looking back at a cascading redwood forest made for a session I’ll never forget. I grabbed lunch and an ice-cold beer after this, and at this point, it was already a perfect day.”

Still, with one more off-the-beaten-path wave on his list, he kept driving north. He stopped. He parked. He hiked past some dunes.

“With a swell this size, a longboarding wave was the last thing I expected to find and it felt wrong to go out there with anything but a nose rider, so I just watched these two guys trade off waves for the rest of the afternoon.”

“For me, this photo encapsulates what every surfer is searching for; whether the wave is two feet or 10 feet, there is nothing better than scoring a perfect wave with your best friend, especially with a jaw-dropping backdrop like this. This was one of the most beautiful days of my life, and I’m glad I have this photo to remember it.”

Editor’s Note: The All-Time series showcases images that stop us in our tracks, from sessions we’d all like to have experienced. Only on rare occasions do nature’s infinite variables align. It’s even more unusual that photos capture the essence of that moment. If you’re sitting on an image (or two) from surf or snow that you think fits the description above and you’d like to be featured, shoot your photo with a few sentences about the day to contribute@theinertia.com