The world is a very serious place these days. It’s depressing, really – full of conflicts worthy of our attention, taking up our time and occupying our thoughts. Then there are the conflicts that shouldn’t take our time or occupy our thoughts. Like arguing with your kids whether the internal modem on their Xbox makes the wireless internet work better. (It doesn’t.) Or if the Bachelor is real. Or even debating the nutritional value of that third post-surf Modelo with your wife (Her: “You’re ruining your workout.” Me: “Meh.”)

Somewhere, way, way down near the very bottom of that list of conflicts worth any attention in January of 2021 is the recent dustup between current World Number 3 Tatiana Weston-Webb and Pipeline surfer Moana Jones. Weston-Webb, of course, has been a threat for years now to take out a world title. Jones has gained a whole lotta respect the last few seasons for working her way up the Pipeline hierarchy. 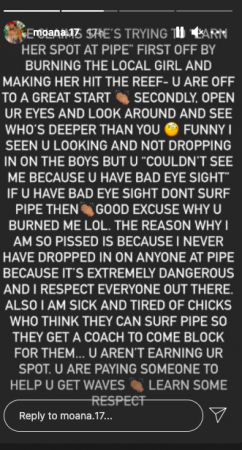 According to internet gossip and Jones’ Instagram stories, during a recent Pipe session, Tatiana goofed and dropped in on Jones (see that here), sending her plummeting towards the iconically-dangerous reef that creates the famous wave. Jones apparently confronted Weston-Webb in no uncertain terms (caught on video), and threw around a number of expletives. (And haymakers.)

Jones took the fight to Instagram, posting the incident to her stories. Weston-Webb issued an apology. Jones’ frustration, she says, stems from pro women not earning their way into the lineup, but instead hiring coaches to block for them, which might be a legitimate beef. (See here.) Duly noted that making one’s way into the Pipe lineup is no small task, for man or woman, so props.

Now, while you may have forgotten about the squabble by the time you’re done reading this, the “Bad Lip Reading” segments stitched together by half-baked Instagram comedians following the forgettable conflict will live on in infamy. Ms. Ivy Miller’s is above – who I admire greatly for never taking this serious world that serious – and one from OCInstanews (Chad Towersey). The only entry missing is Sterling Spencer’s, who, despite threatening to come out of retirement, stayed on the sidelines.

In this often-depressing world, we can still depend on this: surf drama will happen and Instagram commentators in the ether will be there to brighten our day(s).