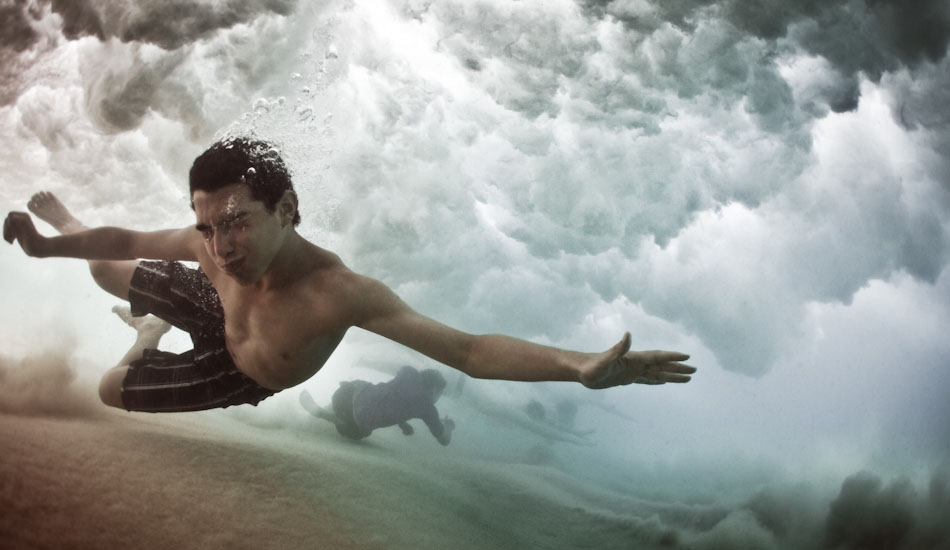 Escape. A young man stretches out to avoid the wave breaking above at Coogee Beach, Sydney. “The first from the underwater series, we were all caught inside by a set. Almost subconsciously, I turned the camera on the swimmers, and it turned out to be a good thing. The next wave punished me and ripped the leash off my wrist, sending the housing into the shorey somewhere - by the time I retrieved it, the swimmers had bailed, and I never got his name." Photo: Mark Tipple. 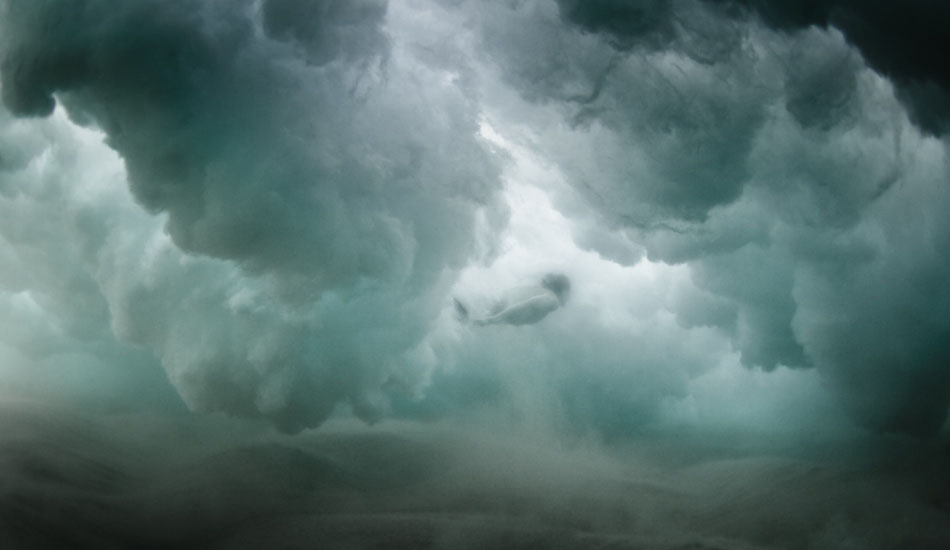 Envelope. A swimmer ducks through the clouds of whitewater at Bronte Beach, Sydney. “Chasing the last light after being in meetings all day, I totally stalked this guy when I saw that there was someone in the water. For this actual wave I was a fair distance away and basically just held the button down on a whim and a prayer. There was sediment everywhere only two frames out of about 16 where he actually appeared amongst the whitewater. I managed to pull it off in literally 25 minutes. Stoked.” Photo: Mark Tipple. 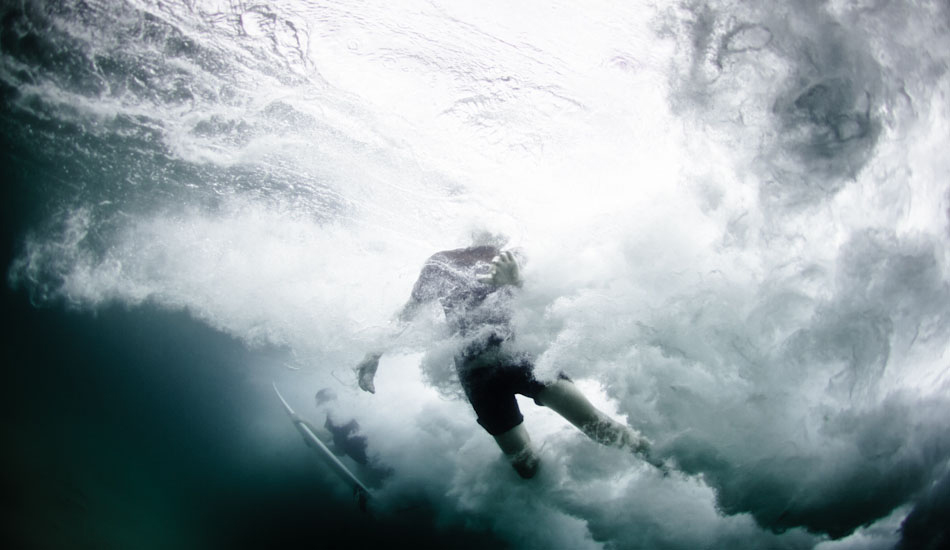 Force. "A surfer struggles against the wave at Bronte Beach, Sydney. At the start, I stuck to the beaches where the good surfers were, thinking that that would get the job done. However, they rarely fell off when the wave is at its most powerful. I started looking for the beginners and the kooks, as they'd fall on takeoff and get rag-dolled a lot more than the good surfers." Photo: Mark Tipple. 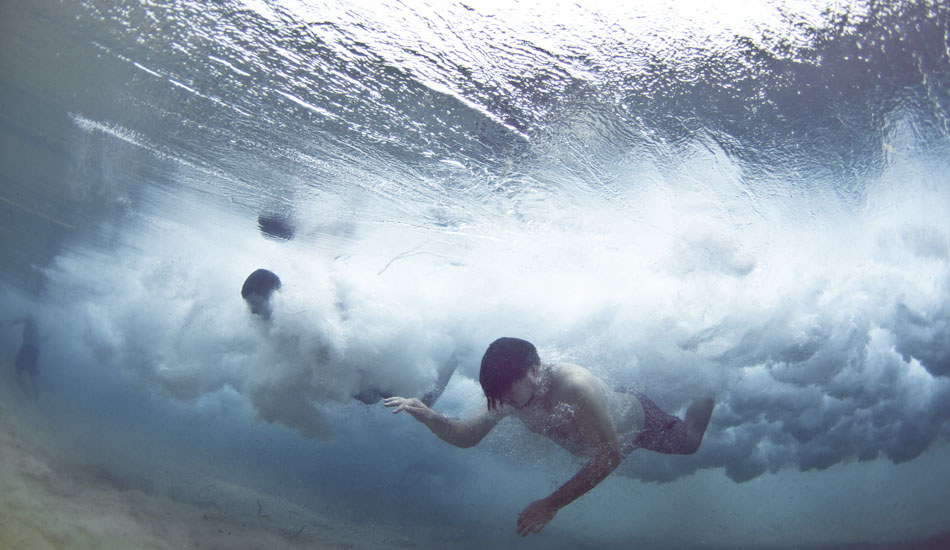 Piano. Two swimmers are engulfed by a breaking wave at Tamarama Beach, Sydney. “A super clear but overcast day made these weird reflections on the roof of the waves, almost a mirror image of the second guy’s head on the water above him. As for the piano, White Houses was in my head for some time after. Still is.” Photo: Mark Tipple. 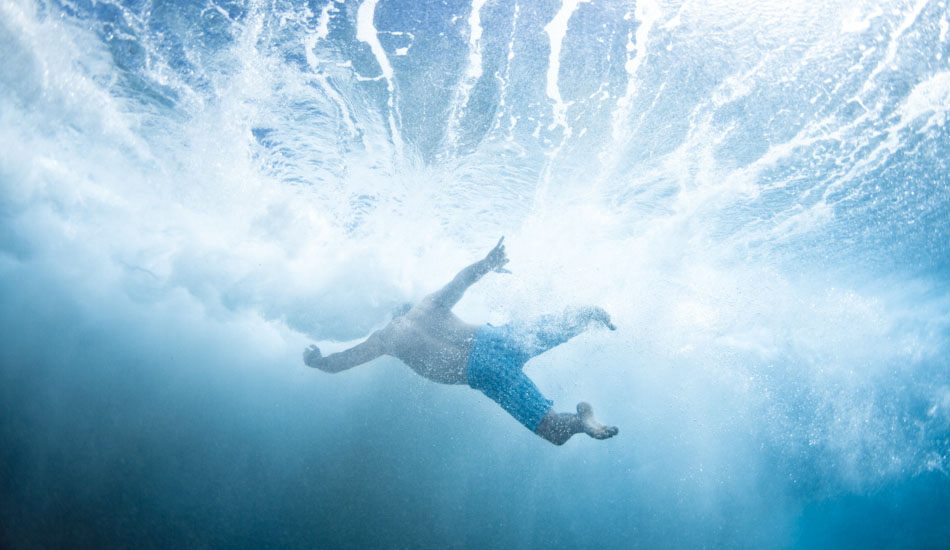 Freak. Mike Hemus backpaddles against the breaking wave as it pulls him towards shore at Elizabeth Beach, Forster, New South Wales. "The whole East Coast was being hammered with messy, turbulent waves; the night before I had nightmares about the sediment it had stirred up. Thinking back, I wasn't scared of the size or the elements surrounding shooting in larger surf, just the sediment. This was taken four hours up the coast, where we had predicted it to be clear. We nailed the campaign in a mere 2 hours. Then we went surfing."Photo: Mark Tipple. 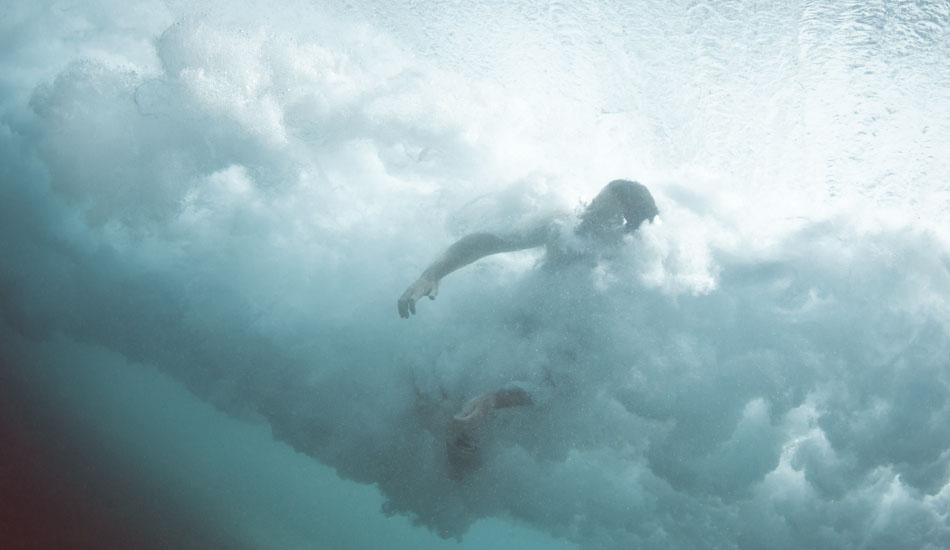 Ethereal. A surfer struggles against a breaking wave after falling from his board at Bronte Beach, Sydney. “As the winter appeared so did the surfers and the underwater wipeout focus. I got a lot of weird looks and a few angry comments from surfers who wanted the cover shot and wondered why I was diving under before they got close to me - usually there wasn't enough time to explain what I was after, so when I had a shot like this on the screen I could just say "this." Photo: Mark Tipple. 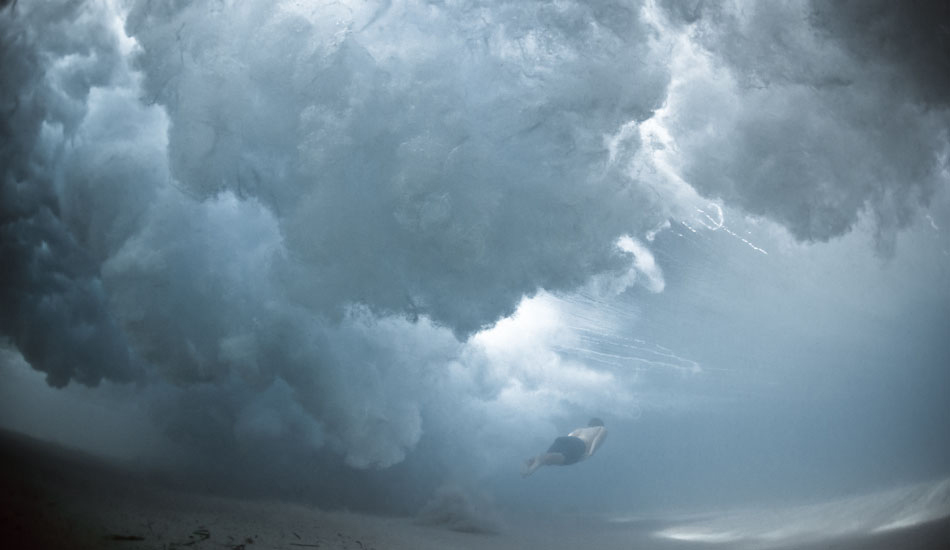 Away. A swimmer returns to the surface after navigating through the breaking wave at Bronte Beach, Sydney. “I started trying to stay underwater for a few waves at a time, waiting for more people to dive under, and actually got this photo during the first day of trying. Most of the time, I'd surface a little light-headed and thinking I was dying, but for those few days it was a pretty fun time. Now I just breathe in between waves. It's heaps easier.” Photo: Mark Tipple. 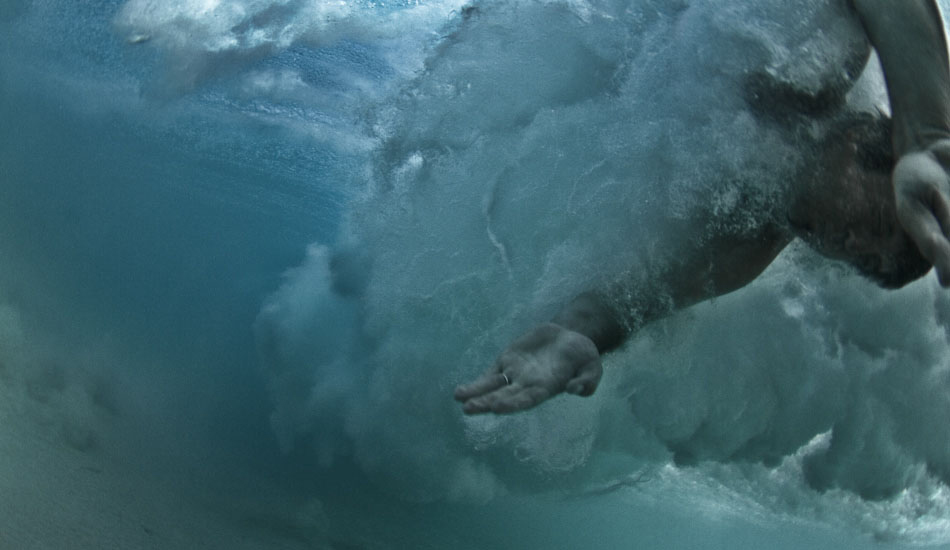 Caught. A surfer struggles against the breaking wave after falling from his board in the South Australian Outback. “On the same first trip with Mike the water didn't look too clear, so Mike was surfing and I was shooting - we linked on a smoker and got a pretty cool (standard) surfing photo. Shortly after, a bomb set with a surfer stroking into it caught me inside. I grabbed the sand and tried to be as flat as possible. A split second later he almost hit me, but as he was being pulled away I shoved the camera in his face and fired off a half-dozen shots.” Photo: Mark Tipple. 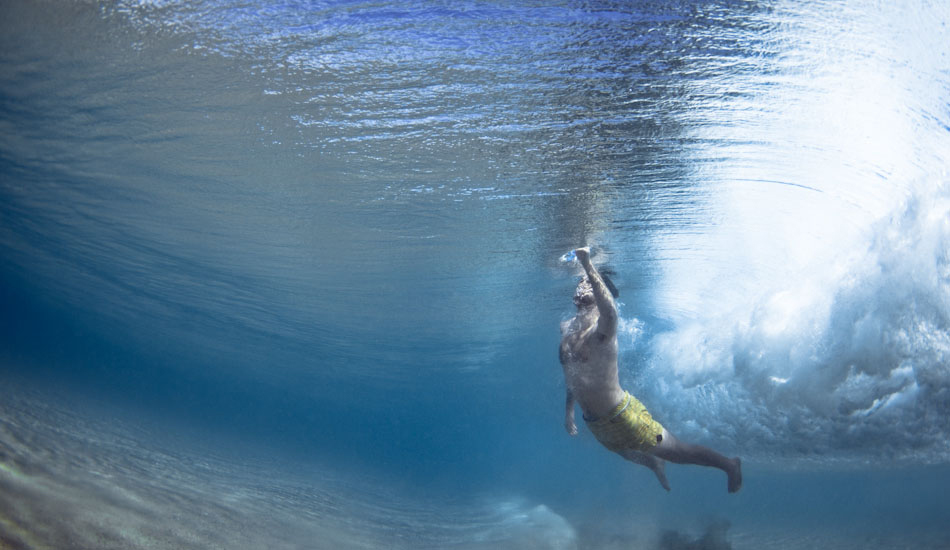 TigerFace. James Thorn punches free of the water after diving under the wave at Elizabeth Beach, Forster, New South Wales. “A huge swell day with another good friend. With water this clear and super fun playful waves, the 'shoot' turned out to just be us mucking around.” Photo: Mark Tipple. 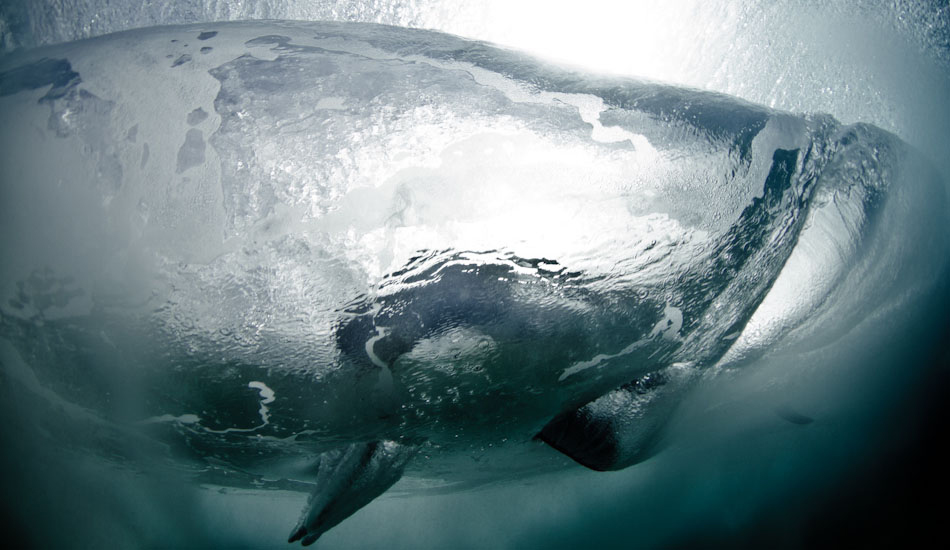 Womb. A surfer falls from his board a moment before it closes out at Bronte Beach, Sydney. “Chasing surfers underwater became a thing through winter. This surfer hit my camera a second later, and we both came up laughing. Well, I did anyway. He was confused." Photo: Mark Tipple. 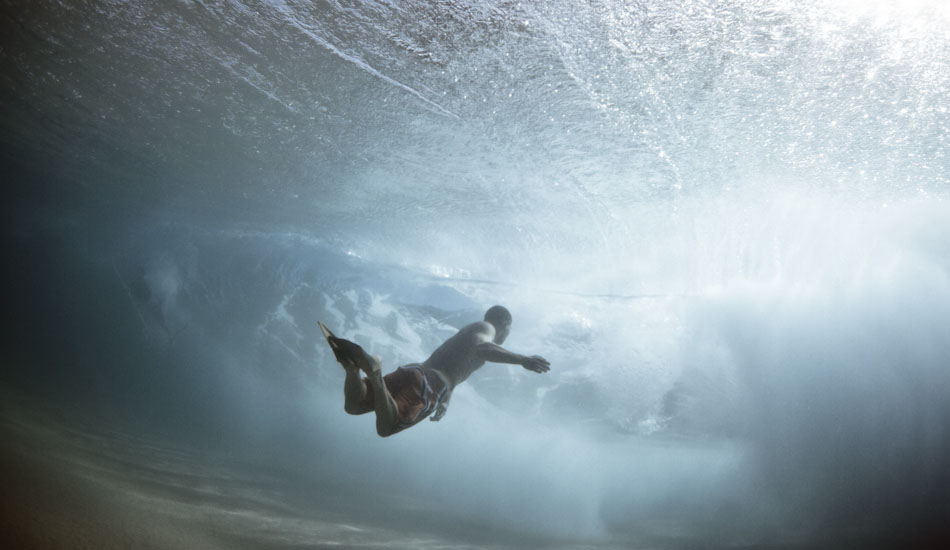 Pause. A swimmer pauses to watch the wave pass at Tamarama Beach, Sydney. “On the last warm day of last summer, the beaches were crowded. I kind of stalked this guy. Out of the 20 odd photos, this one basically reflected what I was looking for: an almost quiet moment amongst the chaos.” Photo: Mark Tipple. 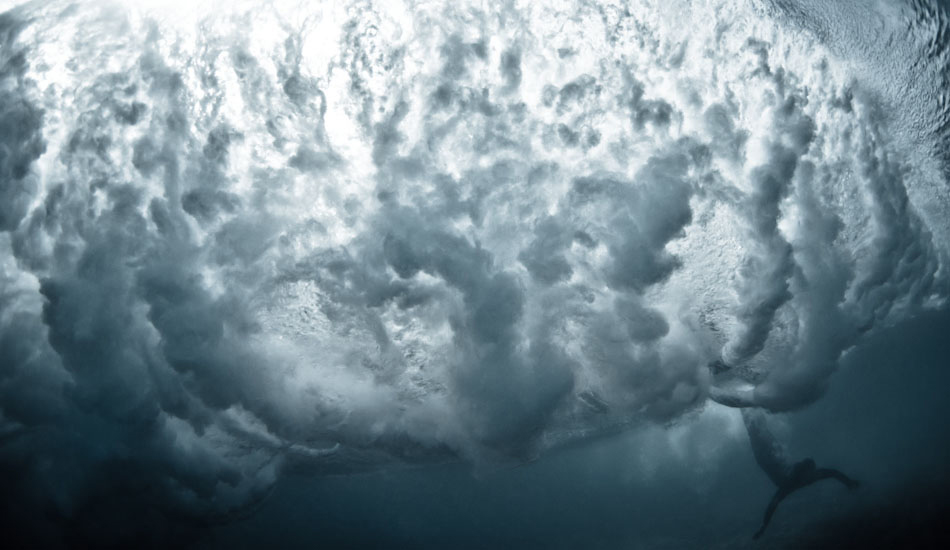 Deep. Scott Lihou stretches for the reef as he tries to avoid the wave above in the remote South Australian outback. “The second trip we've done to South Australia solely for shooting on the reefs. This wave caught us by surprise. We knew it was solid as we paddled out, and got smashed just trying to get through the inside reform. When we made it out the back we only had a few moments to catch our breath before the sets started pulsing. I only shoot in solid waves with people I trust in the water - the wave after this one was bigger…and we weren't so lucky.” Photo: Mark Tipple. 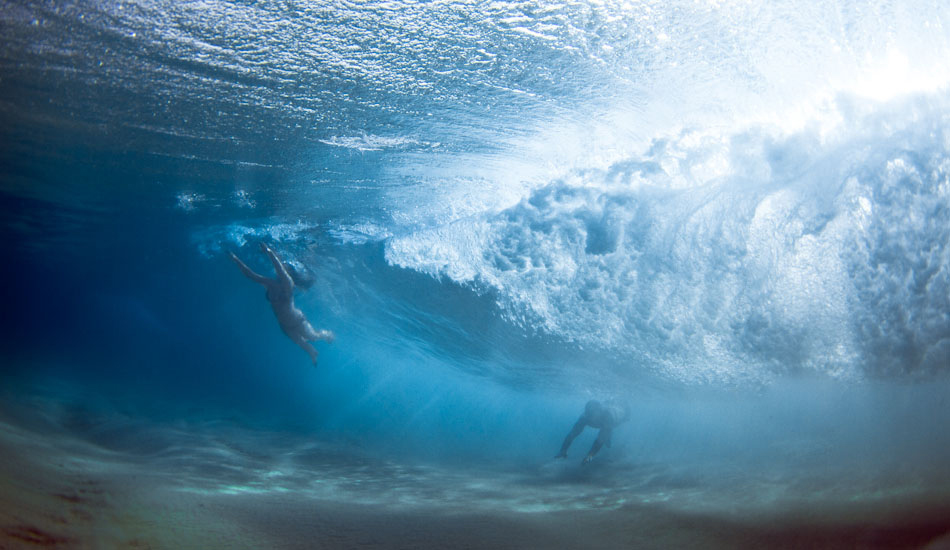 Tom Petty. Swimmers revel in the warm water at Bronte Beach, Sydney. “As I left home shortly before shooting this one,"Free Falling" by Tom Petty came on. The song stayed in my head until I checked the lcd after this wave passed." Photo: Mark Tipple. 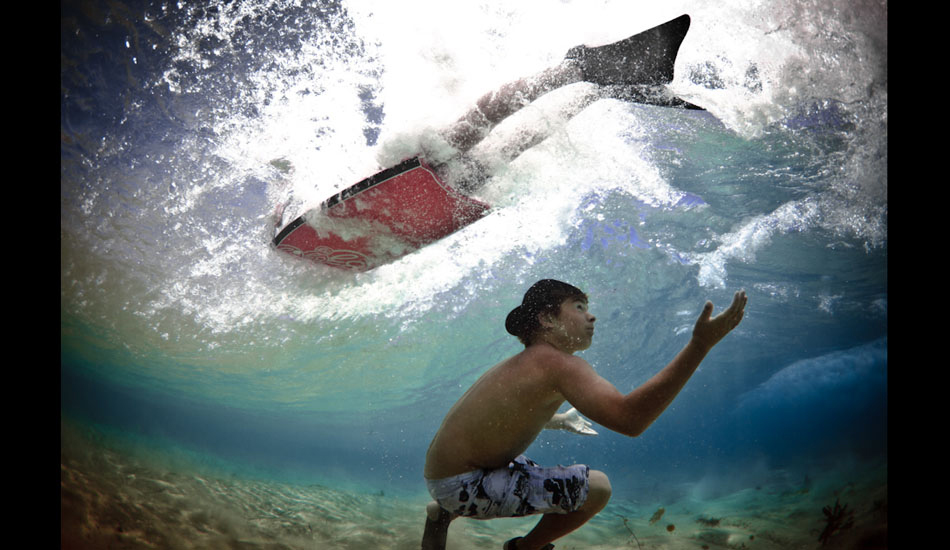 Praise. Local Maroubra grommets play around in the small shorebreak at Maroubra Beach, Sydney. “Even with tiny waves, with water this clear, I couldn't resist shooting. I shot some standard photos of the crew in the 39˚ heat. When one swam out wearing a hat, I was super drained from the sun. I just ducked for the bottom as a wave passed, and surfaced with them laughing. I didn't realize why until I looked at the screen.” Photo: Mark Tipple. 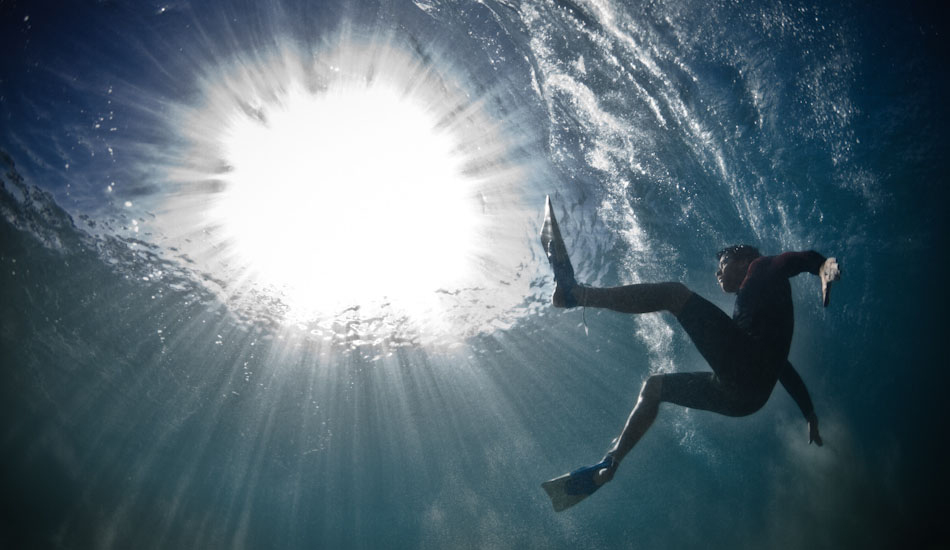 Shine. Mike Hemus looks at the sun as a wave passes in the remote South Australian Outback. “After shooting Escape, I spent a fair bit of time thinking where to shoot and what to do with the project. We drove four hours from Adelaide with a number of angles that we wanted to shoot, and after 6 hours in the water we found that the in-between poses and intended shots were the ones that held the emotion I was looking for.” Photo: Mark Tipple. 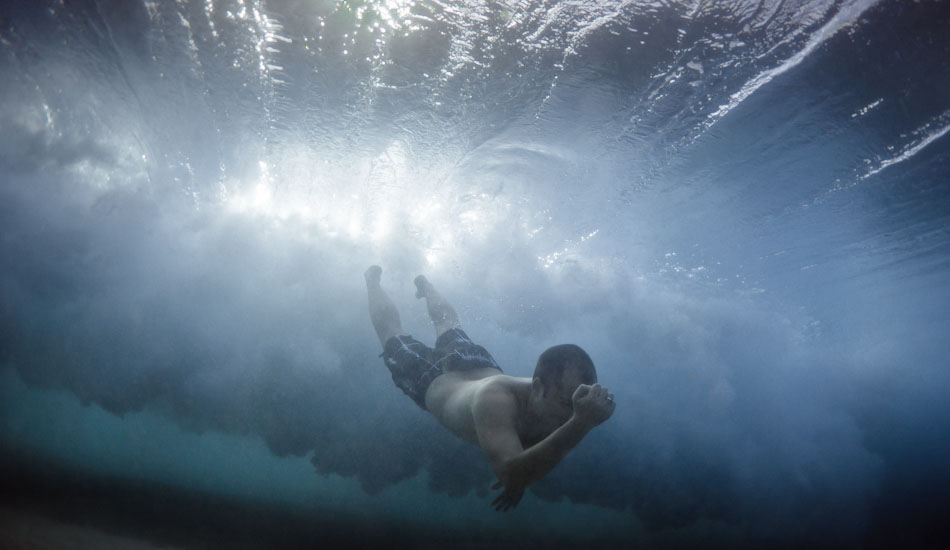 Power. A man gestures with relief after making it through the breaking wave at Bronte Beach, Sydney. “I raced to the water to shoot the last light, and in my stoke I ended up running into this guy underwater. I was looking for this angle and kept dolphining towards the swimmers behind the wave, but turning off before we hit. I wasn't totally paying attention on this one.” Photo: Mark Tipple. 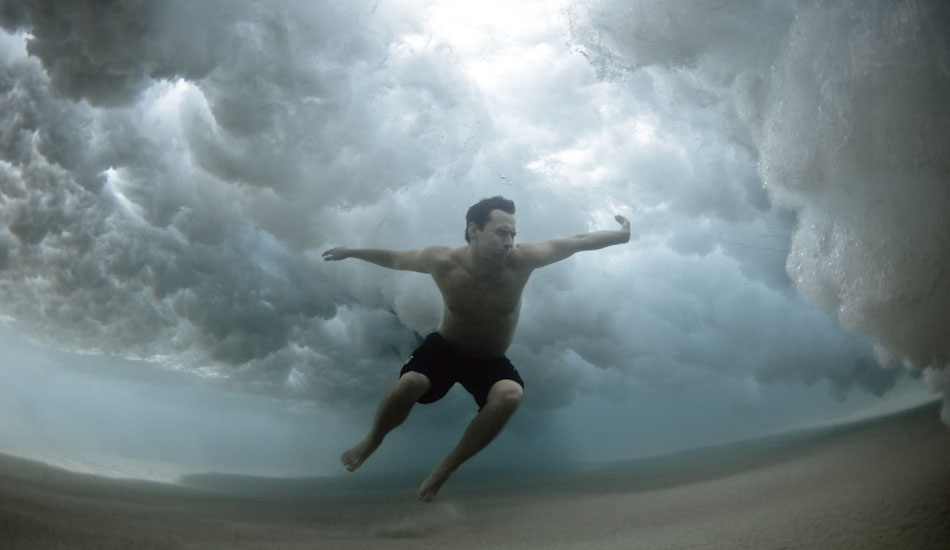 Moment. A man reaches out for stability as the second cloud of whitewater approaches at Bronte Beach, Sydney. “There were some pretty sweet waves this morning - heaps of surfers, but not too many swimmers. I spent a few hours shooting barrels and standard surfing shots before a few swimmers came out. As a set approached, I raced over to the corner where they were. Three waves and about 75 photos later, this one was way better than any surfing photos from the day." Photo: Mark Tipple. 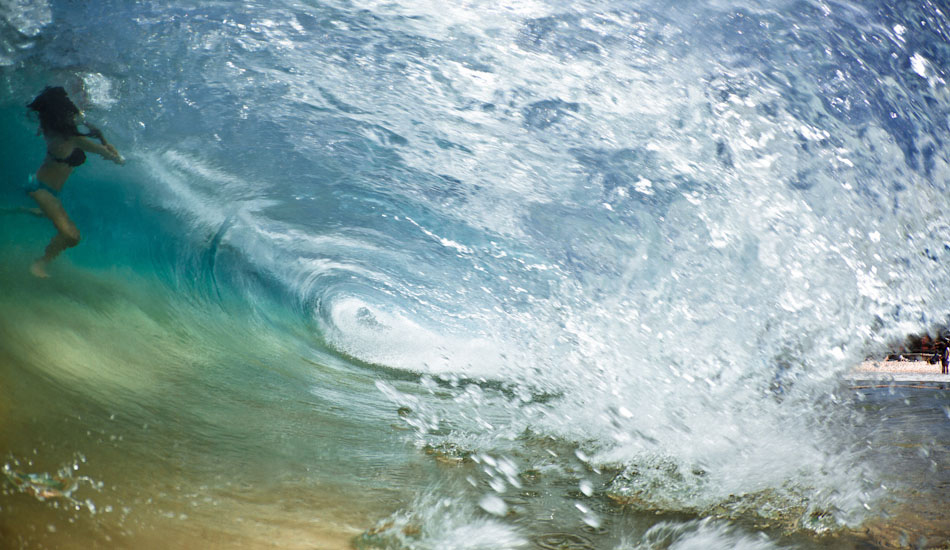 Frozen. A girl is almost frozen in the face of the breaking wave at Coogee Beach, Sydney. “This day was barely waist high. I’m super stoked on the photo though - I'd love to say it was totally planned and choreographed, but it's not." Photo: Mark Tipple. 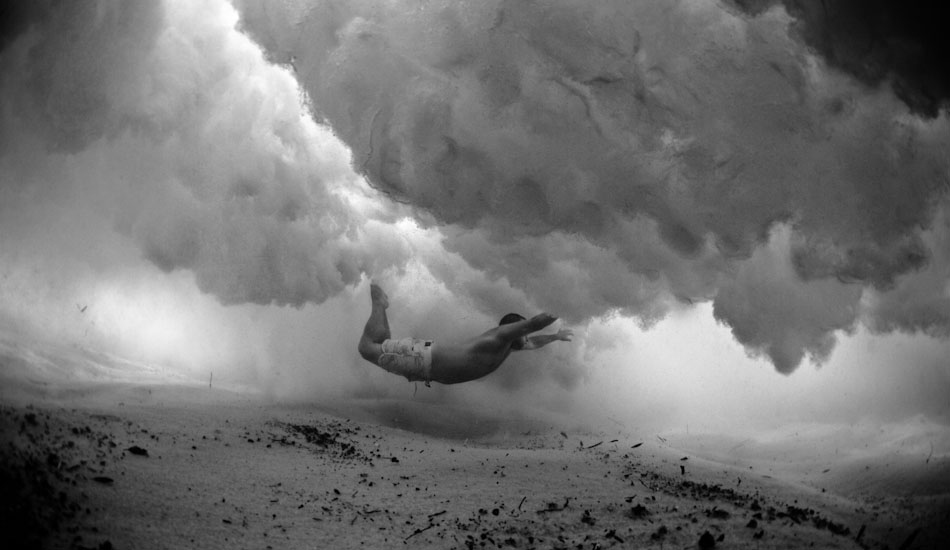 Parachute. A man floats just above the ocean floor as a wave breaks above him at Bronte Beach, Sydney. “After a year of shooting in the same area, this is the clearest the water has been. Not sure what it was - sand sediment is a killer - just wish it was more often.” Photo: Mark Tipple. 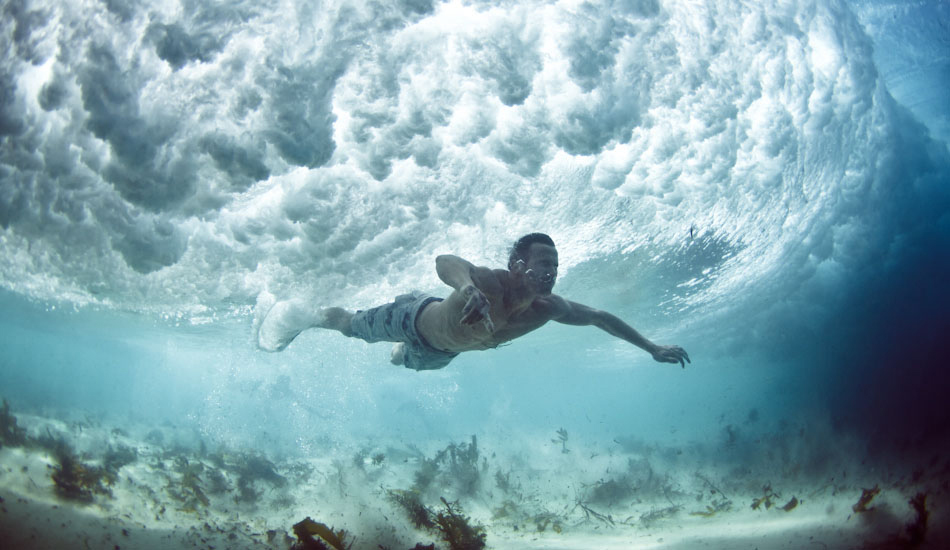 Streak. A swimmer narrowly avoids the breaking wave above at Bronte Beach, Sydney. I've tried to recall what happened, but I can't. Basically a wave came, I dove under, he dove under and I pressed the button. Turned out cool." Photo: Mark Tipple.

Over the last three years, Mark Tipple has dedicated himself to a unique form of underwater photography that he calls The Underwater Project.

In late 2009, Tipple was looking for ways to showcase the humanitarian projects he was working on, and after years of photographing surf, he happened upon an image that would re-direct his career. While shooting shorebreak, Tipple dove under a wave and noticed a group of kids next to him, thrashing and struggling under the whitewash. He turned his camera, fired off a quick shot, and realized that this was the angle he’d been looking for. That picture, entitled Escape, gave birth to The Underwater Project.

An “ongoing reportage of Australia’s relationship with the ocean,” The Underwater Project has gained much acclaim in mainstream media. It’s Tipple’s wish, though, that recognition for the UWP will transfer to his documentary series focusing on social justice issues. “Some of the people that I’ve worked with in Fiji and Indonesia deserve a lot more recognition than a couple of guys splashing about in the ocean. Hopefully there will be a flow on effect from The Underwater Project to the documentary series,” says Tipple.

Having worked closely with organizations seeking social change in Australia and surrounding countries, his progression has seen the development of Gallery for Justice, a not-for-profit that aims to “bridge the gap between people with a mind for social justice and traditional print media.” Essentially, they’re creating a platform where social justice takes precedence over celebrity gossip.

Although Mark’s portfolio is extensive, he’s found that many corporate media and sponsored exhibitions avoid shows that focus on subjects as serious as social justice. “Advertisers don’t want to see their advertisements on the other side of a social justice or a poverty story, and they’re funding the magazines. All these amazing stories are being shied away from.”

To see more of Mark’s work, visit Mark Tipple.com, The Underwater Project.com, or Gallery for Justice.org