He’s not actually holding the book. But he likes it!

The President is a smart man. Like many other smart people, he reads a lot. He also grew up in Hawaii, and as such, riding waves is a part of who he is. So when The White House released Obama’s summer time reading list, it came as no surprise (well, a bit of a surprise) that William Finnegan’s Pulitzer Prize winning autobiography, Barbarian Days, was at the top of the list.
Here’s the President’s list in its entirety: 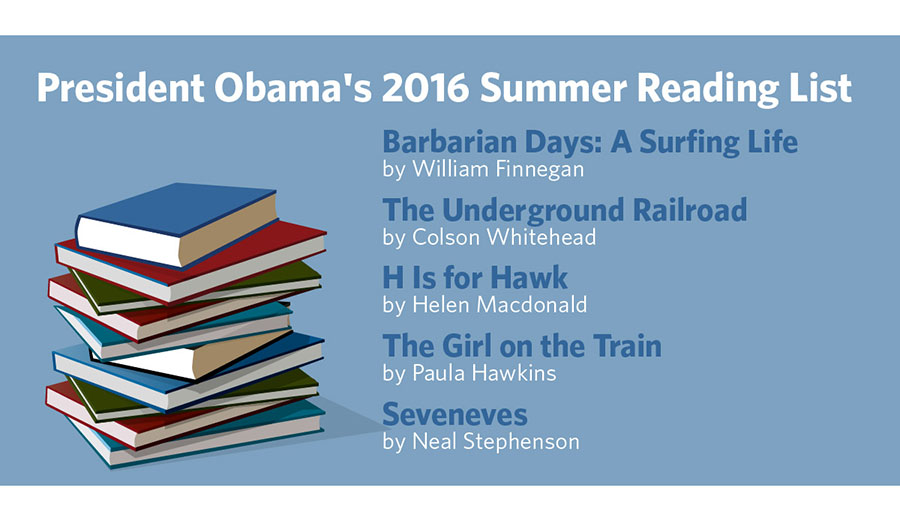 Barbarian Days: A Surfing Life by William Finnegan, winner of this year’s Pulitzer Prize for biography/autobiography. Finnegan is a political writer for the New Yorker.

The Underground Railroad by Colson Whitehead. A novel about a runaway slave, it is the latest pick for Oprah Winfrey’s book club and was excerpted in a pullout section in Sunday’s New York Times.

H is for Hawk by Helen Macdonald, a memoir about how raising a hawk helped the author deal with her father’s death.

The Girl on the Train by Paula Hawkins, best-selling thriller, the movie of which is to be released in October.

Seveneves by Neal Stephenson, an apocalyptic novel about Earth in the wake of the moon’s shattering, by the author of “Snow Crash” and “Anathem.”