Pride of Place: Happiness is a Heart and a Hut 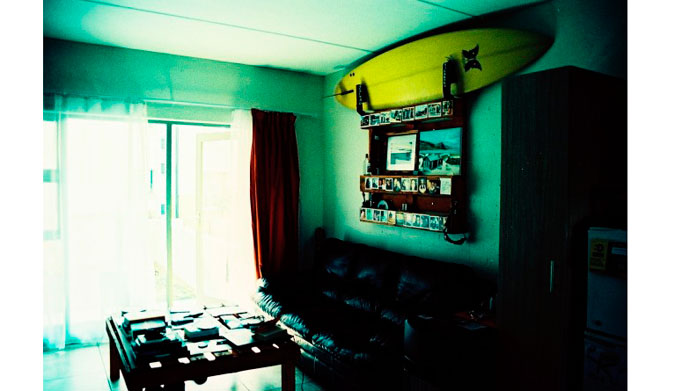 “I just wonder if the nearest Walmart will have a semi-big wave gun rack with a space or two for a bottle of Kentucky Straight.”

I recently relocated from Kalk Bay, South Africa to Johannesburg for a season or two, in chase of the dollar instead of the dawn patrol. Sometimes that happens to people–they love to write letters to surfing magazines about their sorry plight. The almighty dollars ain’t exactly rolling through the door yet, but I’ve managed to move into a so-called townhouse in the suburbs, where I find myself in need of something known as furniture (if one spends most of one’s life chasing dawnies, one tends to land up not owning much of it).

So I bought a few old pallets from Builder’s Warehouse for a hundred bucks each and I was sitting (on the floor) alone of a Saturday morning pondering my fate, when my eye fell upon my prized Pierre De Villiers 8’2 sulking in the corner. I decided to give it pride of place in my lounge, in memory of the few epic sessions we shared before I moved: a few at the Kom, Oliphant’s, the one at the Factory, and in service of the knowledge that those won’t be my last.

The pallet took a little re-engineering, some rawl-bolts to the wall and a coat of PVA. The framed picture on the left I took myself–it’s of hardcore local Andrew Wilsnagh pulling in at the reef late one afternoon. I made the frame myself, too. The painting on the right I found for 140 from the place that used to be the Kalk Bay post office. It reminds me about something I once read: “The only thing you need to be happy is a hut and a heart.” (It might help if your hut happens to be on the beach at Witsands). The hand-plane I made from a piece of driftwood I found on the beach at Eland’s Bay. The roll of Kodak E100 in the middle of the shelf must be one of the last remaining in the world, literally. I’m sure there will be a classic frame or two on there when I eventually get around to having it developed.

There’s a matching coffee table in the works. My Joburg friends ask me why the hell I don’t just pop down to the nearest Walmart. I just wonder if the nearest Walmart will have a semi-big wave gun rack with a space or two for a bottle of Kentucky Straight.