Bethany Hamilton and the Teeth of the Tiger 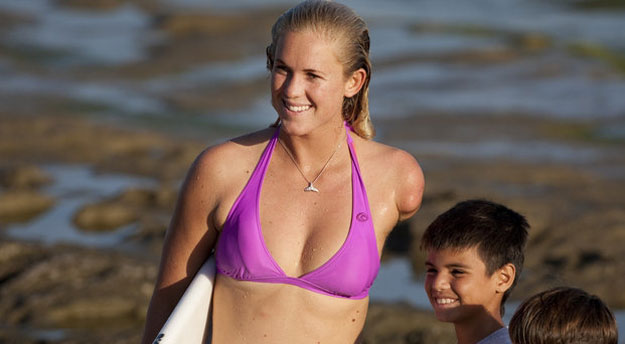 The next day, after word had spread through the islands, Laird Hamilton called his father, the legendary surfer/fisherman Billy Hamilton, and told him if he didn’t go out and kill this fucking shark, he was going to do it himself. Fourteen days later, much to the outrage of the indigenous Hawaiian population, Billy and Ralph Young hauled to the beach a fourteen-foot tiger shark with a ragged dorsal fin. It took a gutted five-foot gray shark as bait and a barbed hook the size of dinner plate. Butchering it offshore away from prying eyes, they found no evidence of Bethany’s arm, her watch, or the 18-inch semi-circle of surfboard that the shark had taken with it. The shark would have long before regurgitated the irritating fiberglass and foam and probably the arm with it. However, removing the jaws and matching them to Bethany’s board revealed a perfect forensic fit to within 2 micrometers. Aside from the jaws, the only other part of the shark that was saved was a section of its dusky, striped skin. This skin was presented to Boy Akana, local Kahuna, who would fashion it into a ceremonial drum to call on the ancient spirits to calm the seas. Governor Lingle would decree in a public statement that the matter was now closed and that the tourist industry should “just get back to normal”.

Seven days later, Bethany Hamilton pays a visit to Ralph Young’s compound with Billy Hamilton and her father Tom. She is there to visit the jaws that took her arm. Crouching beside the bloody things in the middle of the lawn, they come up to her shoulder. For long moments the men stand around uncomfortably as she curiously pokes at the razor sharp teeth one by one. Then she looks up at Billy Hamilton and asks if she can have some of the teeth for a necklace she would like to make. An amulet to protect her in the future. The men are so stunned that nobody speaks.

Upon leaving the compound with her Father, Bethany is overheard saying to herself, I hope I don’t have dreams.

On the way home, with a sleeping Bethany next to him in the car, Tom Hamilton begins to hum a tune he hasn’t heard since he was in the U.S. Navy as a young gunner’s mate. His lips move slightly as he recalls the words of the Navy Hymn:

“Eternal Father, strong to save,
Whose arm does bind the restless wave,
Who biddest the mighty ocean deep,
Its own appointed limits keep,
O hear us when we cry to thee,
For those in peril on the sea.”

Driving on through the rain, these are the only words Tom Hamilton can remember.

He reaches out to softly take his daughter’s hand, but it is not there.