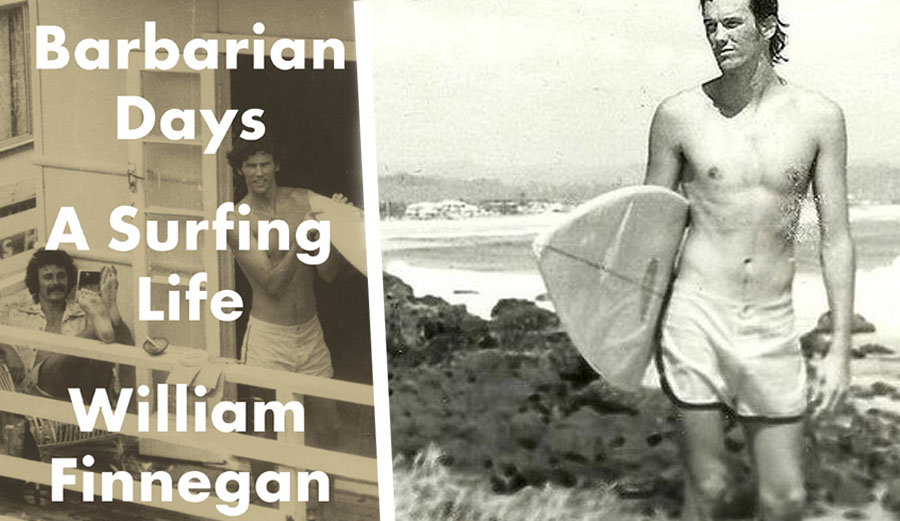 I’ll just come out and say it: I hate book reviews. I can’t imagine how authors must feel toiling for months or even years over their life’s work–battling publishers, edits, and rewrites–only to have some smug staff writer, denoted non-specifically as “editorial board,” attempt to assert his personal opinion as cold hard fact. Because, after all, reviewers are objective, right? So before I go on, if you’re reading this, Mr. Finnegan (doubtful) just know that you write for the New Yorker and I sir, well, don’t. That says it all.

In spite of these feelings about book reviews, William Finnegan’s recent addition to the surfing literary canon, Barbarian Days, compelled me to write one, albeit a little late, I’ll admit. The book came out in late July. And while some have gone so far as to call Finnegan a kook–using San Diego’s most notorious editorial graffiti wall and preserving their anonymity (see above)–it’s obvious he’s anything but.

Finnegan’s memoir follows a lifelong surfing habit–nay, obsession–to the ends of the earth and back again. He’s a true die-hard with connections to surfing enclaves as unique as San Francisco and New York. As a surfer, I found it easy to get lost in Finnegan’s sharp prose about the act of surfing and poignant observations of the ever-changing surf culture. Even sharper was his ability to capture the all-encompassing power of the obsession. For surfers it’s ironic–in the most comforting sort of way–that our surf stoke is fueled by the fleeting nature of waves. It’s what causes us to blow off school, work, “normal” life responsibilities for an epic dance with impermanence, a microcosm of life in general. Indeed, the slight imbalance for the sake of fun and thrill is what earned surfers the nasty “lazy” stereotype in the first place.

Finnegan’s global circumnavigation in the name of stoke spans much of the book. It’s a tale of self-discovery. A cyclical storyline (pardon the pun), where a young man shirks responsibility only to realize he can’t be Peter Pan forever and must slowly give in to the demands of adulthood, i.e. the “real” world. Even aging plays a role in tempering Finnegan’s attraction to larger waves over time, and frequency of travel. For the uninitiated, I worry that this is the lesson: that surfing is something Finnegan slowly gives up on over time for the sake of more meaningful endeavors.

But Finnegan drops clues to show us this isn’t the case; after all, it’s called Barbarian Days: A Surfing LIFE, right? The book navigates surf-related trends that parallel life itself. We intimately follow him through his growth as a surfer, his desire to test himself in challenging conditions, and the familiar quest for the perfect wave. It’s a path most surfers can relate to, but blended with the classic coming-of-age story arc. Throughout the process the reader sees not what Finnegan is thinking through a window into his world, but instead is granted total access through bouts of intimate self-psychoanalysis. As the story continues, we see growth from a wanderer on a budget, traveling the world in destitute conditions, to a journalist and family man with a consistent income. And throughout the journey, surfing is central in every way, a relationship that changes, certainly, but never falters.

Surfing is the true protagonist, and Barbarian Days is a love letter of sorts. Emotionally, I’ve never before watched a surf film or read a book that’s excited me to grow old with surfing. This book accomplishes that. Don’t get me wrong, reading about dredging barrels at Kirra or reeling Honolua was enough to fire me up to get in the water. Think 50 Shades of Grey for surfers—major surf boner. But what Finnegan does in this book is truly amazing. He successfully taps into the innermost desire of core surfers like himself: to surf for a lifetime, and share it with the world.

It also highlighted, for me, one of the ultimate existential questions of a surfing life: is it selfish? Finnegan battles this notion constantly—especially in his later years when he recalls tempting fate at a big day at Makaha. During a long hold down, his thoughts went straight to his daughter, of which he explains, “I am needed.”

And it’s this desire to surf for a lifetime, hit a spot while its firing, and balance it all with life’s responsibilities that make surfing unlike anything else. It’s not stationary, it requires being able to drop everything at a moment’s notice. Indeed our lives begin to mirror the ocean: swell energy equates to our will to do anything to get in the water. It’s a dance, I hate to say it, where only a surfer knows the feeling. It’s the essence of stoke.

You can buy Barbarian Days: A Surfing Life here.