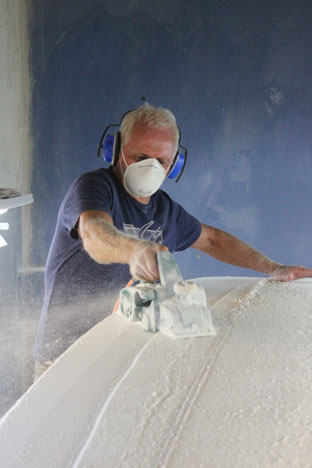 Bob McTavish, the man who invented the shortboard Depending on who you ask. Photo: Casey Butler

Bob McTavish: Inventor of the shortboard. Depending on who you ask. The same Bob McTavish spends a lot of time pondering how the longboard would have evolved if the shortboard revolution had never occurred. Between pondering and surfing and shaping, Bob McTavish knocks on strangers’ doors and dialogues on topics such as the meaning of life and Armageddon. He’s a Jehovah’s Witness. He doesn’t look much like the door-to-door evangelists of my childhood, who I remember as, frankly, a bit creepy. Bob has expressive eyeballs and a genuine smile that almost ventures into zealous territory. He’s warm and familiar. He’s 68. He looks 68. That’s not a bad thing. He’s got a full head of closely cropped, white hair and occasionally dresses those eyeballs with dapper reading glasses. He’s not what you’d call an enormous man. He speaks candidly about the difference between shapers and designers, why boogie boarding’s one of the greatest inventions ever, the next surfboard revolution, and where longboarding went astray. When he is interrupted by one of the many sporadic mechanical clamors in his factory, he pauses, tranquilly, and then, when the atmosphere is clear of interference, he resumes exactly on point.

On a warm Wednesday in February (Aussie summertime), Bob McTavish leads me through his Byron Bay factory. He strolls from the store–akin to an auto showroom, but with vintage Bluebirds on the walls–into the glassing room and points to a stack of freshly carved foam forms resting on latitudinous brackets to the left of the entryway. These are very limited-edition reproductions of a 1960s board. The tail is geometric. Each pristine deck is signed in pencil, waiting to be covered in fiberglass. That’s the job of Billy McLean, McTavish’s longtime associate and pal. Billy is one of the best glassers in the business. He’s currently working on custom, multi-pigmented mals that require cutting, masking, and layering.

The boards-in-progress rest on evenly spaced workhorses, like freestanding Greco-Roman warriors in the Louvre. Stalagmites of rainbow-colored resin rise from the floor beneath them. Everything is done by hand at the McTavish factory and evidence of craftsmanship, many times over, literally grows on the place.

Depending on what you know of McTavish, this image may clash with the one you have in your head. His oversized “M” logo is often seen on boards that aren’t made here in the factory. They aren’t made by hand, and they aren’t even made on this continent. Bob McTavish is one of a couple of shapers with Global Surf Industries contracts. Pop outs.

“There’s no such thing as pop-outs,” McTavish says without much fuss.

He originally linked up with GSI after some partner trouble and reshuffling. “I was going to walk, but these guys [his new partners] offered me too good a deal,” he says. “They told me they’d hooked up with GSI. I was keen. We had good designs, but we weren’t tapping the northern hemisphere market. I’ve always believed that it’s not where a board’s made; it’s how well it’s made. And how well it’s designed. Is it going to perform?”

“I’ll be quite controversial and outspoken and tell you that I don’t think there are many good shapers in the world,” he continues. “They’re good as far as being technical reproducers, but a machine can do that. There might be a couple thousand shapers in the world–but very few designers. Al Merrick’s a designer. Along comes Dane Reynolds and he says, ‘I want to saw the tail off.’ Al can go, ‘Well, look, this is what it’s going to do.’ There are very few guys who can do that, and even fewer guys who can see the need for something in the surf and then design it. That’s a real designer.”

He won’t say as much, but McTavish is, himself, a real designer. And all of his boards produced by GSI are made to precisely specified dimensions that he has determined via a heap of R&D. He’s happy for them to bear his logo.

The recognizable “M” was designed by Bob’s son, Ben, when he was 15 years old. It saved the company, Bob says. At a time when surfboards–especially longboards, especially custom ones–weren’t exactly selling like hot coats, er, hotcakes. Ben drew up the galactic capital “M” (complete with orbiting bluebird) and said, “Make it huge, Dad, so you can see it from space.” So that’s what they did. And pretty soon, people started noticing McTavish’s boards in the lineup. The orders started piling in.

“We go flat [out] all year and we catch up to our summer orders toward winter,” McTavish says. Nearly three quarters of their board sales are direct and Bob knows a “helluva lot” of his customers personally after all these years. I ask who his longest-running customer is.

“Terry T-shirt,” he suggests after some audible musing. “I went to jail with him in ’63 in Byron for having long hair and no money. Terry gets a board off me every year.” For 40 years.

In an upstairs office, in the southeast corner of the building, sits Bob’s orderly desk. Above it, on the cerulean walls, hangs a corkboard that is not so much littered with photos and inventories and Notes To Self, but shingled with them. Pinned front and center, by red tacks, is a large piece of card stock on which Bob’s written, “LONGBOARD EVOLUTION VS. SHORTBOARD REVOLUTION.”

“I’m actually visiting what happened after ’67 in shortboards, stretching it out, and going deeper into it,” he explains. “And then on the other side, we’re going into what would have happened if the shortboard revolution hadn’t happened.”

“When we went to the shortboard, we threw trimming away,” he says. “When modern longboarding came back, it came back with a lot of rocker. Modern longboarding’s a new sport. You can carve a longboard. Okay, the resurgence of logging since Joel Tudor. Their [logs’] ability is limited by slow-reacting turns, so the logical thing to me was to make a fast-reacting pivot turn and still incorporate that wonderful trim, which would have been a logical step in ’67, ’68, ’69. It would have happened if we hadn’t gone shortboard.”

I promised my buddy Alex that I’d ask Bob about the shortboard revolution, and at this point, I figure it’s safely out of old news territory and into the “Historic Achievements” category.

“How’s inventing the shortboard?” I ask.