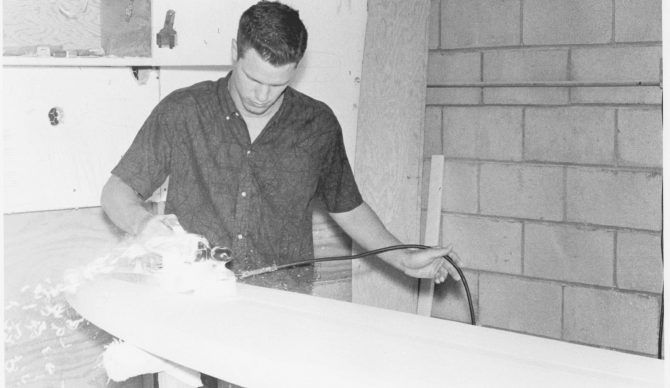 On Sunday, July 11, Rich Harbour passed away at 77 years old surrounded by family and friends in his Seal Beach home. The surf shop he opened on Main Street in 1962 still stands today in its original location, making it the longest running surf shop of its kind, according to Harbour Surfboards.

Of all the stories the surf world can tell of its most memorable shapers, Rich Harbour’s is as iconic as they come. The longtime Seal Beach surfboard shaper and shop owner got his start at just 16. His own board was stolen and he had no other option left to get back in the water but to make one. It was “terrible,” he once said. But surfboard number two wasn’t, and soon after, friends started asking Rich to make them boards, too.

That was the spark for a teenage Rich Harbour to use his father’s name in order to secure a $15 business license and get Harbour Surfboards off the ground. Harbour had famously marked that first board with a “1” and made sure to add a number to each board he built since then. According to the Orange County Register, the last board Harbour handcrafted himself got the number 32,680 in 2019.

Harbour’s legacy as a shaper and businessman runs deeper than his six-decades-old shop. The Harbour Surf Team was legendary, and Harbour himself will be remembered mostly as a mentor to countless people who went on to shape the sport’s history. Dick Brewer, Robert August, and Tim Stamps were just a few names who were part of the Harbour staff at one point before stepping out on their own.

“It was truly the shaping ‘Dream Team,'” he said about building out shaping stalls and recruiting members to his shaping team during the 1960s. “This was the golden age of surfboard making.”

“I think he would say he lived a complete life with no regrets and (he was) happy he accomplished everything he could,” longtime business partner Robert Howson told the OC Register. Howson bought and now operates the Harbour Surf Shop retail operation.

The community is still working on plans for a paddle-out celebration to honor the legend. Harbour is survived by his wife, Helen Harbour, daughters Melissa Harbour-Hennessy and Carrie Harbour-Nolan, son Paul Lawler and five grandchildren.