Riding the Nose Into a Dead End 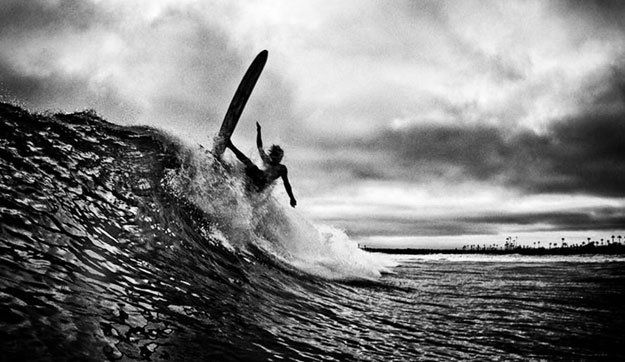 Bringing it back. Photo: Jeff Farsai

Here is the gist of a conversation I overheard recently on the day after a fun-type longboarding contest:

“What those guys were doing yesterday in those finals?” He said. “I was around in the ’60s, and Corky Carroll, Dewey Weber, all those guys, they were doing the same thing then as you could see yesterday: Nose rides, spinners, hanging ten, hanging five… they used to do it all then.”

I watched many of the heats in that recent longboarding contest. I can’t think of one roundhouse cutback I saw all weekend, and hardly any off-the-lips. Instead guys stalled their boards, waited until they had almost lost the wave, and then cross-stepped to the nose, tipping themselves back into the wave to gain just a few more seconds of nose-time.

And if they were going to overrun the wave, instead of riding out onto the shoulder and carving a cutback, they would stall-check the board, flick it back 120 to 180 degrees, then flick it back around again. Having lost speed and stalled, repositioning themselves back in the breaking wave, they would then cross-step to the nose and hold the nose ride for as long as possible.

If the wave and their skill cooperated, they could put the weight of both feet right up there on the nose. One or two surfers, at times, could balance with one foot on the nose and use the other foot (symbolically, I think) to paddle with.

If, on top of this, they could execute a spinner and a switchfoot flick stall cutback as they skipped back from the nose, then that longboarder had established his mastery in the setting up of nose riding opportunities.

People had great fun at the contest. There was an old-style relaxed atmosphere, and I enjoyed it. It definitely has its place, and people have an obvious right to enjoy what they want. And at that contest, people young and old, were sharing a type of dance.

It was a type of dance where it was clear the epitome of skill and style was to be on the nose.

The excessive emphasis on nose riding developed 50 years ago. It’s a complicated dance and nose riding has its own history.

Surfers that wanted change in the late ’60s and early ’70s threw out the baby and the bathwater. The whole “nose riding, hang ten, tricks thing” went out, and with it went any more balanced use of a longboard. Soon you couldn’t buy or sell a longboard – no one wanted them anyway. Boards dropped to 7’6’’, then 7’, then even further and soon, everyone wondered how short you could go. I was riding a 5’10’’ by 1970.

Surfing was now more about functionality, flexibility and driving power turns. It had rejected “tricks,” and nose riding is usually a trick. It’s rarely necessary for the best trim and speed to get right up on the last foot of a longboard. Cross-stepping up, placing and keeping five or ten toes over the nose doesn’t make for the widest creative use of a wave face – it’s actually a pretty limiting position to be in.

It looks skilled, I know. So does tandem surfing. There is skill and grace there, I grant you.

But imagine if Kelly Slater’s next development was to design his short boards so that he could frequently perform one or two short, neat cross-steps and place ten toes on the nose of his 5’ 8’’ while trimming. Every now and again, he would get back to center, whip a carving cutback high in the lip, spin back around into trim and get back to ten toes over the nose. Kelly would also regularly stall his 5’ 8’’ and then cross-step to the nose and speed off down the line.

Would we be impressed?

In a nutshell, here’s what I am suggesting: there are other dances. Some people like it and that’s fine. Some people are into the retro school of surfing – that’s fine too. I’d like to see a school of longboarding that had a similar approach to nose riding as most WCT surfers have to claiming a wave: don’t do it unless you just really can’t not do it.

I’d like to see a school of longboarding devoted to staying off the nose. That’s a negative definition, I know. But the USA was set up on a negative definition: being independent from the tyranny of the British King. They threw the tea in the water and rebelled. And found a new way of doing things.

I think we need some healthy rebellion in longboarding circles.

I see some excellent young longboarders in the water. Currently I’m on a three-month surf trip on the California coast. Too many of those young longboarders though, after excellent wave choice skills, smooth turns, etc, are looking to get up there and stand on the nose. Fine for some – but for everyone?

There’s a whole world out there to be explored. Shortboarding has done it. Modern longboarding has borrowed somewhat from the shortboard evolution but still, the nose is too often where it’s at.

Stalling simply to be able to run to the nose often wastes other opportunities to build speed and drive all over the face and more. Longboarding needs something of the spirit of the early ’70s when Nat Young and Terry Fitzgerald were discovering the unknown realm of what was possible in terms of turns, power and speed. More modern surfers like Tom Curren and Kelly Slater have pushed and refined things in the shortboard realm.

And yet in longboarding, we hear the same refrain: “What those guys were doing yesterday in those finals…I was around in the ’60s and Corky Carroll, Dewey Weber, all those guys, they were doing the same thing then as you could see yesterday: nose rides, spinners, hanging ten, hanging five…they used to do it all then.”

Too much emphasis on nose riding has taken longboarding into a dead end.