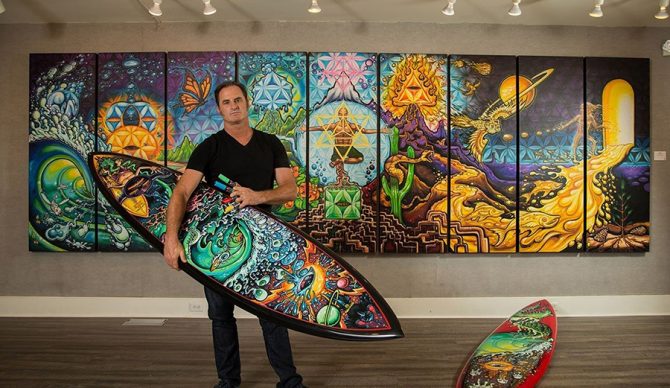 Drew Brophy has always walked to the rhythm of his own brush: the iconic San Clemente artist whose name was thrust into the surf spotlight in the 1990s when he began painting boards for Matt Biolos and the …Lost label, can definitely surf. But the South Carolina native preferred riding big waves. And he preferred catching them standing up.

“I just like how easy it is to see the sets as they roll in on a SUP,” he once told me in his soft, barely noticeable Southern drawl.

Brophy is a good man. I used to love walking into his art shop to say hello. It’s just a few doors down from Terry Senate’s place on Los Molinos, where my ding repairman works out back. Drew always had a trip idea or something going on with his family, a new art piece to show off, or a new board, painted in his bright funkadelic style. That’s why it was such a bummer to hear this week that Drew had been hospitalized with COVID and put on a ventilator.

Drew’s brother James recently wrote an update about Drew on a GoFundMe page set up to help with medical costs: In early November Drew began to feel sick. For 10 days he stayed home in and out of bed trying to recover. After increasingly difficult days he realized he was getting worse, and medical attention was needed. Drew was admitted to the hospital with COVID. Soon after he was moved to the ICU. After 13 days of fighting to get his body well, his lungs were not strong enough to help him recover. Drew decided with his doctors that a ventilator would be the next step to fully recover. Drew understood a ventilator was needed to help him rest and let his body heal.

Drew, 50, has stuffed his life full of adventure: he’s surfed Mav’s and Puerto Escondido, both traditionally and on a SUP, and paddled the Grand Canyon standing up, becoming one of the first to attempt the feat. The artist has been in the ICU for nearly a month now, which hasn’t been easy on his family (he has a wife and son), hence the GoFundMe campaign.  No word on whether Brophy is vaccinated. But does it really matter now? He’s just a good dude, having a rough go of it. And he probably sees the ocean the way most of us do.

“It was huge and empty, just me and the sea,” he once wrote about a clear January day surfing Ocean Beach. “Hands down  the best surf session I ever had on my paddleboard. I was at the perfect place at the perfect time. We watched the sunset while drinking beer from the sand dunes. Our bodies were buzzing from the day’s waves, totally stoked and exhausted.”

You can donate to Drew Brophy’s GoFundMe campaign here.