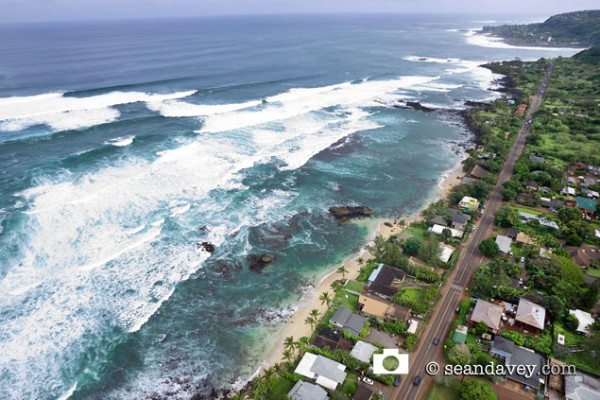 Alligators from above. Photo: Sean Davey.

Kirk Passmore, of San Diego, California, was one of many surfers in the lineup at Outside Alligators this morning, but he was the only one who didn’t come back in.

The powerful north swell produced perfect waves Wednesday morning and Passmore picked one out of a large set. In a Surfline report, pro surfer Ben Wilkinson said he took off too late and wiped out. Danilo Couto witnessed Passmore swimming down towards the bottom of the ocean, which led them to believe that the impact of the wipeout had burst his eardrum and he was severely disoriented.

Wilkinson also told Surfline, “I took off two waves later; I didn’t make it around the section and got mowed by six more waves–so [Kirk] must’ve taken at least eight waves on the head.”

Passmore’s board washed up at Chun’s reef, but his whereabouts remain a mystery. The Jet Skis in the lineup created a search team and formed a triangle, attempting to search for the missing surfer, but to no avail. North Shore lifeguards and fire department will search until dark – at which point they will stop. The search will resume at sunrise on Thursday when rescue squads will patrol from Haleiwa to Sunset in search of Kirk Passmore. If he is not found by then, the search will continue for a total of three days.

Given today’s events, this is an eerie time on the North Shore as Todd Chesser drowned at the same spot in 1997. The Inertia’s thoughts and prayers are with Kirk Passmore and the Passmore family.