Sandy: A Swell for the Books 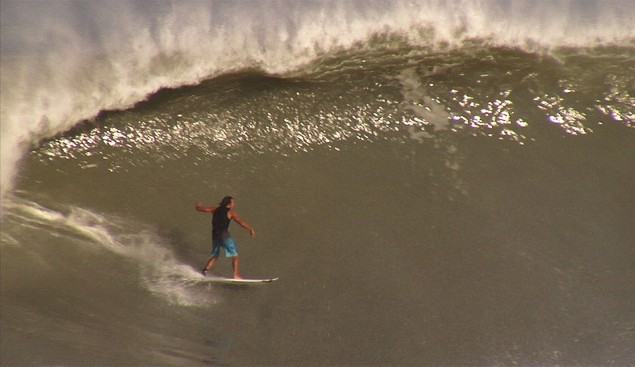 My thoughts on Sandy are a bit mixed. It’s kind of a guilty feeling, you know? I had so much fun surfing the swell. But after hearing about the lives lost and the devastation that has taken place, I would gladly give back every ride.

With that said, the waves Florida got during this swell were nothing short of amazing. After two epic days of surf in South Beach, I figured the swell would be dying. When I talked to Shea on Saturday afternoon, he told me he had talked to Kelly, and the rumor was that Sunday was going to be bigger. I wasn’t really buying into their theory. Having lived in Florida for so long, we don’t usually even get two days of big swell – much less three maxing days. So on Sunday when I woke up to Shea calling me to say the waves are epic, and I need to get my ass up there, I was a bit baffled.

Upon arriving to the beach I was in full panic mode to get out there. Wardo, Dixon, Chambers, Evan and Shea were all in the parking lot having already surfed – telling me how epic it was. They had me running down the street to get out there. I jumped straight of the jetty and started making my way out to the boats sitting in the channel. Lucky for me, one of the boys noticed me and came over on his ski. With the current so strong, paddling really was not an option. It was a ski day in Florida!

Having never surfed this wave I was curious and a little bit nervous as to how it would play out. The wave breaks fairly close to a jetty, and I had seen a few waves on video of CJ and Matt Kechele before, but that was all I had to go on. True to form, the wave played out just as I had imagined all these years since I saw that video. The wave was a beast, and I fell in love right away. I got towed for a while, getting a few nice tubes and maybe riding a few too deep that I should have made, but that was my fault. I then handed the rope off to Shea and climbed aboard a friend’s boat to watch the show from the channel.

The boat was not the place for me. I was losing it. I had to get back out there. Shea got a few nice ones and handed me back the rope; I was stoked. As soon as I got back out there a massive set came in. This time my wave came out of the channel a little too much and sent a right coming straight at me. That one broke my board and ended my day. I was now forced to enjoy the rest of the day from one of the many boats in the channel. The show was epic. Set after set continued to roll in, and we were all treated to one of the heaviest sessions to ever go down in Florida. This swell, no doubt, will go down in Florida history.

View more photos from Hurricane Sandy and read accounts from Raven Lundy, Evan Geiselman, Peter Mendia, and a gallery of possibly the biggest day ever surfed in Maryland by Nick Denny.

Visit the Red Cross in order to make a donation and help those affected by Hurricane Sandy.