It’s been more than a year since Rafael Howell, a British-Filipino kid from Siargao Island, set out as Saudi Arabia’s first surf grom. In a country with millions of kids, he’s the only one gliding along the occasional Persian Gulf wave.

While the Kingdom has changed for the better in many ways recently, security services have stepped up their activity along the shoreline. Ever suspicious of potential infiltration by Iranian elements, the increased patrols have turned Rafael’s surfing sessions into a cat and mouse game. Of course, they don’t think we’re infiltrators but the police simply don’t understand surfing. So they stop and tell him to get out of the sea whenever they find him chasing a few waves. In addition, the sandstorms which frequently arrive with the swell make it even harder to stay in the sea. However, none of these challenges have prevented Rafael from continuing the grom life in the most unlikely place on earth. 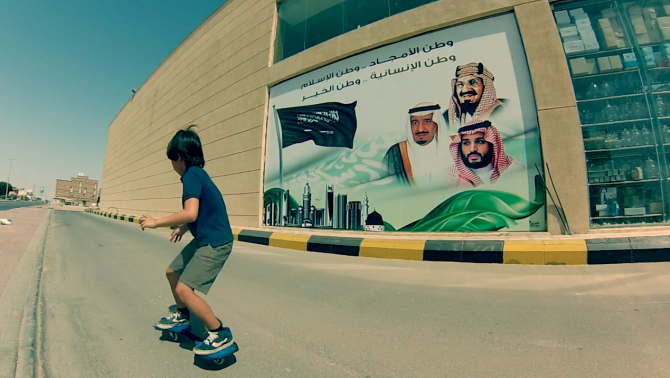 On land, he’s as keen as ever to ride his Ripstik. It keeps him sane through the months-long flat spells but it’s all part of the Persian Gulf surfing experience. Rafael may very well be a pioneer of both his Ripstick and surfing in his home country but he’s increasingly eager to return to his birthplace, Siargao, trading a desert sky for a tropical one. Soon, God willing, that wish will come true. Meanwhile, the pursuit continues for the one kid brave enough to ply the waves and concrete of Arabia.