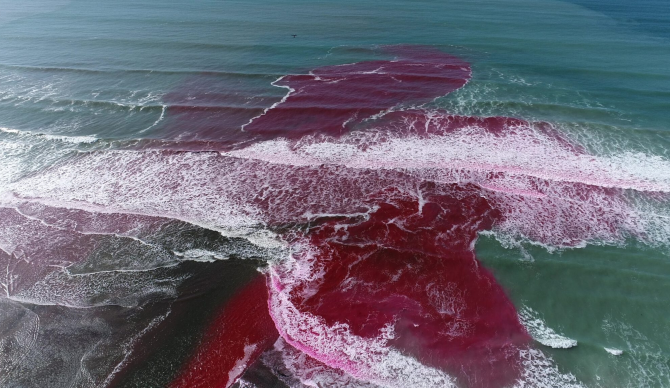 Patches of pink water were seen flowing out into the Pacific near Torrey Pines last week. But news reports quickly assured the public the colored water wasn’t polluted runoff, it was part of a three-day experiment conducted by researchers at UC San Diego’s  Scripps Institute of Oceanography and researchers from the University of Washington.

The project, titled Plumes in Nearshore Conditions (PiNC) has been studying how small outflows of freshwater interact with ocean water when it reaches the surf zone. Each dye release consists of 15 gallons of pink water that can be seen in the ocean with the naked eye for several hours and tracked with special equipment for up to 24 hours. From there, researchers monitor how the freshwater moves once they release it from freshwater reserves like Friday morning’s low tide release near the estuary mouth at the Los Peñasquitos Lagoon. They monitor the pink blobs using drones, surveying the area with jet skis, and poles in the sand of the river mouth with special sensors attached. Over the course of the research project, this will teach them how waves distribute and move sediment around smaller waterways.

Similar dye studies have been conducted in Southern California in the past and Scripps researchers pointed out while those experiments monitored the momentum of the water outflow, they didn’t consider how it was impacted by the buoyancy of the outlet.