Shane Dorian On ‘Momentum Generation’: ‘I Was a Little Bit Reluctant and Skeptical’ 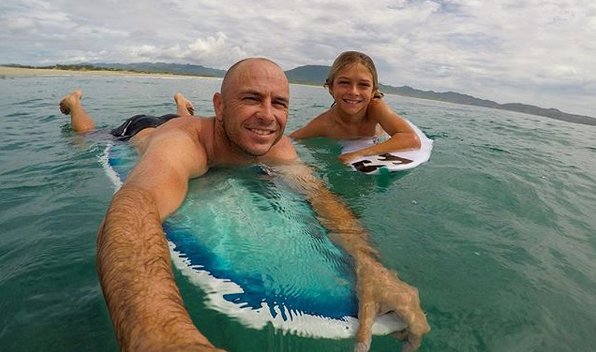 Shane, with son Jackson, who he wouldn’t mind seeing stay away from places like Jaws. Photo: Dorian

For the fourth consecutive day, weird, wonky conditions have forced the WSL to call off the Pipeline Masters. But that’s definitely opened up opportunity to enjoy solid conversations with surfing’s most iconic characters. And Shane Dorian certainly qualifies. Part of the Momentum Generation, Dorian is as gifted as they come in giant surf, defining the pursuit in his post-CT years. I spoke with Dorian about the new Zimbalist brothers-directed flick that comes out today on HBO, the craziness that was the Jaws Challenge and a few other interesting tidbits as the always-articulate rider of large waves dropped his usual wealth of knowledge.

Alright, what did you think of Momentum Generation?

I was pleasantly surprised. I wasn’t involved in the production as far as how it was made or the story. We just kind of said, ‘ok, let’s do this.’ It was a bit of a leap of faith. We didn’t know the Zimbalist brothers who directed it. You never know how those things are going to turn out. I was a little bit reluctant and skeptical. I thought it was going to be a really difficult story to tell. I didn’t know how I would tell it. There’s a lot of people involved. It didn’t seem like a Dog Town and Z Boys movie, where there were so many radical things happening in their lives and so there were really radical stories, which is always fun and kind of almost easier to tell. But we all turned out pretty well so I didn’t know how they were going to do it. I thought they had a really fresh take on it and I was baffled about how good it was. It was a lot better than I ever hoped it would be.

What did people close to you think?

I’ve talked to people that I really trust that would tell me the truth and it seems like people really enjoyed it. Most people think they know a lot about all of us as so much has been written about our generation so I think people assumed that they knew what to expect and were really surprised how the story was told. Kelly (Slater), I know he was pretty skeptical at the start as well and I think we’re all really happy our story got told in a way we’re all really happy with. It’s a story about a group of friends growing up and surfing is the backdrop. It could be a story about a bunch of mountain climbers or a bunch of kids, who, whatever they do. Surfing is what brought us together but it’s just a story about growing up.

The Momentum Generation documentary has been accepted at #TribecaFilmFestival I haven’t seen it yet but looking forward to it. Will be good to re-live some classic memories and stories from that era🤙🏾@momentumgeneration @taylorsteele

So the Jaws Challenge, things got pretty crazy. What were your thoughts?

I think the biggest thing, obviously, that was controversial was that they called it off for the day. If I was the contest director I would have continued running but that’s from my perspective. They were dealing with a lot. I know they weren’t happy with the way the water safety plan was being executed. There was a lot of pickups being missed and it was a lot more chaotic than what you hope. But any time you’re dealing with that heavy of conditions it’s always going to be really hard. But I thought it was a rad event and fun to watch and fun to be a part of. The towing stuff with Kai Lenny, that was really awesome to watch, incredible. It was just unfortunate, and this is going to sound really weird because it’s a big wave event and it’s supposed to be huge, but it got so next level that afternoon. But it still was rideable, it was still contestable and paddleable. But something bad could have easily happened. It’s so hard to do water safety when Jaws is that big.

So  the contest directors were kind of protecting you guys from yourselves?

What about the notion that the Big Wave World Tour should have a tow option when things max out?

I think that would be awesome. It’s about the fans and I think the fans would be stoked on that. In certain situations, it’s probably a good idea to have that as an option because a lot of big wave swells, they don’t last two days. It’s just a one-day thing. And if it’s way bigger than you think it’s going to be or if the conditions are wrong for paddling it’d be fun to shift into a tow contest. Although, that’s like having a surfing contest and a boogie boarding contest and saying you have to do both. Tow surfing and surfing are two completely different things. It’s like windsurfing and surfing. It’s so different. It’s a totally different set of skills.

You’re going to have guys that are the best paddlesurfers who are incredible technical paddlesurfers but they’re not near the best tow surfers. You get a guy who has a windsurfing background who can barely do a proper top turn and he’d be the best tow surfer in the world. A lot of the best tow surfers don’t have a real surfing background, more of a multi-sport background. Look at Laird—he’s so good at all kinds of different things but his approach is not how a surfer would approach the wave at all and that’s part of the reason he’s so damn good at tow surfing. Same with Kai (Lenny). He’s an insane surfer now, a really good surfer now. But his background is so different than a normal surfer’s. But his execution in tow surfing, that’s part of the reason he’s so good at it.

This wave was my one chance at a set wave at the peahi challenge so I had to try. The wind made it really tough. This wipeout sucked big time. Happy to be surfing with some of the best in the world out there, I saw some incredible rides and attempts in those couple of days. Happy no one got seriously injured and everyone came home in one piece. Thanks for the pics @piper_jeffroh2o 🤙🏾🤙🏾 @billabong @reef @vertra @monsterenergy @yeti @bigislandtoyota

Your son is getting so good, but would you ever want him out on a day like that?

No. People ask me that all the time and no, I wouldn’t. And I talk to him about it all the time. I mean, you can’t control your kids and they do whatever they want to do and maybe he’ll want to surf big waves and maybe he won’t. But that’s definitely not anything I want for him and think he should be doing or trying to check out when it’s small, nothing like that. My thing with kids is to let them show you what they’re interested in and support that. He likes surfing and skateboarding but no, Jaws, I don’t want my kid out there.

Any pics for Pipe?

What about next year? Will we see you on the Big Wave World Tour?

I don’t know, I don’t have any plans. We’ll see how I feel. I’m definitely at the point where I feel very little pressure that I put on myself, which is new. I usually put a lot of pressure on myself and I don’t really have pressure from any outside sources. I’ll do it if I want to and I feel healthy and psyched and am into it but I’m definitely getting to the point where I’m less interested. It’s fun to be a part of it. Fun to be out there on big days. But when I don’t want the really good ones I know it’s coming to an end.