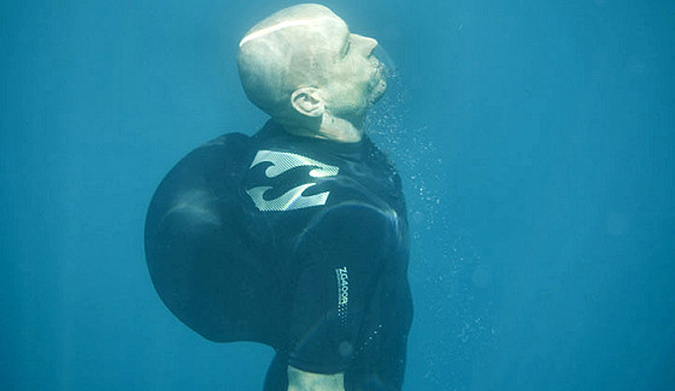 Peace of mind in a bag. Photo: Surfer Today

Moment: Shane Dorian took the most brutal wipeout of his life in an experience that changed the way he saw big wave safety and sparked the invention of the V1 inflatable wetsuit, which debuted six months after surfacing.

“I got pounded on a wave and, at the end of the wipeout, I was still pretty far underwater and I pulled it and it brought me up pretty quick…There were two more pretty solid waves right afterwards and the whitewater rolled over me and it popped me right up…On a really big wipeout, I haven’t been held under for longer than ten seconds yet.” -Shane Dorian

Nearly every big wave surfer, their families, and their friends gained peace of mind with the development of the V1 inflatable vest and Spare Air. Those surfers know the inherent risks of getting in the water, where the bigger the waves, the bigger the consequences. After losing nearly a handful of dear friends to drowning on days of massive swell, Shane Dorian suffered a serious wipeout himself at Mavericks. In an effort to make sure he didn’t join his friends, he phoned wetsuit designer Hub Hubbard and co-designed one of surfing’s greatest safety inventions: the Billabong V1 inflatable vest with Spare Air.

Watch and listen as Shane Dorian and Hub Hubbard talk about their creation below:

Given the popularity of paddling big waves, this is an excellent invention on many levels and could completely change the game and alleviate many of the associated safety concerns. As with any potentially life saving device, however, there are questions to be answered and detractors to be convinced. Dorian invented the V1 to keep himself and the big wave elite safe as they scour the globe in search of the biggest, heaviest waves they can stroke into. However, there are a number of said surfers who aren’t so keen on strapping a clunky vest to their back when added weight in such a dangerous arena could mean less air less quickly.

One such skeptic, Nic Lamb, is quoted in a piece for Surfline as saying, “It sounds like too much; I just want to go surf. Plus, with those things, you don’t feel any more confident. If I had a V1 and Spare Air, I wouldn’t be going any bigger at Mavericks. I just rely on my health, my training, and my skill.” Greg Long’s thought process is somewhat in line with Lamb’s and highlights a major concern for big wave surfers. “I will always be wearing flotation and a V1 wetsuit. I haven’t experimented with Spare Air yet and don’t think it’s something I will be implementing any time soon. From those who’ve used it, I hear you must exhale all your air prior to inhaling. This leaves a huge margin for error, if you ask me.” Given the priceless value of air during a wipeout in such conditions, some surfers are understandably reticent to even try Spare Air.

However, there are some who believe in taking every safety precaution possible, and they see Spare Air as a boon. Shawn Dollar is one such surfer as he told Surfline, “I wear a V1 suit and a Spare Air over the top of it. I’ll use the Spare Air first, and the V1 only if the Spare Air doesn’t work for some reason and I have to get to the surface immediately…I don’t know if I’ll paddle out to Mavericks anymore without a Spare Air and inflatable suit.” While there doesn’t seem to be a consensus among the world’s best big wave surfers, the overwhelming majority seem to endorse the use of the V1 technology. Spare Air, on the other hand, presents some interesting questions. If giving up two lungs’ supply of air to gain a new supply is in fact how it’s used, surfers’ hesitations could be well-founded. After all, when you’re 30 feet below the surface of enormous waves, taking chances means toying with death.

This is what a V1 pack looks like in action. Shane Dorian wore his during the 2014 Mavericks Invitational.

While Dorian has proven the effectiveness of his V1 creation for his purposes, the Spare Air has yet to be stripped of doubt. As with anything meant to protect lives, there will understandably be folks on both sides of the fence. Given the test runs Dorian has put it through, it’s clear that safety in big waves is in a far better place than it ever was. If strapping one on means living to surf again, hugging a significant other or being there for your children at the end of the day, these devices seem like a safe bet. 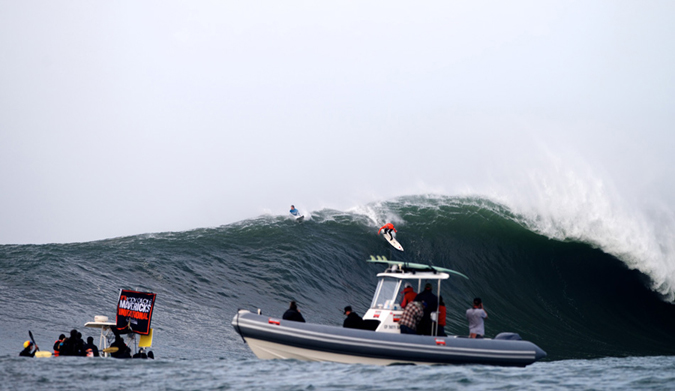 These are exactly the conditions Shane Dorian invented the vest for. Photo: Benjamin Ginsberg