Sharing the Stoke at the Vans US Open Surf Camp

Editor’s Note: This article is brought to you by our partners at Vans.

If you’re in Huntington Beach, Calf. for the US Open of Surfing, you’d be hard-pressed to disagree when I say that the stoke is high. The longboard tour surfers are currently in the water making the most of the walled conditions, the beach is packed despite the fact that it’s only Friday, and there’s a million young groms running around to collect as much swag as they can before the day ends.

But despite all the fun down at the main event, there’s no doubt that the stoke is highest a hundred yards down the beach at the Vans Surf Camp. The Surf Camp has run during the past two days, using the resources, including pros available at the US Open of Surfing, to bring underserved youths from local communities to the beach and get them out in the surf – for many kids it’s their first time doing so. 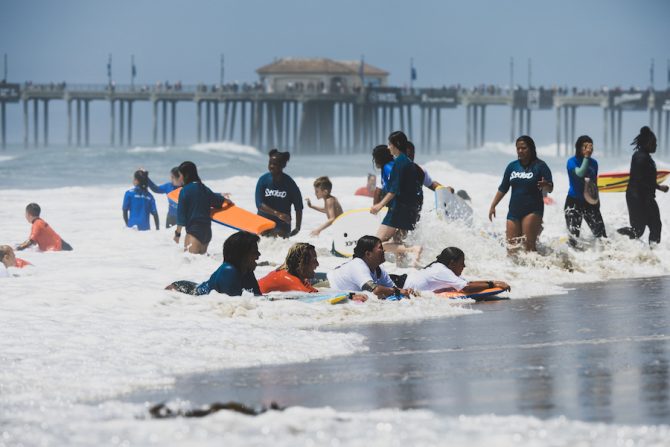 Boogie boards are the tool of choice for introducing campers to the surf in shore break conditions. Photo: Jimmy Wilson.

“This is the first year of Van Doren Surf Camp, said Pat Gudauskas. “We’ve done a ton of stuff with City Surf Project in the past through Positive Vibe Warriors, but this is the first time we’ve met the people at Stoked and Native Like Water. I think the coolest part of these projects is bringing communities together… it’s really special to see kids together sharing waves from all different backgrounds. It’s a totally different feeling than just the competition.” 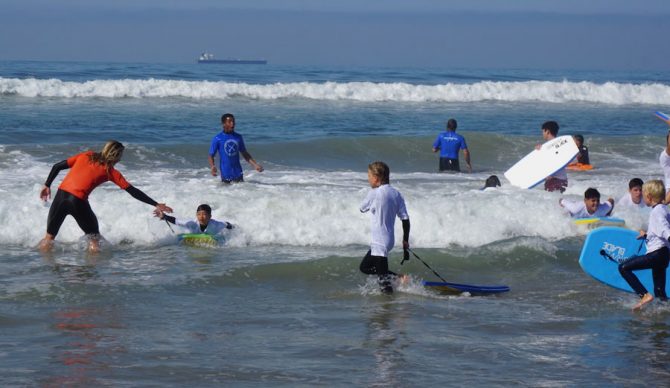 City Surf Project is down from its San Francisco headquarters, bringing some of its best surf instructors to Huntington to spread the stoke. The instructors, known as SILTs (Surf Instructor Leadership Training), are often former CSP students themselves. They go through 60 hours of training before taking students into the water, which helps develop their own leadership skills, and ensures a positive experience for the next generation of City Surf students. 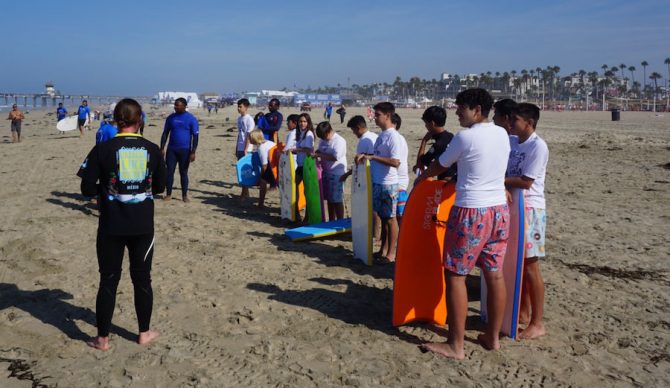 Instructors from City Surf Project and Native Like Water share some safety tips before hitting the water. Photo: WS

Native Like Water, out La Jolla, Calif., is working to re-establish the costal access local tribes used to enjoy before they were pushed inland, away from the coasts they had lived on for centuries. “It’s so empowering for students to be able to return to the coastlines that have been a part of our people’s history,” says Manny Lieras, who is working to expand the program into Northern California. “In San Diego, a lot of our youth participants are Kumeyaay. So it’s incredible for them to be able to surf in a culturally significant site [La Jolla] where some of their oldest villages are and their ancestors are buried.” 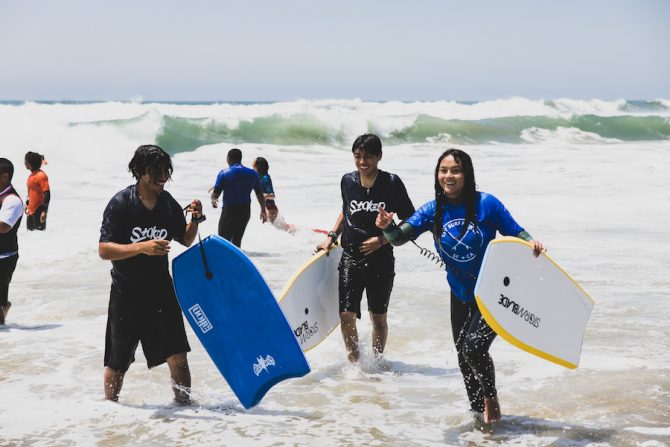 Stoke is most definitely high for the kids. Photo: Jimmy Wilson

Last but not least is Stoked, an organization focusing on empowering underserved youth in Los Angeles, Chicago, and New York to reach their fullest potential. They use a combination of mentorship and the inspirational power of action sports to propel their students to successful futures. These organizations all work year-round to put on events for participants, but there’s something special about the access to pro surfers and resources available at the US Open. Thursday saw Holly Wawn, Kyuss King, Puamakamae DeSoto, and Grant Noble, as well as Pat and Dane Gudauskas, show up to surf with the kids. 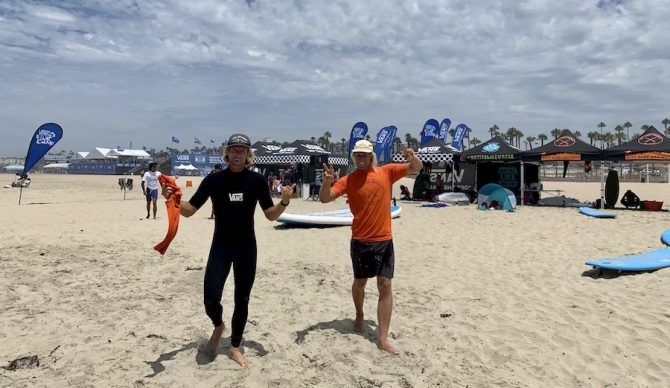 “We’re basically here to get the kids stoked,” said Holly Wawn. If that’s the goal, there’s no better crew to do so than the Gudauskas brothers. Towering over the sea of campers, Dane is the quintessential gentle giant. He’s always smiling, but he couldn’t have a bigger grin on his face than when he’s stoking out a crew of local groms.

“There were some double ups, so I taught a couple kids what a barrel was like,” said Dane. “They were amped, and we got a couple sick ones! It was all bodysurf at that point, but I figured that was a good way to introduce the greenroom to the crew.” Pat, of course, also had wisdom to share: “For me it’s a bringing together of cultures, so kids can get exposed to the US Open and competitive surfing but then you come down the beach and experience that inclusive energy in the surf zone,” he said. 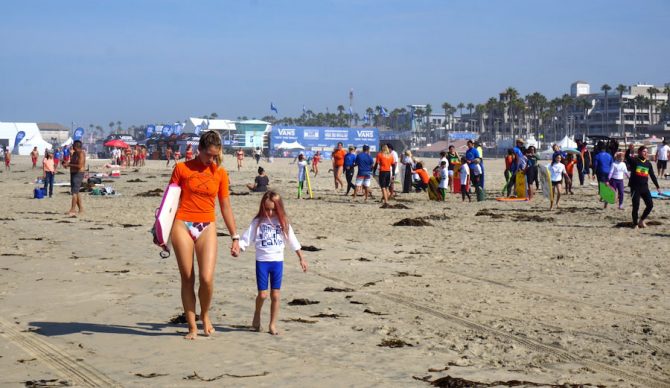 Puamakamae DeSoto walks a camper down the beach for her very first surf session. Photo: WS.

To DeSoto, who was there for both the morning and the afternoon session, working with the kids has a deeper meaning. “As a native Hawaiian my cultural practice is surfing, so it’s very special to be able to share that with everyone here. To see all the kids just having the most fun and with such big smiles on their faces is honestly the best.”