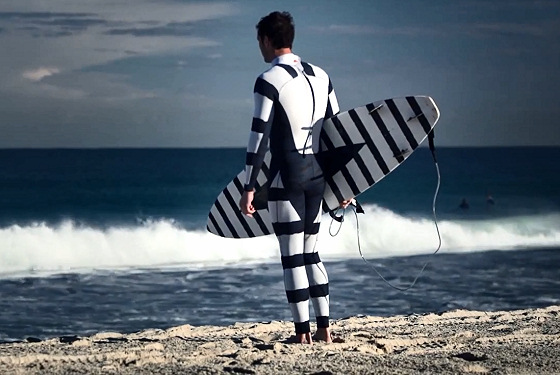 Now you can feel safer from shark attacks and look cool. Or look like a zebra. Zebras are hip, right?

As surfers, there are risks to what we do. Not all of us surf massive waves or shallow reef breaks, but one thing that every surfer might fear is sharks. From Tiger sharks in one-foot Florida mush to Great White at massive Maverick’s and just about everywhere in between, they can get us. And I can only really speak for myself, but I feel it’s pretty safe to say that, for most surfers, the number one fear is getting attacked by a shark. Or at least it’s pretty high on the list.

With that being said, we humans are a very resourceful bunch, constantly finding ways to fix the pesky little problems we face daily. And I’ll be damned if we don’t have some pretty good success with our solutions. Today marks the day we may not have to worry about those giant rows of infinite teeth any longer.

A Western Australia-based company called Shark Mitigation Systems has come up with two newly designed wetsuits that apparently have the ability to deter sharks. One suit is designed with divers in mind, using a “cryptic” premise that helps blend the diver into his background thus hiding him/her from sharks. The other is designed with us surfers (and swimmers) in mind, sporting a pattern of bold shapes and colors to present a “warning” or “threatening” appearance to a shark.

The wetsuits are the result of a $20,000 grant from the State Government for inventors Craig Anderson (not the Quiksilver, Slow Dance icon) and Hamish Jolly to work with the University of Western Australia to, in their words, “put the science to the anecdotes” and come up with a proven solution. Anderson and Hamish had great help in the form of Professors Shaun Collin and Nathan Hart, from UWA’s Ocean Institute and were able patent their suit under the aforementioned company name.

Now I know what you’re thinking: “Yay! Hoorah! Whoopee! I never have to worry about sharks ever again!”

But unfortunately, they cannot absolutely guarantee your safety from shark attacks (shocker!). This past January tests with a Tiger Shark off the North WA coast showed that the sharks preferred the standard black wetsuit to the “cryptic” design of the researchers. “We have had a handful of engagements like that. We need to do more. All the early evidence is that it’s working,” stated Jolly. But just because the “early evidence” doesn’t mean that you can go all Mark Healy  on Jaws and not worry about a thing.

However, this is (in this writer’s opinion) a positive step forward in keeping surfers safe, and whether it works 100% of the time or not, we have definitely seen pro surfers wear weirder colored wetsuits than these. So it sure doesn’t seem like a bad idea to make your next wetsuit shark repellent as well as “hip.”

At the very least, enough surfers might crowd around you in the line up to get a peek at your new threads, and that’s got to reduce the odds that you get attacked.