The Light Shines Ahead 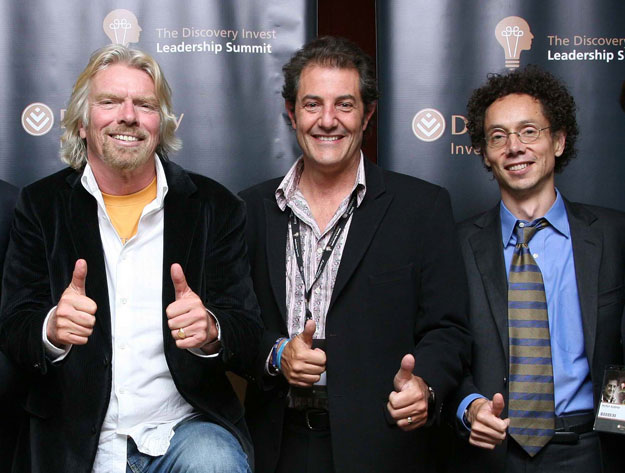 "I’d like us all to consider the simple question," says Tomson. "What is your attitude?" Tomson pictured here with Sir Richard Branson and Malcolm Gladwell at an event where each delivered keynote speeches.

In 2006 life was good for the Tomsons

My wife and I had sold our apparel company Solitude that we started in 1998 to Oxford, a publicly traded company on the NYSE. They had set up a new design studio for us in Montecito and put us on a 3-year contract.

At the time Mathew was having some challenges at school and we decided to have Mathew reconnect with our homeland and attend my old School for a few months. Carla and Mathew made the long trip together and within a month he was doing great, excelling at my old school – I was so proud of him.

Hey, Dada, I want to read you something.

He then read me a beautiful essay.

I asked him who wrote it.

He captured the essence of the surfing experience along with a depth of spirituality. Four words really stuck with me: The light shines ahead

Carla jumped on the line and we had to start the call. I love you Dada, I love you too, Mathew.

A Japanese film crew came and picked me up – they had flown out to interview me and wanted some pictures. Of course, I took them down to Hammonds.

I looked out to the ocean and something just didn’t feel right – it is too perfect, I thought.

Walking back on the path I had a profound feeling of unease.  Something felt very, very wrong. I stopped under a large Eucalyptus tree that lines the trail and the interviewer stopped with me.

“There is nothing more important than a positive attitude,” I said to him. The words just popped into my head. Those words formed a core belief, but the words sounded loud and forced to me.

He was playing a risky game that had deadly consequences.

Our lives were shattered in a moment. My friends rallied, got me a passport and ticket and put me on a plane. It was a harrowing trip back to South Africa – I was in a state of disbelief and my only thought was to save my wife. My beautiful son was gone and I knew I was close to losing my wife as well. On my arrival, Carla had to be admitted to a psych care ward and I didn’t think she was going to make it.