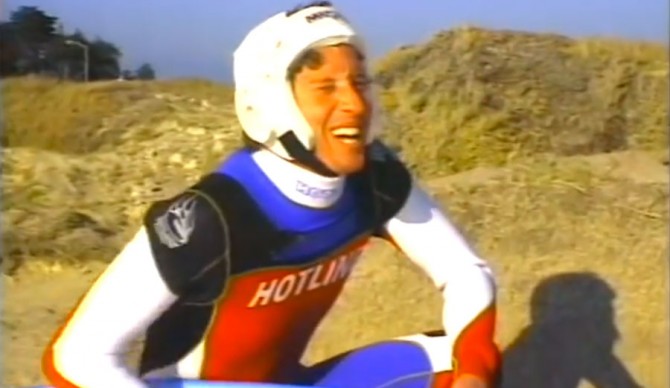 Shawn “Barney” Barron – singular in style. You will be missed.

Shawn “Barney” Barron, iconic Santa Cruz surfer, died today. He was 44 years old. The Maverick’s pioneer was one of the famed Santa Cruz Westsiders who grabbed the world’s attention with his aerial surfing, super hero wetsuits, and attention-grabbing antics in and out of the water.

Early reports hadn’t confirmed the exact cause of death at his home in Santa Cruz, but the tragic news spread quickly to Barron’s friends and the surfing community.

Longtime friend and WSL correspondent Peter Mel said in a statement on social media, “He was an innovator. In his surfing, his art, and his personality. There’s nobody I could compare him to.”

RIP Barney. You were one of the kindest, most genuine people I’ve ever met. You always had a smile on your face and the hospitality and friendship you showed me was amazing. I learned so much from you and you truly are leaving us too early. Your surfing was so original and innovative. The sport of surfing owes you so much. @ozzywrong and I were just reminiscing on the times we all had spent with you and how to live with such a big heart and not to take things so serious. From your barrel rolls, to flips, to art and amazing wetsuits I don’t think anyone will fully grasp the influence you had in people. You already were a legend to me and I know that your spirit will live on forever in the people you touched. Love you Barney.

Barney was singular in his style and spirit, and he will sorely be missed. Feel free to leave remembrances below. We will keep you posted as more information becomes available.