Meet Shino Matsuda, the 17-Year-Old Who Will (Likely) Surf for Japan in the Olympics 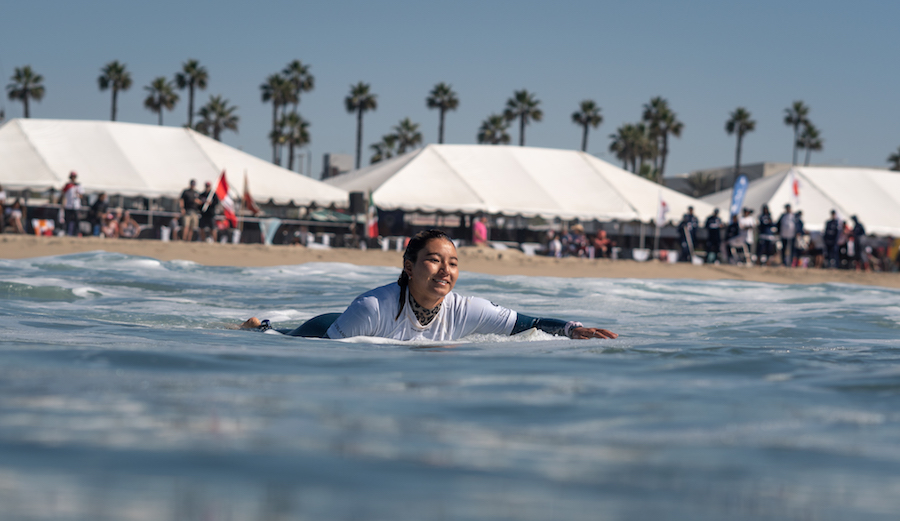 17-year-old Shino Matsuda provisionally qualified for the Olympics at the ISA World Surfing Games earlier this year. Next summer she’ll be representing the host nation as millions tune in to surfing’s Olympic debut. Photo: Sean Evans

It’s nearly mid-day in Huntington Beach and a pleasantly warm morning has yet to give way to the afternoon south wind Surf City is known for. I dutifully trudge through the sand to the scaffolding marking the presence of the VISSLA ISA World Juniors. The contest is actually being run with overlapping heats at two different peaks – one north and one south – the commentary of one competing with the other to create an air of hustle and efficiency.

Between the two judges’ towers, pointed squarely at the north and south peaks, sits a sprawling, low-lying tent that’s a badlands for competitors. Junior national teams that don’t have a dog in the ongoing heats sit in matching track-jacket-like uniforms with their country’s name on them either listening to music, scrolling through Instagram, or chatting with other competitors. Diminutive surfboards are lined up near the back of the tent as far as the eye can see and wetsuits are slung over a railing to dry in the sun.

I touch base with the ISA’s media point person who quickly chats with team Japan’s coach about organizing a quick interview with one of the nation’s rising surf stars, Shino Matsuda.

At just 17, Matsuda provisionally qualified for the 2020 Olympics back in September at the ISA World Surfing Games in Japan. Whether she’ll be the only female to represent her country and the host nation during surfing’s Olympic debut remains to be seen, but what is certain is if Kanoa Igarashi’s wave of endorsements is any indication, Japan is throwing big support behind its Olympic athletes. Not least of which its surfers.

When I caught up with Matsuda, who comes from the Tokyo suburb of Chigasaki in Kanagawa prefecture, she was quiet, reserved even – perhaps due to the interview being conducted through her coach playing translator or being new to fielding questions from media. Still, she was clear. She’s thrilled to represent her country and serve as an example of what’s possible to young Japanese girls who chase their dreams. Here are some of the more salient bits from our conversation: 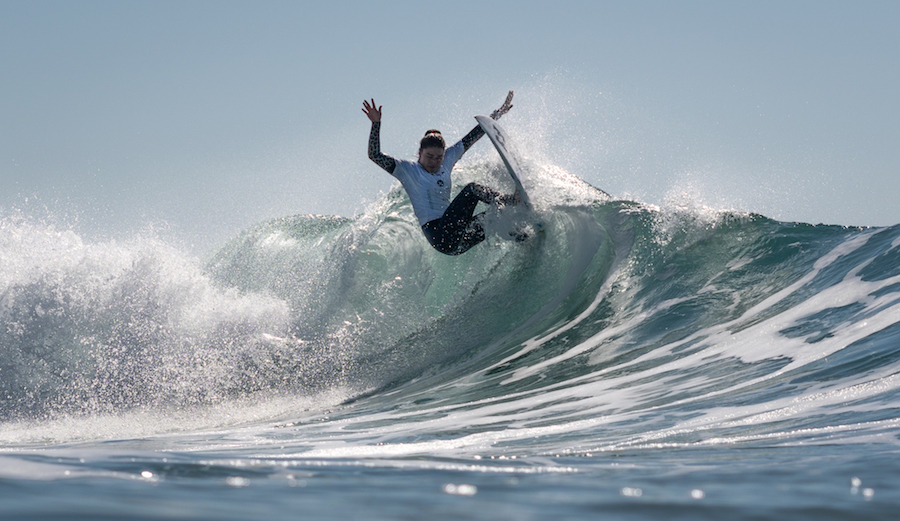 When did you start surfing?

The first time I surfed was under the influence of my parents. They were bodyboarding and longboarding. At six years old was the first time I caught a wave and rode it to shore.

When did you first start competing and what drew you to competitive surfing?

I started competing in amateur surf contests at about ten years old. Every time I competed there were people who were at a higher level and I would get really inspired by them. And when I’d win events, of course, I loved that feeling and that’s what pulled me in more and more.

It may seem like a big dream, but my dream to surf in the Olympics is getting closer to becoming a reality.

Obviously, Japan will host the Olympics next year. How did it feel to provisionally qualify and potentially represent Japan on such a large stage?

I’m really thrilled to represent Japan, for sure. The closer we get to the Olympics, the more concentrated on the event I become. Definitely that this will be the first time surfing will be in the Olympics and that it will be in Japan is incredibly exciting.

How will you feel to be competing on your home turf in front of friends and family?

Yeah, I’m very excited to compete in Japan. And that my friends and family live very close to the competition site so they can come and see me. I’m really really excited.

Definitely the world is beginning to recognize Japan as a top surf country, and that’s really motivating. As you said, Kanoa is on the CT representing Japan, and that motivates me personally to set a goal of qualifying for the CT. I feel very soon more Japanese surfers will break into the CT and will continue to push each other competitively.

For me, my dream when I first started surfing was to qualify for the CT and it still is. But, I also really want to get a medal at the Olympics.

What do you want to say to young fans of yours who will undoubtedly be watching you compete next summer at the Olympics?

I would like to say that it may seem like a big dream, but my dream to surf in the Olympics is getting closer to becoming a reality. And that motivates me through those hard times. Having that goal helps me overcome those hurdles. I would tell the next generation to make big goals that push you.