She’s six. SIX! While a six-year-old with the present ability and future potential to make you look like a downright fool is generally reason to get a lil’ anxious with heavy feelings of inadequacy, we’re in awe and damn excited to see what she does over the course of her surfing career, professional or otherwise.

According to ABC Open,the fearless Quincy Symonds started surfing when she asked her mother where her father was and was told he was out surfing. A stubborn kid, she waited at the house door for 45 minutes until her father returned. Upon his arrival, she implored him to let her go surfing with him. A couple years later, the Flying Squirrel (she once mimicked a flying squirrel by jumping off her dad’s “ute” or utility vehicle and was so convincing the nickname stuck) is widely considered among the best six-year-old surfer-skaters in the world, if not the best.

Gotta love her control of that top-turn she’s leaning into. Imagine what’ll come of that once she has more weight and muscle to throw into it. Born with complications that had her in intensive care units and still has her steroid-dependent, but now shredding — and there’s no denying that she is shredding — on the daily with pops. And it is clear that dad is PUMPED on his girl paddling out with him. These #AlohaFriday vibes have us smiling ear-to-ear. 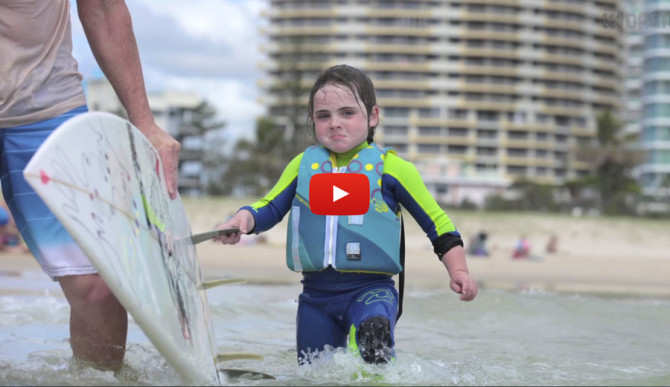