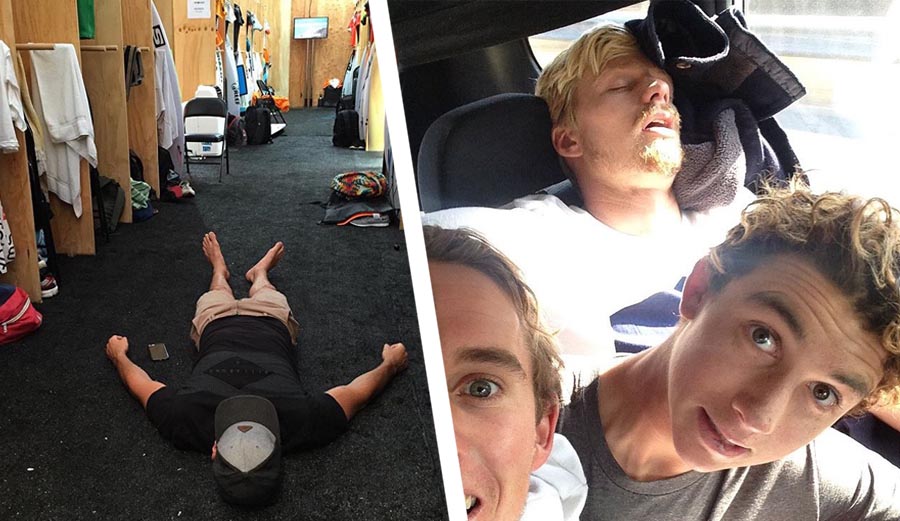 From the athletes to the equipment brands to the World Surf League itself, the global surf community’s shining stars have maximized the sport’s social media presence. The official WSL Instagram account boasts 1.4 million followers, and a growing number of those devotees have discovered an underground WSL where the laws of pranks reign supreme.

The comedic World Sleep League account on Instagram is sure to explode beyond its 31,000 current followers as more people tag their friends with comments like, “this is legit my favorite account on Instagram.” In the spirit of the age-old party rule “Don’t Fall Asleep With Your Shoes On,” the World Sleep League is simply pros catching each other snoozing whenever, wherever, and however, sending waves of laughter across the globe as fans are welcomed behind the curtain of the Championship Tour.

Just as the upcoming Surfer Poll Awards that have marked 45 years of professional surfing, we’re happy to introduce the Sleeper Poll Awards, honoring the league’s brightest pranksters and deepest sleepers. Let’s have a look at this year’s honorees: 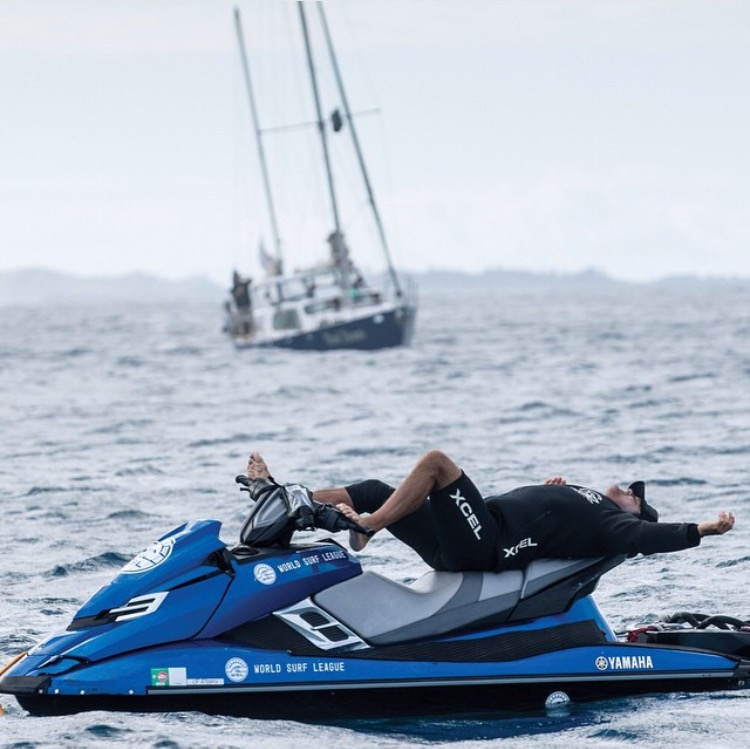 Keep your pillows and blankets and this “bed” thing you speak of. The Hawaiian legend known as Kaiborg was caught sleeping by the World Sleep League three times in Tavarua, but the two — yes, two — shots of him passed out while precariously balancing on a floating jet ski have made him the undisputed champion of snoozing where others would never dare. 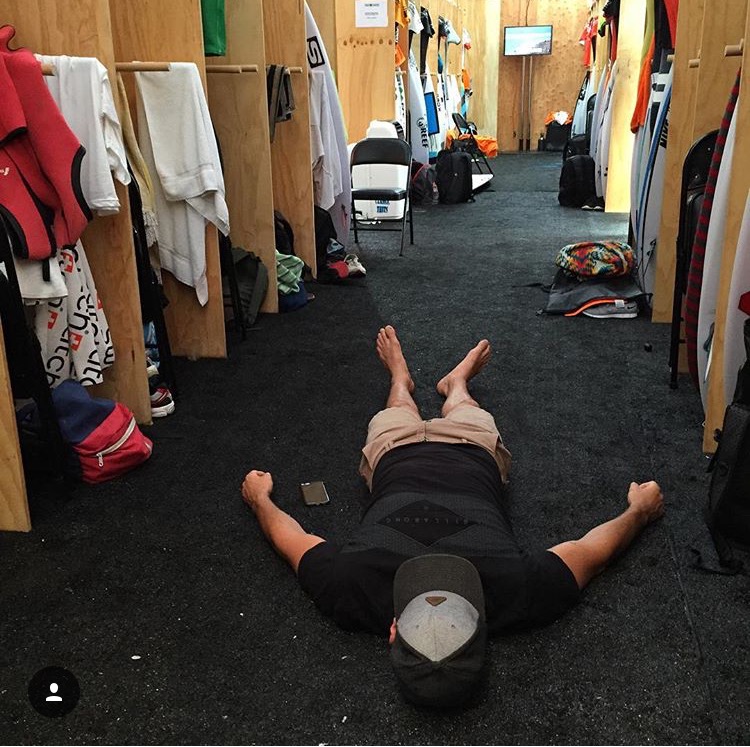 The World Sleep League caught plenty of pros asleep on a massage bed that became the defacto sleeping spot of the Trestles locker room, but Parko decided to skip the frills and practice his lay-back form directly on unforgiving floor like a man. 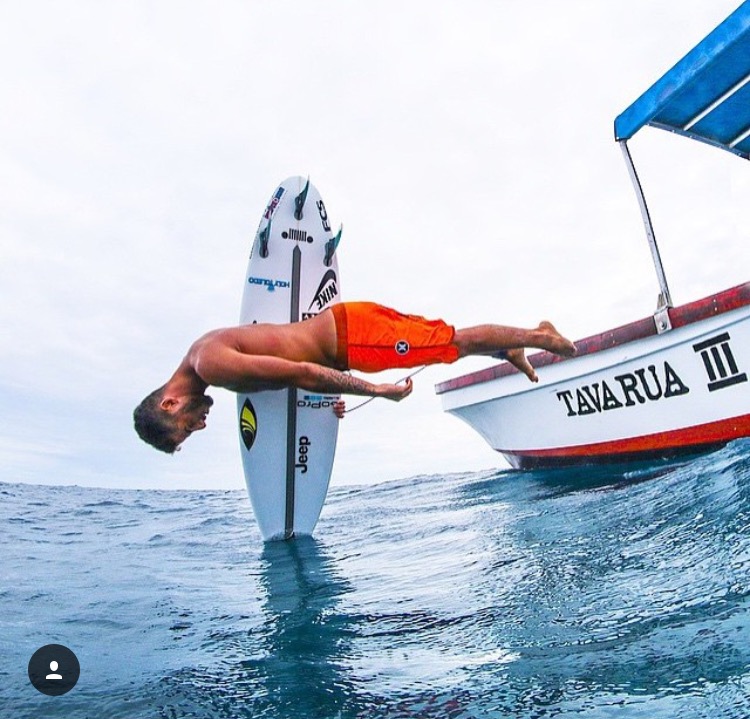 Was someone spiking the water in Tavarua with Ambien? The numerous lay days allowed the World Sleep League to catch everyone from team coaches to photographers knocked out in Fiji, but one of the most memorable shots was Toledo hovering parallel over the clear blue water, his sleepy head nodding forward and his eyes peacefully shut as he and his board came in for a splash landing off the edge of a boat. Honorable mention only because his gracefully pointed toes lead me to believe he’s not actually asleep (but, like Filipe, we can always dream).

Winner: The Hawaiians, Fiji and France 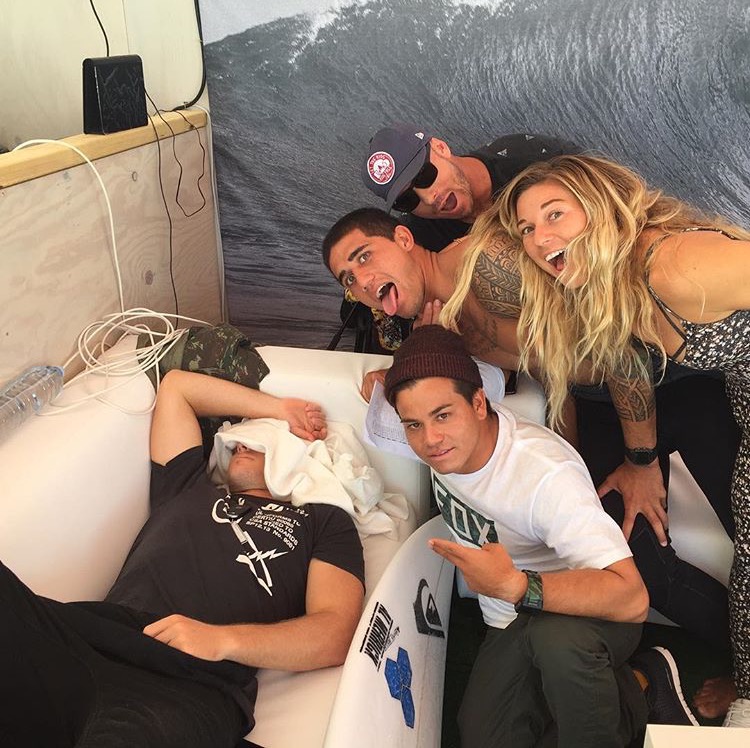 Surfing was born in Hawaii, and based on World Sleep League achievement I’m beginning to think punking people in their sleep was as well. The islands’ finest surfers proved a force to be reckoned with when Dusty Payne, Freddy Patacchia, and Keanu Asing caught Kaiborg flexing in his sleep at Cloudbreak. Then they proved that not even their fellow countrymen are safe when Asing led Coco Ho, Ezekiel Lau, and Volcom team manager Matt Bemrose to capture Dusty trying to catch some shut-eye in France. 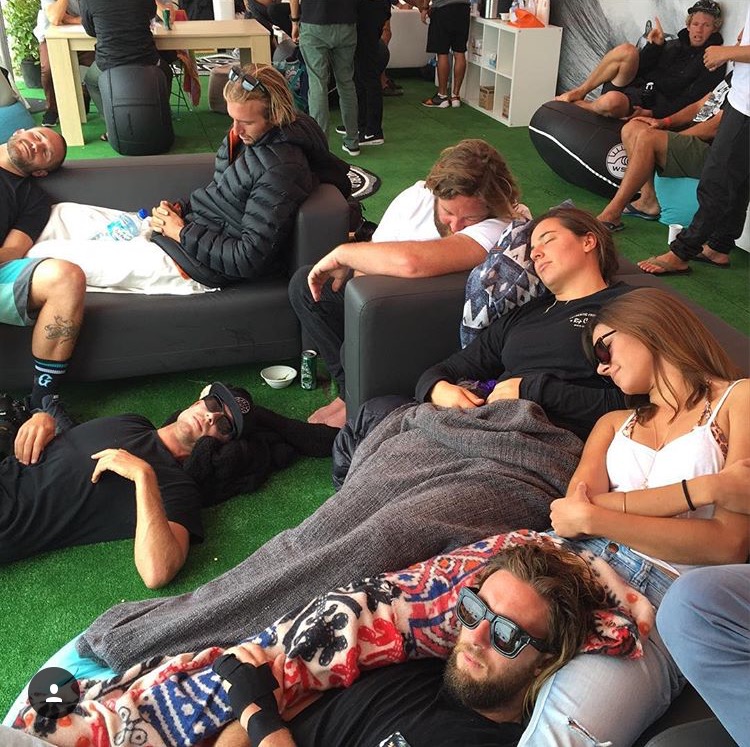 Synchronized sleeping may be the future of the World Sleep League after Team Rip Curl introduced a game of sleeping-or-not in Hossegor. Photog Corey Wilson and team manager Fletch joined Mick Fanning, Owen Wright, Tyler Wright and Matt Wilkinson in a cuddle puddle that spanned multiple couches and floor space while inviting followers to guess who was actually asleep. My guess (unconfirmed by the team) is that the Wright siblings were having themselves a nice snooze when their teammates decided to have a bit of fun. Unless Scorey actually does smile in his sleep as a side effect of photographing bikini models on the world’s most beautiful beaches for a living. 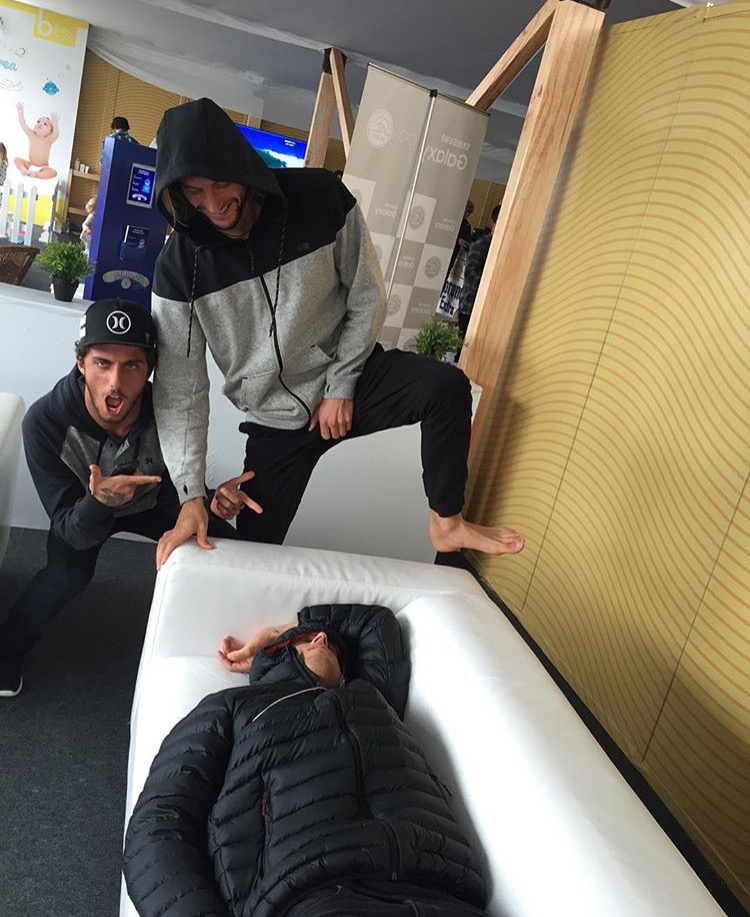 Mick Fanning is one of the more rare catches on the World Sleep League tour, and it’s often been fellow Aussie Owen Wright who gets him. In Portugal, Wright was joined by Filipe Toledo in an ultimate party shot that probably left frat boys with something to aspire to while also sparking the most commentary about tea-bagging I’ve seen on social media in quite some time (which has since been deleted and exists now only in our filthy minds).

The Host with the Most Zzz’s 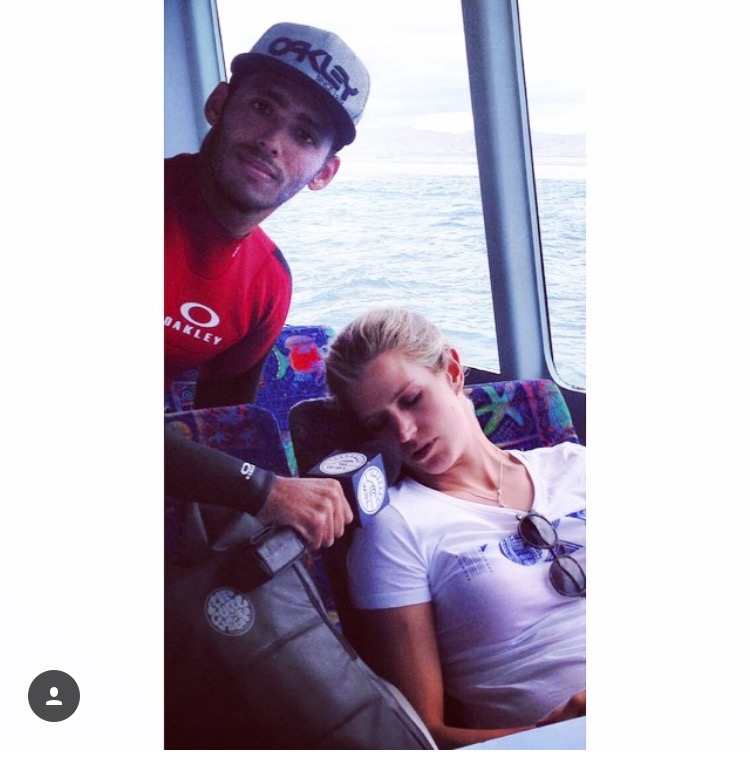 Anyone who has ever had to take a long chartered bus trip with classmates, friends, or colleagues is afraid to fall asleep. Pro surfer turned beloved announcer Rosy Hodge threw caution to the wind on a bus in Fiji, and Jadson Andre decided to seize the opportunity to turn the tables and get the interview of a lifetime for Rosy’s first and only appearance on the World Sleep League. 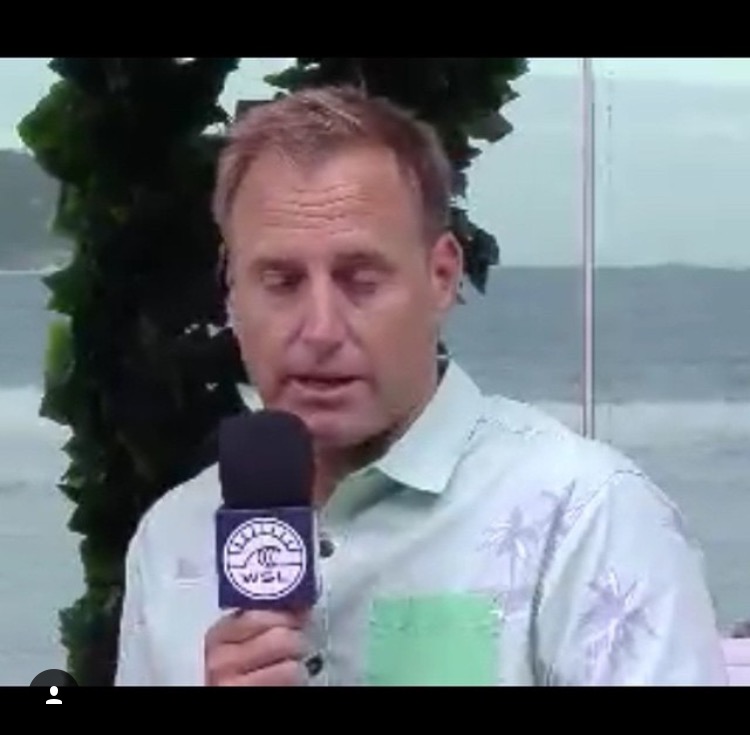 Because success isn’t always planned. Maybe it was jet lag, or the constant mornings being up and ready to analyze on Dawn Patrol, but the World Sleep League went to another level by using WSL footage to capture the perfect screen grab of Williams reporting in his sleep. That’s how good they are: you don’t even have to be asleep and they’ll get you. 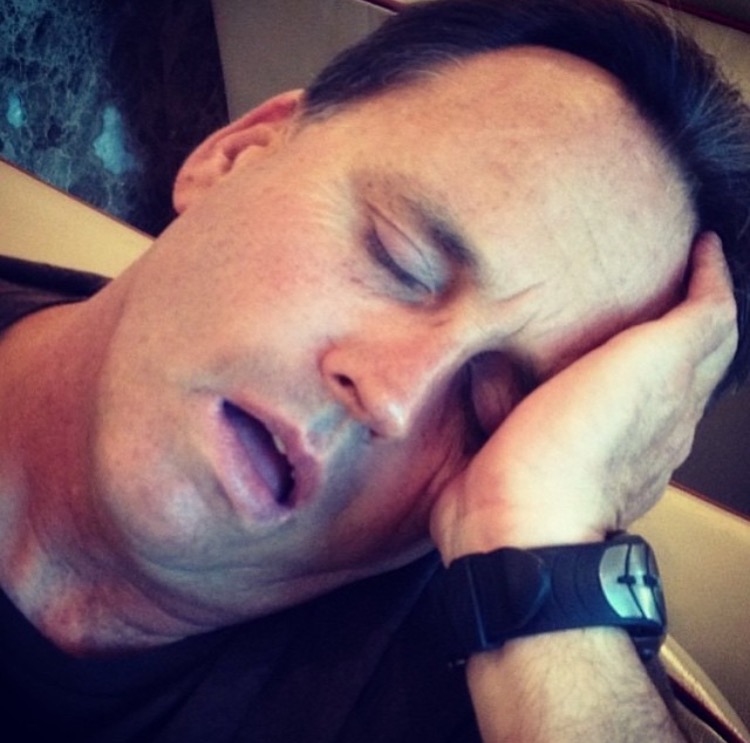 Honorable mention only because the head judge isn’t a formal announcer, because this capture is the stuff sleep pranksters dream of (while sleeping with one eye open). The uncomfortable sleeping spot, the hand pillow, and the open mouth make this World Sleep League entry a perfect 10 in our book.

Catch of Most Days 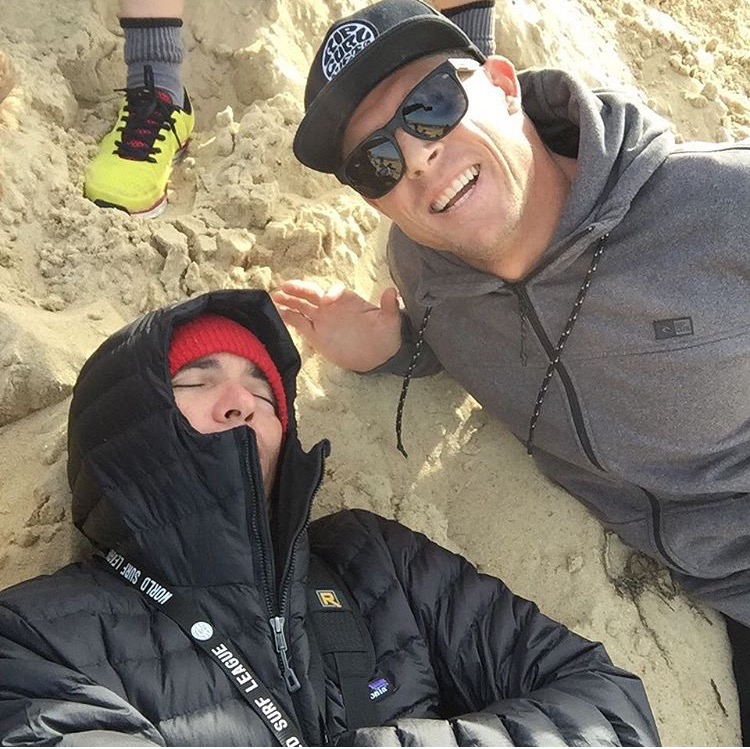 All around the world, Red Bull photographer Ryan Miller, aka Bad Boy Ry Ry, has been getting caught sleeping like it’s his second job (and since the snap of Laura Enever threatening him with a butt poke was a #tbt, we can say this is a win he’s been working on for a while). In the sand, on the couches, trying to hide snuggled up in his coat, Bad Boy can’t escape the World Sleep League’s prying eyes. To his credit, he did get a catch of his own on Malia Manuel at Lowers…only to be caught snoozing on the exact same couch by Filipe Toledo shortly thereafter. 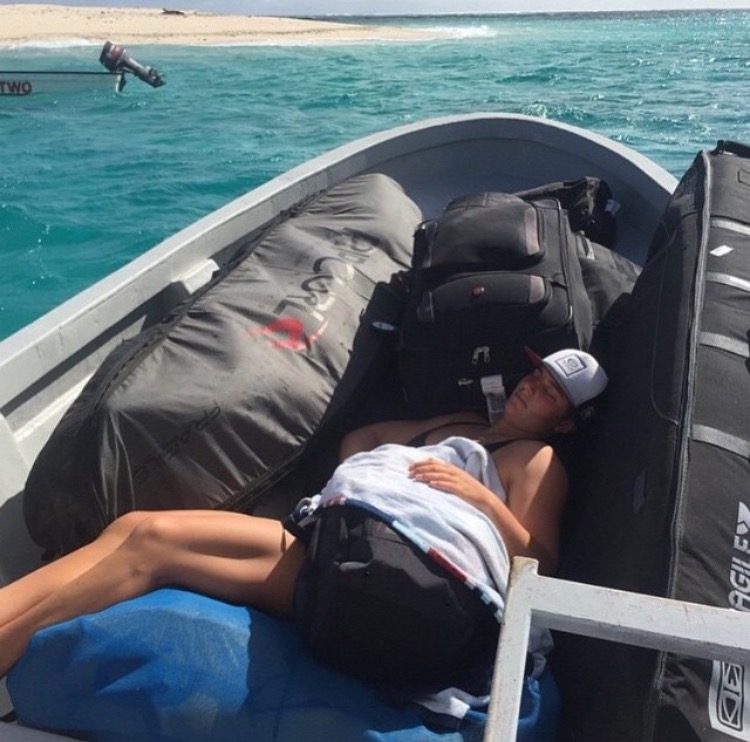 The men certainly outnumber the women in World Sleep League participation, but the girls are coming on strong, including Pauline Ado catching Nikki van Dijk in Cascais for an all-women’s match up. Tyler Wright has led the pack in both catching and being caught, but with her shut-eye shots on a couch in Brazil, in a boat in Fiji, and as part of the Rip Curl team sleep in France, Tyler is our runner-up Catch of Most Days. 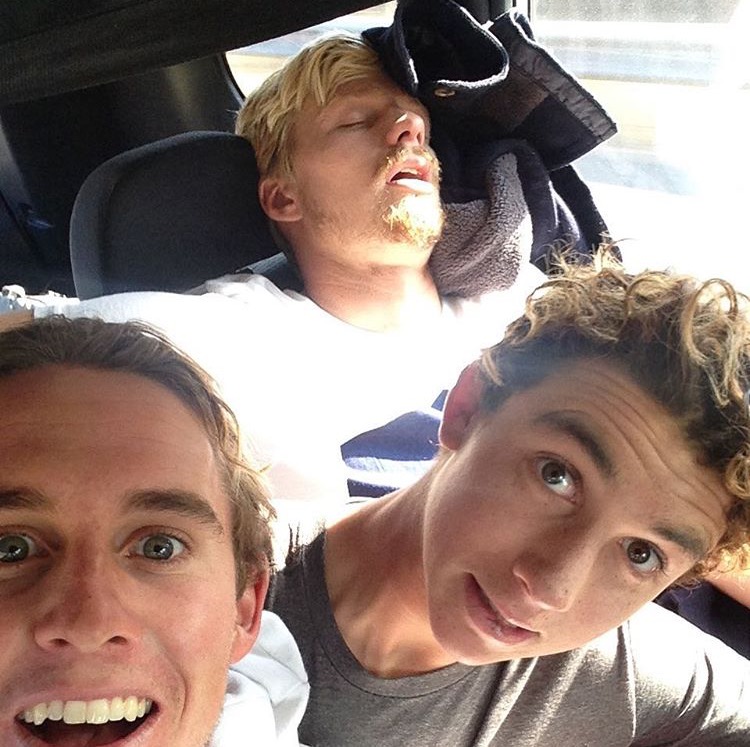 Brother has been a force to be reckoned with in the World Sleep League, mercilessly catching sleepers across all oceans. Despite catching way more than he’s been caught, his cherubic sleeping face at Trestles, his far less angelic sleep face on the road to J Bay, and his baby-faced #tbt sleep shot from 2010 have earned him an Honorable Mention on our list. 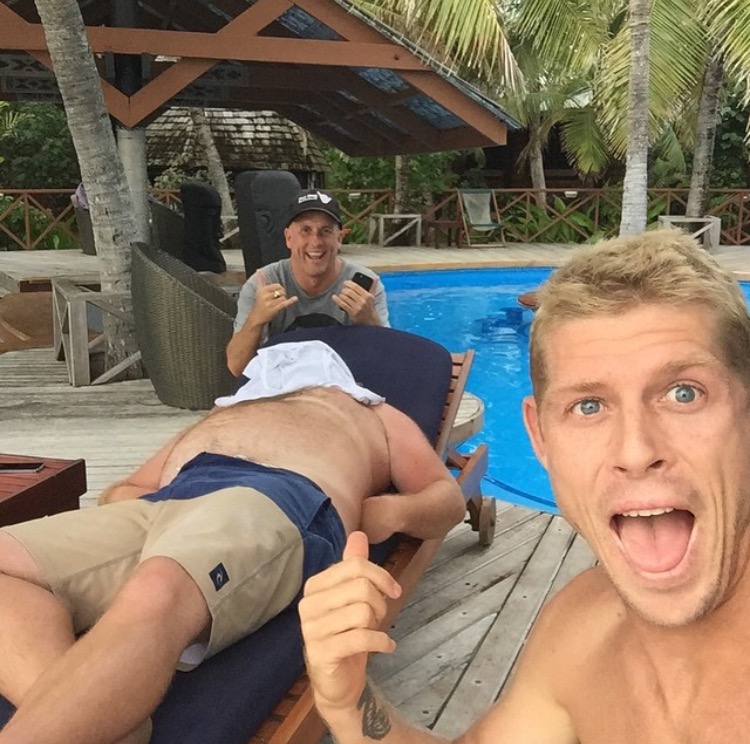 The three-time world champ barely edged out Keanu Asing for this win, but he seized victory thanks to yet another #tbt of a head-to-head sleep match between Mick notorious Dream Catcher Jadson Andre. Coupled with the sheer joy on his face when he catches his compadres in dreamland, the “Is he still with us?” scene of taking the pulse of a passed out Owen Wright, and the fact that he’s only be caught asleep twice, it’s no wonder why White Lightning is the face of the World Sleep League. 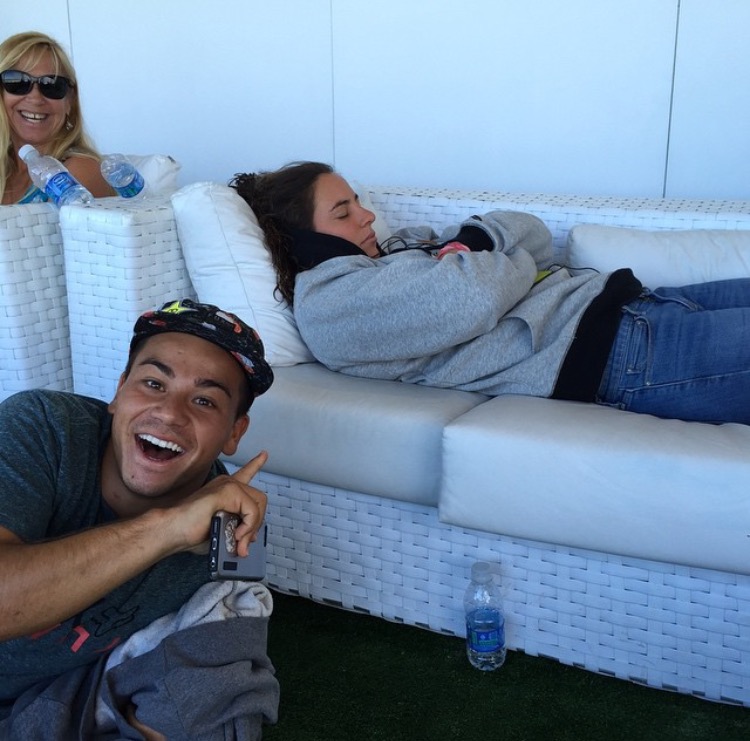 He’s photobombed other people’s catches, led Hawaiian team attacks, and showcased a snoring Freddy P in the same shot as the snack he happened to be munching on. Seemingly everywhere an unsuspecting sleeper may be, Keanu Asing is the one to look out for as the World Sleep League charges into 2016. 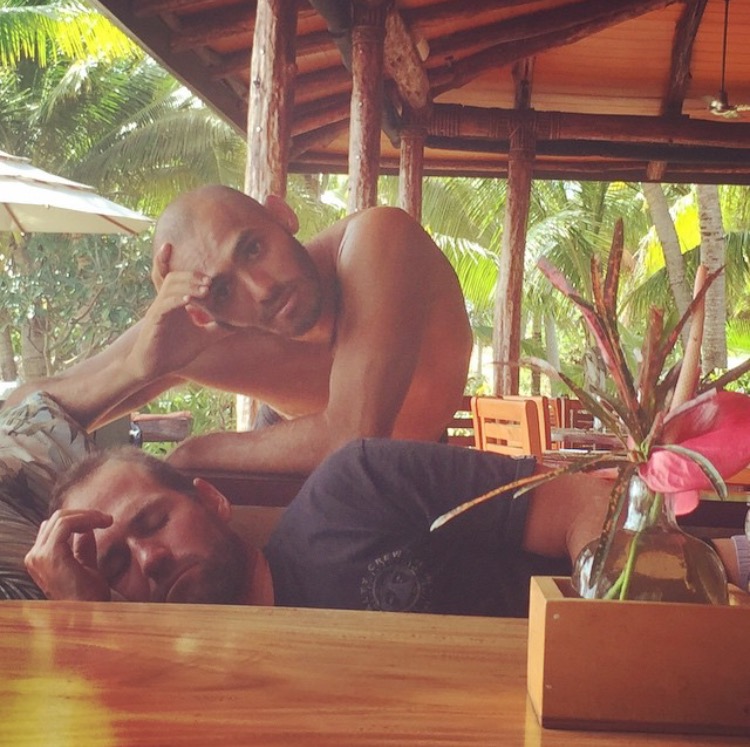 He’s been caught on the massage bed at Trestles and and curled up beside a sleeping dog on the floor in J Bay, but his stylistic catches of CJ Hobgood and Rosy Hodge have made Jadson Andre someone everyone should be worried to catch a nap around. 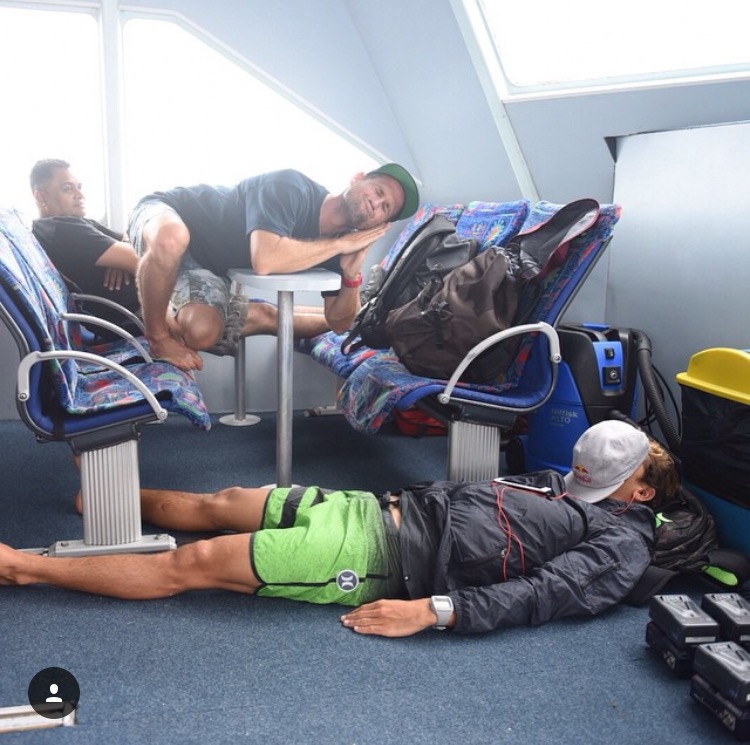 There have been some incredible sleep faces in the World Sleep League’s illustrious history, but with one of our favorite veterans retiring at the end of this year we had to give him Sleeper Poll props for one thing: his consistency. Making the same scrunched-face hand-pillow pose in his epic catches of Julian Wilson and photographer Tom Servais in Fiji was memorable enough, but learning that that is his actual sleep face when Jadson caught him dozing on the same island makes this fan favorite our undisputed champion. Congrats on your win, CJ, we’ll miss you on tour, but hopefully not on the World Sleep League.