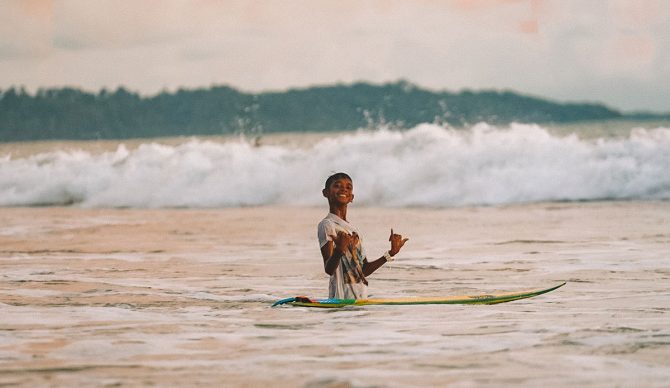 The question remains: Is there really surfing in Thailand? Photo: Audrey Hills

The stage is set and everyone is down on the beach in their board shorts, Hawaiian shirts, and flip flops. Twenty-somethings sell surf suits and bikinis and young boys whiz through the crowd on colorful Penny skateboards. The announcer calls everyone’s attention to the ocean as tiny ankle-biters lap at the shore.  I watch as two young boys run down to the water’s edge, surfboards in hand, and get ready to strap their leashes to their ankles.

I can’t help but ask, “where are the waves?”  Where is the swell for the rashguard clad surfers waiting eagerly on the shore? As I gaze past the crowds and onto the calm seas at Patong Beach, I’m filled with doubt.

The question remains: Is there really surfing in Thailand?

In the coming days, I would see for myself that the answer is a resounding yes, although at that moment I’d have to use my imagination.  Luckily, my mind surfing was assisted by the Thai National Surf Team putting on a show. The standout was a girl named Anni Flynn.  You could tell Anni rips despite being towed into the micro surf by a jet ski. After letting go of the rope she’d smash the lip of a right-handed ripple in the shore break.

I later learned that Anni was not only a junior champion for Asia but had recently won back-to-back World Flowboard Championships. When I caught up with Anni she explained that during the surf season, which lasts from June until the beginning of December, she finds plenty of waves around Phuket.

“When it is really big on the island is when the monsoon hits,” she says. “When you see all the storms and all the rain is when the waves really pick up. They’re not beautiful, the water is grey, they are tumbling everywhere but they have good form for us surfers.”

The waves at Patong were hit or miss during my visit in June, but Anni believes the best surf doesn’t show up until July or August. When I ask her about her favorite place to find surf, she answers easily. “Definitely, Kata.”  Of course, when the surf is microscopic, there’s always the Flow Rider in Patong to practice your cutbacks and turns. It turns out the super-stoked young Thais are finding ways to get in the water and ride their surf crafts almost every day.

“If waves start getting bigger than two foot, everyone is like ‘get the kids out of the water,’” remarks my Thai traveling companion. I wonder out loud if this is a lingering mental effect of the Boxing Day tsunami that devastated this coastline and killed over 5,000 people back in 2004. Except for the very young, most of the Thai surfers I met during this trip were alive during the tsunami and were at least indirectly affected by its devastation.

I asked Tah, owner of Pakarang Surf School and Monkey Dive Hostel in Khao Lak, whether the 2004 tsunami affected the development of surfing in Thailand.

“After five or 10 years, people started coming back to the beach,” Tah says. “Many of the kids here, they lost their family and many people are Moken people. Matt, an expat American, started bringing all the kids from school and teaching them surfing and about the ocean after the tsunami. So, now it’s better. When they can surf they are proud to surf and they go to school and show other people and more people are coming to learn.”

But surfing is still a relatively new phenomenon. Despite wanting to surf since he was a child, Tah only started about six years ago. 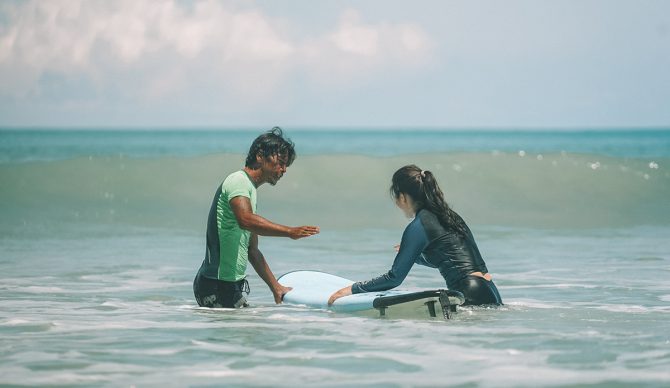 “I think I was part of one of the first Thai groups to start surfing in this area. Many people were surfing in Patong and Phuket for the last 10 years, but here was a hidden place. You see the road coming here, it’s like a jungle. No one believed that you could come here and surf.”

In fact, Tah himself didn’t believe you could surf in his hometown until he was living in Australia and saw photographs of people riding waves in Khao Lak. But things have changed. Just last year, Tah taught over 4,000 students from Bangkok and around the world to surf in Khao Lak’s gentle surf.

I can see why wannabe surfers would flock here. The beach resort community is located just 90 minutes from the seedy shores of Patong but is a world away. The Phang Nga region is noted for its many National Parks and abundant wildlife. The waves are gentle but more consistent than Phuket due to shadowing of the area by Sumatra.

I can hardly contain my excitement to finally get out in the lineup in Thailand. I grab a board from the palm tree-thatched sheds of Pakarang Surf School and run out to the sand. Local kids rip on shortboards while older expats cruise on longboards in the small but punchy conditions. The water is as warm as a bathtub. Beyond the sand, seemingly out of place pine trees line the beach. I pull into a glassy close out and feel the undeniable stoke that is calling all these Thais to learn to surf.

So, what’s next for surfing in Thailand? 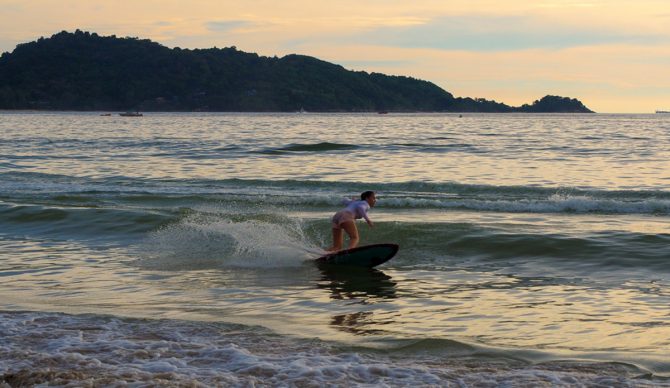 Anni ripping despite the micro-waves in Patong.

Anni hopes that more and more girls get involved. “I want to see the girls get out in the waves and have fun and not care about keeping their skin white so much,” she says. “Just wear sunscreen. If you’re going to get dark skin, get it. I just want to see surfing in Thailand grow so much bigger than it is with girls leading the charge.”

As for Tah, he knows his stomping grounds in Khao Lak will continue to bring the stoke of surfing into so many people’s lives. But first, he has some convincing to do.

“Actually, many Thai people don’t believe we can surf in Thailand. They don’t understand surfing.” Slowly this is changing. Tah is standing by to assist at his very professional surf school that will help both Thais and foreigners surf in Thailand and beyond. “Many people improve themselves. They go overseas and surf and come back to surf the great waves here in Thailand.”