Editor’s Note: “Spot Snapshot” is a series that highlights an image and explains what you’d never know by simply looking at it. As the cliché goes, “a picture is worth 1000 words.” Here, a featured photographer brings you both. See the previous installments from New Jersey (USA) here and Nantucket here. 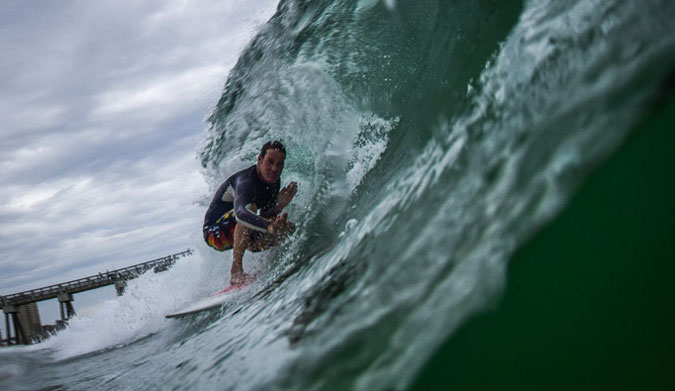 “I took the next set wave to the head, but bounced up super stoked knowing I nailed the shot.” Photo: Rich Brooks

July 19th was the first time that Panama City Beach saw good swell in about two months. I was really excited because I had just gotten my new NIkon D3300 and Ikelite housing a few days earlier, and this was my first session out with it. There are a few decent surf spots around Panama City Beach, but when we get a good swell with favorable conditions, the County Pier is the place to be.

I went down to the County Pier, and was stoked to see some locals in the lineup who are known to shred. One of them was Rob Stalvey, a very knowledgable and talented surfer. I got out in the water, and took about a half hour getting acquainted with my new equipment and figuring out the right camera settings. After catching a couple shots of Rob and the other surfers, Rob and I talked briefly as he paddled back out to the lineup. He gave me a detailed breakdown of the conditions and the break that day. He gave me a reference point on shore where the peak was so I could get into position to capture the best angle. Now that Rob knew where I was and I knew where he was coming from, it was just a matter of holding my position in the break until the right wave came through. It took about 15 minutes until I saw a real nice wave rolling in. I watched Rob as he paddled into it, and I knew this was going to be my shot. He made his bottom turn, came back up the face and executed a perfect stall. I kicked in a little to stay with the wave, and had a perfect three shot sequence of Rob’s barrel. I took the next set wave to the head, but bounced up super stoked knowing I nailed the shot. I looked at Rob and he just smiled, I gave him a thumbs up and we both headed back out to the lineup.