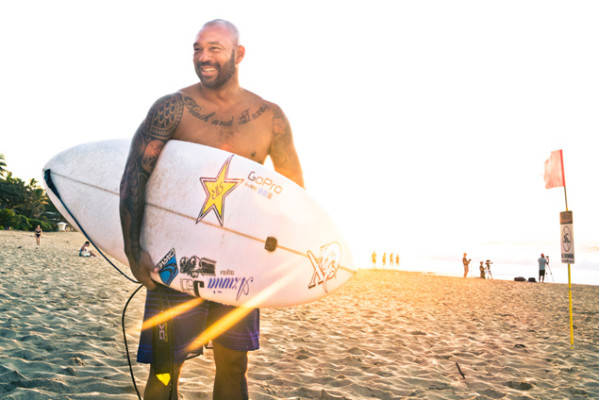 Sunny Garcia has a lot of fight left in him. Photo: Justin Jay

According to a GoFundMe page set up for the family of Sunny Garcia, the 2000 world champ and one of the greatest power surfers of all time remains in the ICU of a Portland, Oregon hospital.

The page, set up by Janae Twisselman, has a monetary goal of $150,000. “On behalf of the Garcia family we have started a Gofundme [sic] to help support them with mounting bills and expenses while our beloved friend Sunny recovers in an ICU in Oregon,” reads the page’s description. “As most of you know, he has been in critical condition since Monday [April] 29th. True to Sunny, he is strong and he is fighting . . . each day brings a glimmer of hope but it will be a very long road ahead.”

Information about the West Side’s favorite son has been minimal. According to our sources and reports that have come out on a very limited basis, Sunny Garcia was admitted to a hospital in Portland and remains in the ICU after an alleged suicide attempt somewhere in the Pacific Northwest at the end of April. According to his family, as of 3:20 p.m. PST on May 15th, it was confirmed that he is on life support, is taking his own breaths with the help of oxygen, and is on dialysis.

In a phone conversation, Twisselman told The Inertia that Garcia’s family is not yet ready to make a full statement and that Sunny’s health is day-by-day but they appreciate all the support for the six-time Triple Crown champion. Twisselman, a brand marketing professional who says she has known Sunny since she worked with him while at Boost Mobile in the early 2000s, posted a hopeful message on her Instagram page.

“I’ve spent the last few days in Oregon with Sunny’s family in the hospital and I can tell you I’ve never seen a more amazing group of people who are by his side 24 hours a day to support him and each other,” she wrote. “It’s overwhelming and heartwarming to see their steadfast dedication and love. Today we received news from a specialist who says there is a chance he can recover. But the medical bills and expenses for them being in Oregon are mounting, and any help or donations would be greatly appreciated as they have an incredibly long road ahead.”

Names like Thomas Carroll and Ryan Sheckler showed up on the GoFundMe donation list while Taylor Knox and other notable surfing legends have begun to share the page as well.

Garcia has spoken candidly several times about his battle with depression on his Instagram page and in interviews. “I suffer from depression and probably have for a while but really started noticing it after winning a QS event at Sunset in 2012,” Garcia said in an interview with the Facebook page, Humans of Surfing. “I have unfortunately thought about taking my life more than a few times but kept reminding myself that I have a great life and too many people that love me to leave so I just keep fighting to find my happy place. No one likes to talk about depression but for sure guys on tour suffer from it. I feel it’s good to talk about and people need to know they’re not alone. More people suffer from it than they know.”

With the lack of information available, The Inertia has been inundated with comments and messages of concern over the health of the beloved champ. This much is certainly true: Sunny Garcia remains in the hearts and minds of his fans and fellow surfers as he and his loved ones battle through a challenging time. Our thoughts are with his family and friends as the surfing world awaits more positive updates on his condition.

Editor’s Note: This article was updated Wednesday, May 15 at 3:20 p.m. PST with additional information on Sunny Garcia’s health. You can donate at the GoFundMe page here. We will give further updates as more information becomes available.