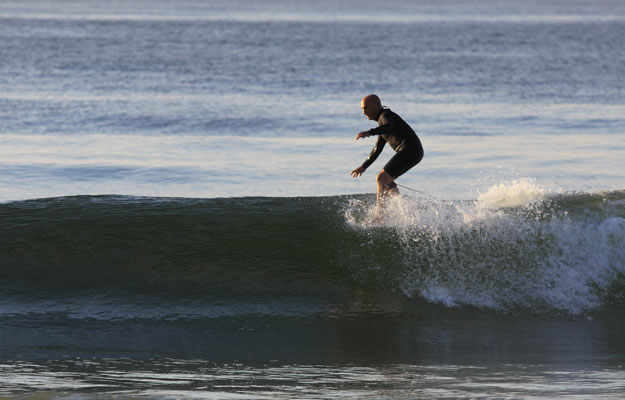 "There was fear, but the joy was overwhelming," said Luthringer of his first wave. " I got addicted right away,” he told me.

“It was a good experiment,” Luthringer says thoughtfully.  “I was able to ride it, but it was not… good.”  He never had hands-on training.  He observed and replicated.

“I think my fifth or sixth surfboard was,” he says with an emphatic pause, “really good.  I was doing cutbacks on that board I couldn’t do on any other board, so then the addiction was building–to try and achieve that perfect board.”

Luthringer started his own company, Toad Surfboards. He named it after his friend, who died of cancer at 18 years old.

In March of 1970, Luthringer and a friend drove to Florida to visit the then-love of his life, Sandy.  Their Toyota Corolla hit a fog patch and collided with a tractor-trailer.  He doesn’t remember the accident, but by the time he reached his second hospital in as many hours, his pulse was non-existent.

The hospital released him in less than two weeks, but it would take a full year before he recovered from the wreck.  He sold Toad Surfboards to a previous partner.

Luthringer eventually rented a factory space on Casino Pier. Gene Cottrell came up and worked for him.  Together, they churned out 20 boards a week.

In the summer of 1972, the 21-year-old discovered that his board dealer was also a coke dealer who had taken 50 of his boards as payment to a higher-up. At the same time, Sandy abandoned him.

“Those boards disappeared,” he says.  “All of that effort, and my relationship… it was the perfect storm.  For two weeks, I sat with my mouth open in my factory and couldn’t move, couldn’t work.  I never hit anything rock-bottom like that in my life, but it was probably the most powerful thing that ever happened to me.”

He turned to religion for help in healing, and wound up designing a new church.  When he was 16 years old, his father had asked him what he wanted to do with his life, and offered architecture.  Luthringer thought it was out of his reach.  After surviving that immense pain, he decided he was capable, after all.  “That [architecture] was one of the most exciting things to me besides building surfboards,” he says.

He graduated from Pratt Institute’s architecture program in only two and a half years. After getting his license, he bounced around a couple of local firms, but now he works for himself.

He once told Sandy that if he couldn’t make it as a surfboard builder, he wanted to become an architect.  He has succeeded with both.

Today, the architect dons a mask to protect his lungs from airborne foam.  He places a blank on top of a sawhorse and carves out the rails with a 2-foot handsaw.  Next: three passes on each side with a 41-year-old planer that’s “still going strong.”  Countless measured swipes with a Surform, a carpenter’s tool that looks like a cheese grater.  Work with the Surform is violent at times, especially when Luthringer rasps the wooden stringer.

It’s a little-known fact that surfboard blanks have a tough outer shell, which Luthringer calls a “skin.”  He removes it with a sander that sprays foam on the floor, the shaper’s clothes, and his previously clean hands.  After that, there’s some touch-up Surform action, followed by gentle abrasion with a piece of sandpaper wrapped around a wooden block.  Finally, he pulls a strip of screen–the kind found in your windows–over the rails to smooth everything out.

At one point in his career, Luthringer made 100 boards in a single summer.  Today, he makes far fewer in a year.

“I like surfboards to have my thoughts and my hands when I do it,” he explains.  “I make maybe 10 a year, all for friends and family.  If I come across someone who shows enough interest, then I’ll make it.”

Luthringer admits that it can take up to six months to get a finished board out of him.  “Or, if I’m in the mood, it can be two weeks,” he says.  “That’s how I have to do it because I do it on my own free time.  It’s not about the money; it’s about my expression and keeping the craft.”

He recently shaped a 5’10” fish and flew it down to his son, Ian, who is a lawyer in Florida.  Ian used to eat doughnuts and drink orange juice while his dad shaped in the factory.  He learned how to repair dings as a kid, and then how to set fins.  At age 16, he shaped his first board from start to finish.  He’s made two more and says that while they may look fine, they don’t work well.  “He makes it look really easy and it’s not,” he says of his father.  “Whatever he does–it’s magic, that’s for sure.”

The work of art in the dusty garage is his first board of the year, and he doesn’t seem at all rusty.  He’s constantly moving: “I try not to be static when shaping; I think about how the water moves over the board,” he says, as he adroitly continues sculpting.  “If you move your body, you’re moving the shape of the board.”

He utters an “oohp” as one of his tools slips, but he remains relaxed.  He explains that you have a lot of room for error before a board is lost, because the board will evolve.  It seems like that is a luxury that comes with experience.