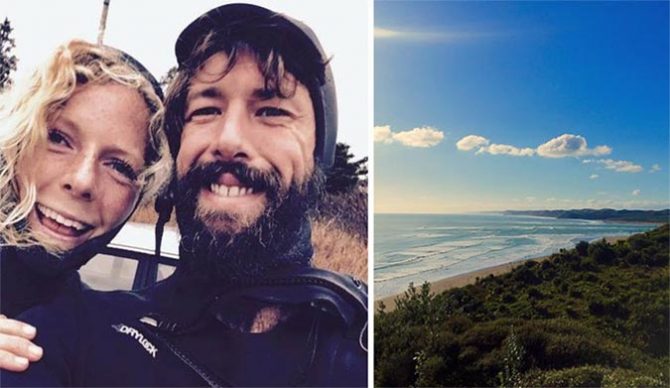 By all accounts, Sean McKinnon was an incredible human. Photo: Facebook and Unsplash

Australian surfer Sean McKinnon – who by all accounts was a very good chap always ready to charge when the swell was on – was gunned down in a camper van while sleeping with his girlfriend, according to reports.

McKinnon, 33, and his fiance, 32-year-old Canadian Bianca Buckley, were apparently sleeping on a scenic section of highway near the famous left-hand point break when they were awakened in the middle of the night by a lone man demanding their keys. He then shot McKinnon, driving off with him still inside after Buckley managed to escape.

The women then ran barefoot at least two kilometers in the night to find help and call police. According to reports, the rented camper van was found nearly 50 miles away with McKinnon’s body inside. Raglan is a quiet surf town on the west coast of the North Island and the incident has rocked the normally-peaceful community.

McKinnon, say friends and family, was an extremely welcoming and open person, a musician, and a hard-charging surfer who, according to his Facebook page, is from Nirranda, near Warrnambool in Victoria, about 155 miles southwest of Melbourne.

“I just can not believe that such a nice person could have their life finished like this,” said Simon Illingworth, who’d surfed with McKinnon for 15 years in his native Australia. “He was just so lovely … such an honest, cruisy guy.”

Olivia Tutungi, president of the Port Campbell Boardriders club near where McKinnon resided, told Australian media how much the local community was hurting over the incident: “Sean was completely unique and he lived right in the moment. He was a fantastic surfer and musician, he was a real natural talent, but he also had a super-big heart,” she said.

After New Zealand was shocked by the Christchurch shootings, authorities launched a gun buyback program and said more than 200 weapons were seized by the state. Of course, this does little to help the family and friends grieving in this situation. Police continue to look for the fugitive in what can only be described as an extremely sad and random situation.