Surfer’s Code: I Will Always Paddle Back Out 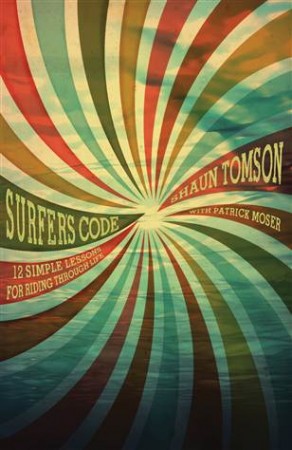 Now if anyone had told me while I was getting drilled by that set at Waimea that the business world would be a lot harder than surfing, I never would have believed them. But after retiring from the tour in 1990 I had two devastating free-falls in business, both of which shook my confidence even more than the Bay. And yet the knowledge that I did not give up on myself that day and take the easy way out has carried me through each crisis.

The first occurred in 1995. I was sitting in the waiting room of well-known apparel company in Southern California. It had not been my first interview for a job. Not even my second. What’s more, I had never had to interview before because my whole life I had worked for myself. I had arrived that morning tens of thousands of dollars in debt after having closed the doors on my own apparel company in South Africa. Three years of hard work down the drain along with the dream of prosperity in and with South Africa. And the consequences of going under at that point extended beyond my own survival to that of my wife, Carla, and my five-year old son, Mathew. After an extraordinary career on the World Tour as a champion surfer, as the owner of a successful apparel company that had sponsored other surfers, as someone who had always been optimistic and successful, I sat in that chair and realized that people had very little interest in Shaun Tomson. Suddenly I was no longer a success.

I came from a family of successful entrepreneurs. My father and uncle had both owned their own businesses, and my cousin, Michael Tomson—also a professional surfer—had founded the surf apparel company Gotcha in 1978. I followed suit in 1980 by founding Instinct. Even from the beginning of my surf career I had wanted to parlay my success on the Tour into long-term financial security in the business world. Instinct was created with this in mind, but after I retired from the Tour in 1990, I was bought out of my share in the company. So I returned to South Africa to finish my university degree. Afterward Carla—who had a degree from London’s Saint Martins College of Art and Design—and I decided to start over again in our native country. We called our company simply Tomson.

It was a personal and financial failure directly linked to the volatile times in South Africa. We were a country in political transition during those years, literally on the brink of civil war. Although the democratic elections in 1994 transpired peacefully in the end, the years leading up to the elections were extremely violent. The Natal area, which included Durban, had been placed under a state of emergency by President de Klerk. At stake, of course, was over three hundred years of white-dominated rule. Very conservative factions among the Afrikaners had denounced de Klerk and fallen into league (amazingly enough) with equally radical elements among African militants: these forces had a vested interest in the failure of a unified South Africa, which would have meant a loss of independence for them; for the Afrikaners especially, a black-dominated government could mean retribution for Apartheid. So black and white fought battles in the streets against Nelson Mandela’s African National Congress. To add to this chaos, South Africa had been in deep recession. Our business simply was not strong enough to survive such political and economic hardships. After three years of working and struggling I found myself in Southern California wondering not only about the future of South Africa, but in particular the short-term prospects for me and my family.

After the unsuccessful interview I was very shaken, not unlike the feelings I had experienced after my wipeout at Waimea, but more on an emotional level. I had a similar life-changing decision to make, but this time I understood, as I had not before, how serious the consequences of that decision would be for my family’s future. It would have been easier to get on a plane and go back home to my wife and son rather than face another interview and risk those terrible blows to my ego. I phoned Carla in South Africa. Her advice to me was simple: keep looking for a job. She knew—for the sake of my own self-confidence—that I had to find something, anything, before returning home. She was right, and I needed to have that reaffirmation from someone so important in my life.

I did paddle back out and find a job with a great clothing company, Patagonia. Then another one in the apparel division at O’Neill. After three years with those companies, Carla and I decided to start our own company again, this time in Santa Barbara. We knocked on doors, talked about our ideas, and we raised over a million dollars in investments. The apparel business is a very demanding, time-consuming endeavor, and we could not have worked harder. Carla designed all the clothing and directed production while I oversaw the day-to-day business operations. After three years we had built up a great product line, with hundreds of distributors from California to New York. And then 9/11 hit, and the bottom fell out once again.

Our company, Solitude, experienced what many businesses did after the terrorist attacks: sales plummeted, and we had a hard time finding investors to recapitalize. Apparel is an especially expensive product to fund with a great outlay of time and capital on the front-end (to make the clothing) with the possibility of very little return due to changing trends, or even an event as unforeseen as the attacks on the Twin Towers. To make a long story short, I was looking at my second business failing in less than ten years. We had no cash coming in to fund our next season, and investors were holding onto their capital until the political and economic situation stabilized. Overall, the situation was not unlike the turmoil leading up to the elections in South Africa.

On a Friday we began clearing out our offices in Santa Barbara: furniture, inventory, personnel. Everything. Except three things: my desk, my telephone, and a computer terminal. I had no idea what I was going to do come Monday, but as long as I had a phone hooked up I could still make calls.

Turned out I didn’t have to. By chance one of my friends got talking with another father-Randy Paskal- at their sons’ Little League baseball game the next day. Randy and his father were looking for investment opportunities, and of course I was looking for investors. Carla and I met the Paskals the next day, on Sunday, and we shook hands on a deal. Monday morning we started moving everything back into our offices. What is it they say in baseball? It ain’t over till it’s over.

I have faced more competition than I ever did in surf contests, and I certainly have gotten my fair share of poundings. But I have always made it back up. Whatever comes over the horizon at me, I draw strength from knowing that my experience in the water supports other aspects of my life that now take priority. I may yet get worked over again in the apparel business and washed up on the beach. Home will always look like a comfortable place to rest and recover. But you know I’ll always be paddling back out again.

Excerpted from “Surfer’s Code” by Shaun Tomson with Patrick Moser, Gibbs Smith, 2006, 2011 and available on Amazon. Tomson was also recently featured on NBC’s Today Show. Watch the interview below: