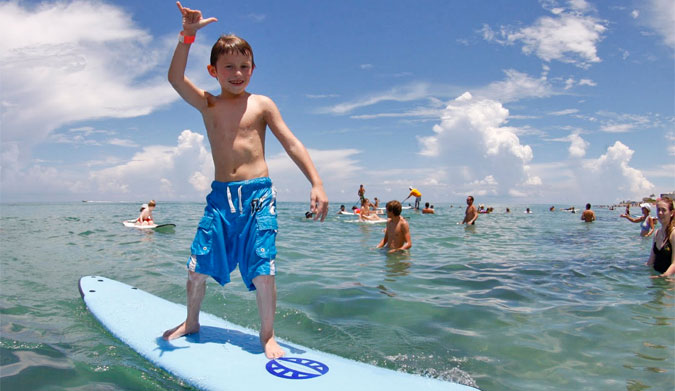 Nothing but stoke at Surfers for Austism events. Photo: SFA

Even if you were standing on the sand the day localism died, you probably wouldn’t have seen it because there was so much else going on. Like the heat, for example. You could feel its heavy weight bearing down on your shoulders, but that’s a typical Florida summer day. The beach was crowded, Bob Marley was oozing out of the loudspeakers, tents were lined down the beach, and children were finger painting on Flagler Beach’s fire trucks. This is the day localism died.

Most of the children who were surfing the waist high rollers all morning were diagnosed with some form of autism and utilized Surfers for Autism for therapy and simple family fun. At every SFA beach festival, which lands in 10-13 Florida beaches every year, lunch is free for participants, their families and volunteers.

The majority of volunteers were local surfers, which, at the time, seemed a bit odd given the extreme sense of localism in these parts of Florida. Even guys off to the side that were not directly involved in the event felt the infectious spirit of giving. I witnessed one guy dropping in on another. They both kicked out near the sand, and when I expected them to go at it, they exchanged apologies and smiled.

For the next several hours, words echoed from the water: “No, you go!” and “No, this wave is all yours” and “Don’t worry about it. It happens” and “Great wave! What was your name?” The sense of community and comradeship down at the beach that day was unlike anything I’ve ever experienced. It was overwhelming. This was the day localism died.

Standing on the hot sand, it became evident that those with autism weren’t the only ones receiving therapy. Volunteers were filled with an overwhelming sense of joy to be apart of such a wonderful cause. And as incredible as the day was, it has been fascinating to see how the surfing community continues to shows up in the dozens to similar events. Whether it’s helping out someone else’s family, banding together to stop the degradation of a local spot, voicing environmentalism, hoisting sandbags in front of houses, or providing financial support to those blitzkrieged by natural disasters, the sense of community involved in the simple will to help others is precisely what we need in order to deal with the dire challenges our world faces.

Visit Surfers for Autism to see how you can get involved.