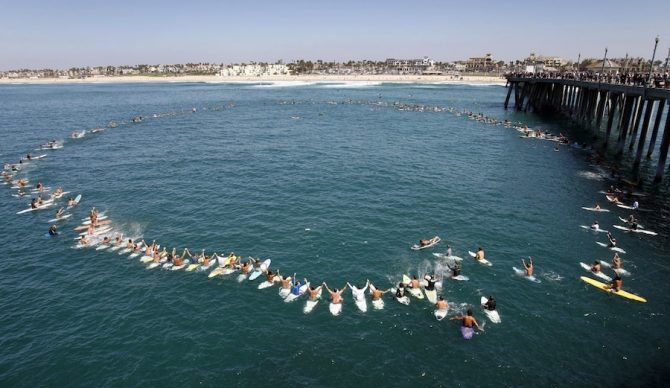 Surfing’s inaugural Olympic showing is nearly three years away. Numerous shoes have yet to drop regarding how surfers from around the world might qualify to compete, much less who will actually be surfing. Still, the fervor surrounding the sport’s inclusion in the 2020 games has spurred distaste among some, and a complete embrace among (I’d venture to guess) a majority of surfers.

In no surf town across the USA has the excitement surrounding surfing in the Summer Games been more pronounced than in Huntington Beach, where locals, city officials, and business owners have come together and hatched a plan to set a Guinness World Record for the largest paddle out ever, all in solidarity of the 2020 Games in Tokyo.

“I actually had a dream about it and I think Duke was the first person I texted about it,” Diana Dehm, executive director of the International Surf Museum, told me as she pointed to Duke Aipa, surfer, shaper, and son of the legendary Ben Aipa.

Aipa nodded. “She told me the idea and it was kind of like WHOA,” he said as his eyes got wide.

The paddle out intends to attract more than 500 surfers – participants need not live in or be from Huntington Beach – and organize them into color groups that mirror those of the Summer Games, ultimately forming a giant ring just north of the pier.

Set to take place on June 20th, the “Surfing Circle of Honor” will be more than a world record-breaking feat. It’s a celebration of surfing’s inclusion in the Summer Games, and an effort to demonstrate the grassroots unity that exists in Surf City U.S.A. surrounding that ideal.

“You know in most cases a paddle out is in memoriam of someone, and it’s a celebration of life, but it’s solemn,” said Aipa. In this case the Ring of Honor will be the first of its kind as a full on celebration of unity and diversity, which is exactly what the Summer Games represent.”

It’s also not outside the realm of possibility that Huntington Beach could host Olympic surfing in 2024, if Los Angeles gets the nod from the International Olympic Committee this September in Lima. Then it would come down to surfing’s insured inclusion in 2024 (which could be put in jeopardy with a poor showing in 2020) and a decision from the city of Los Angeles. For many in Huntington, though, that prospect is a compelling one.

“I’m from Hawaii, but my dad’s got a long history of coaching some big names from the pier,” said Aipa. “The idea that ultimately he could sit from that same spot in seven years watching his grandson compete for gold… it’s incredible.”

Anyone and everyone that plans to be in Huntington Beach on June 20 is invited to be a part of history and participate. Sign-up forms and information are available on the International Surfing Museum website.