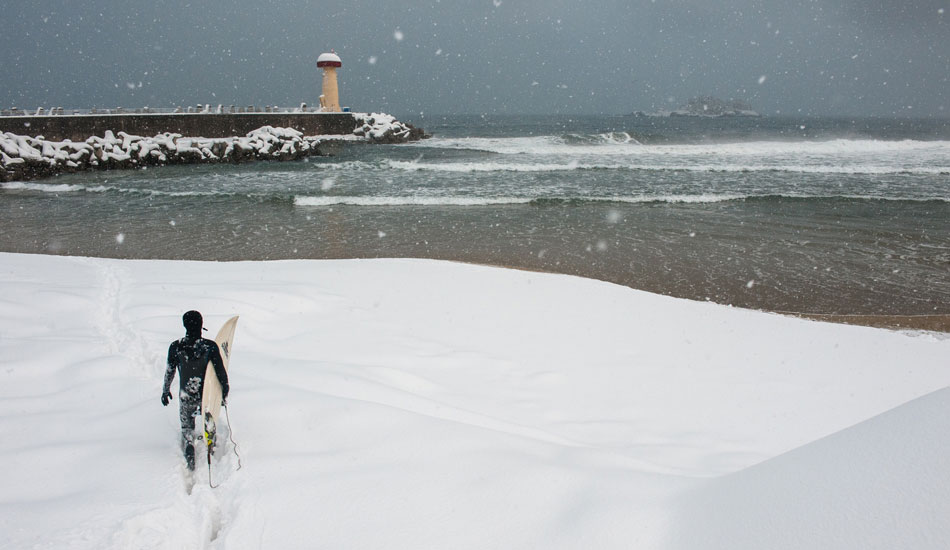 The East Coast of Korea has some of the most consistent and powerful waves in the country. With ever-improving forecasting technology, modern social media, and South Korean connectivity, the short-lived swells which originate in the East Sea are no longer left unsurfed. Photo: Shannon Aston. 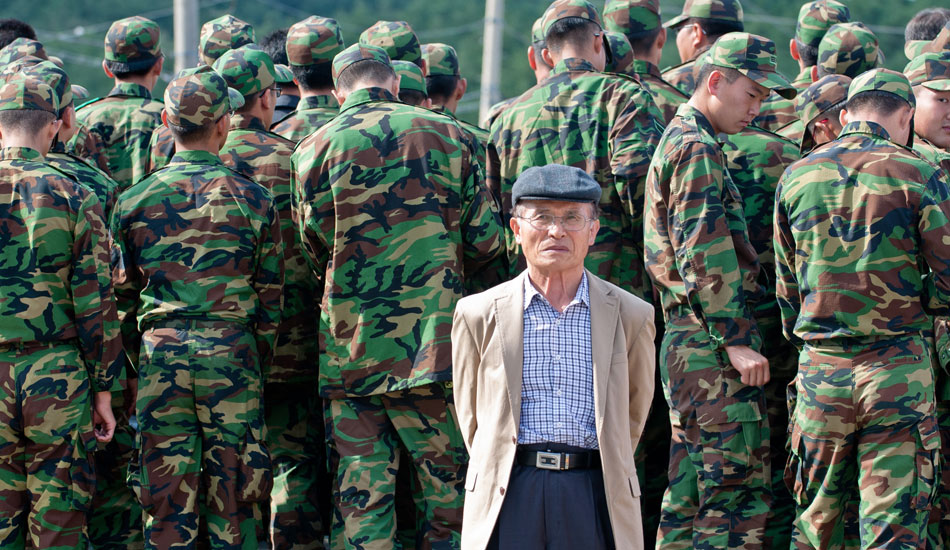 This is a demilitarized zone. Photo: Shannon Aston. 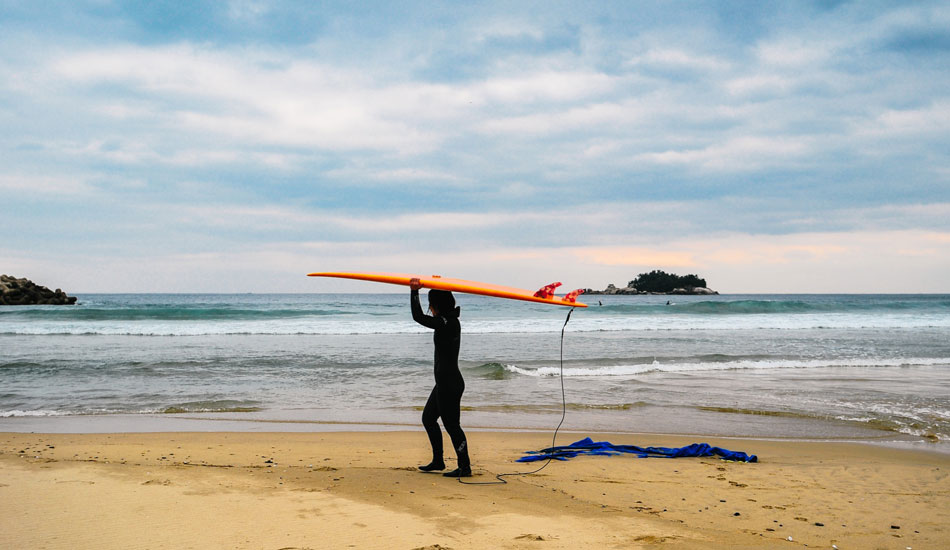 As a lifelong surfer, the mixture of this semi-remote location, exotic culture, and the three distinct groups all occupying the same area is incredible to me. Photo: Shannon Aston. 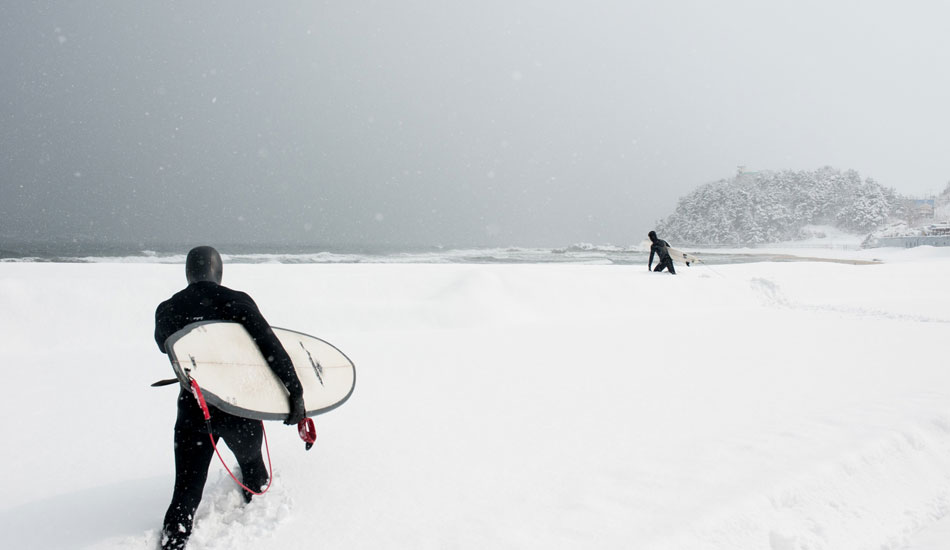 And you thought you were committed to surfing. Photo: Shannon Aston. 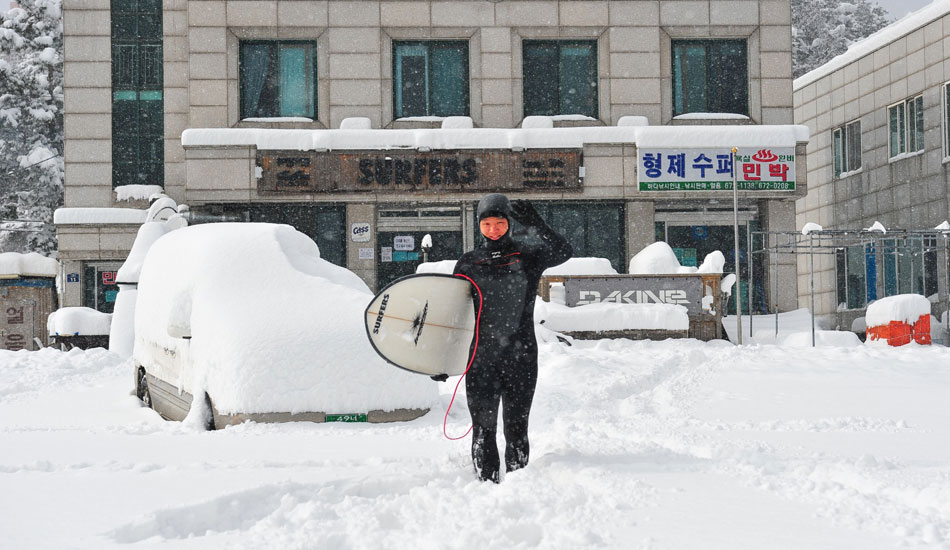 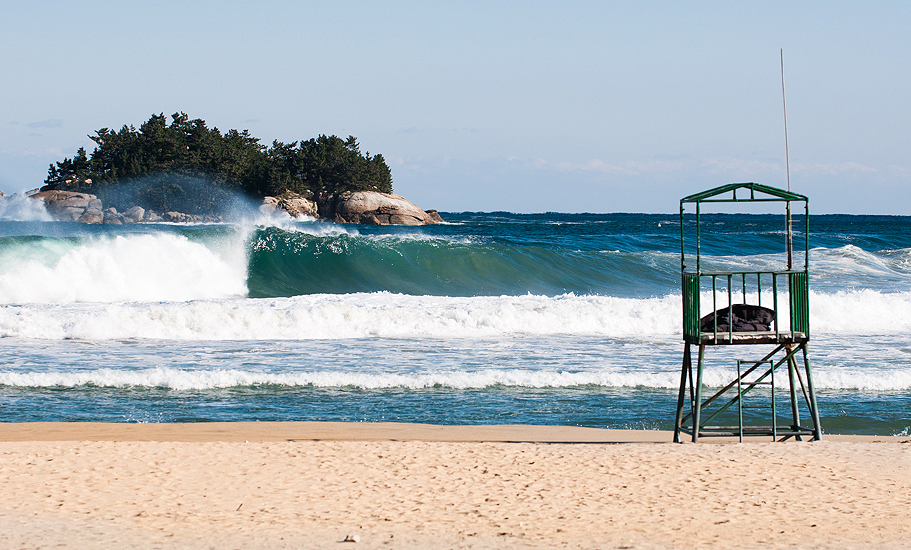 A punchy rip-bowl most of the time, 38th Parallel Beach has many moods and faces. Here she shows us her “bombing left bank” persona. Photo: Shannon Aston. 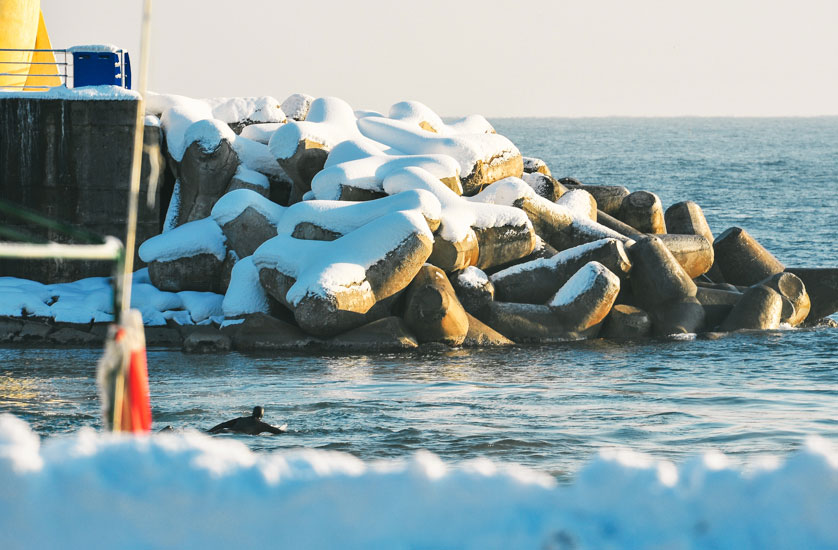 Derek Sung drove three hours in the snow and ice in the middle of the night from Seoul to be here bright and early to paddle out for a few. Photo: Shannon Aston. 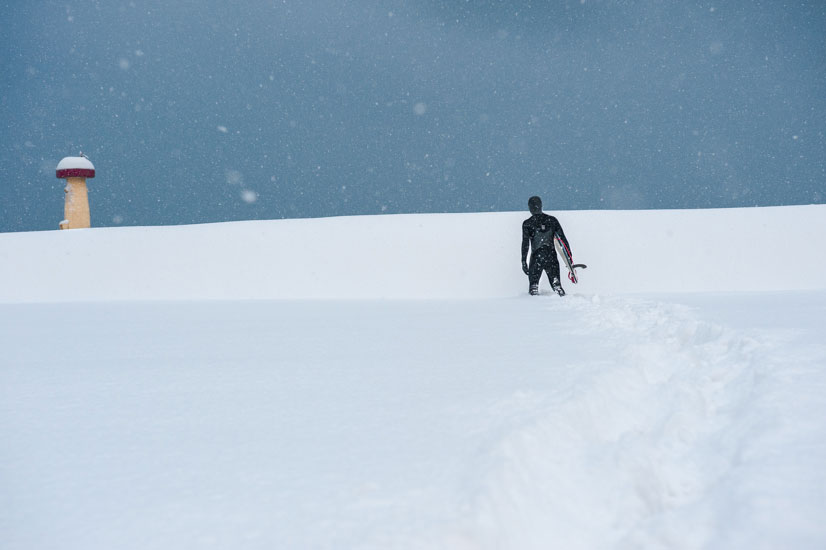 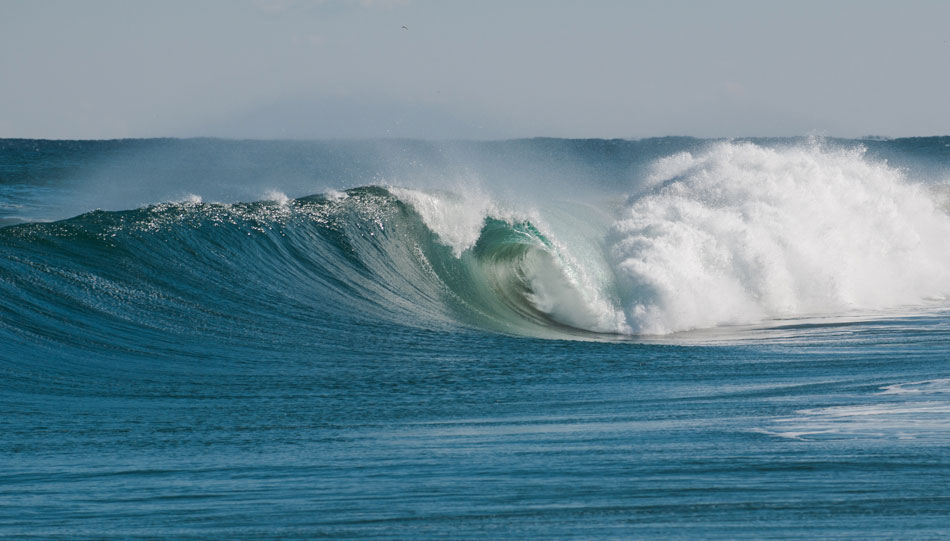 A simple wave, yes, but a beautiful, green-blue wave peeling through South Korea near the hostile DMZ shows us that anywhere can fire on it's day. On this day, it was South Korea! Photo: Shannon Aston. 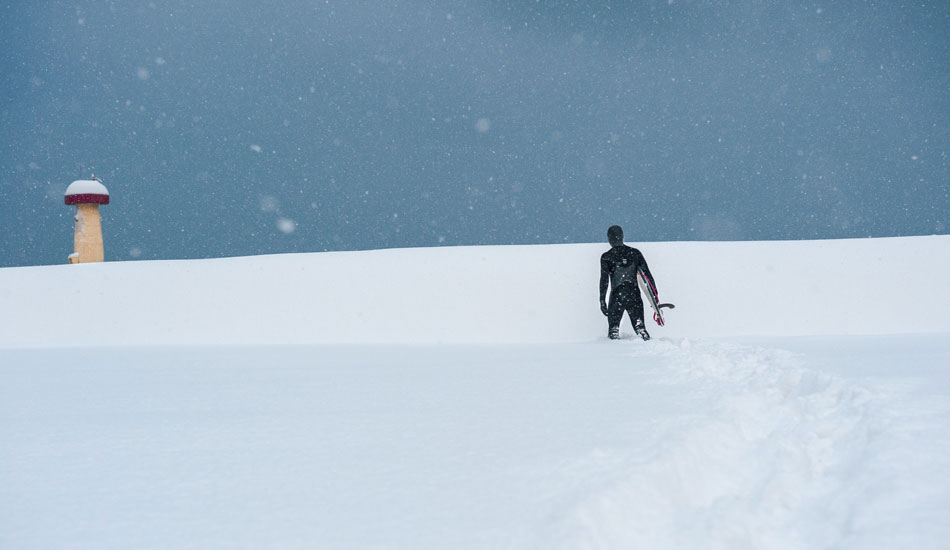 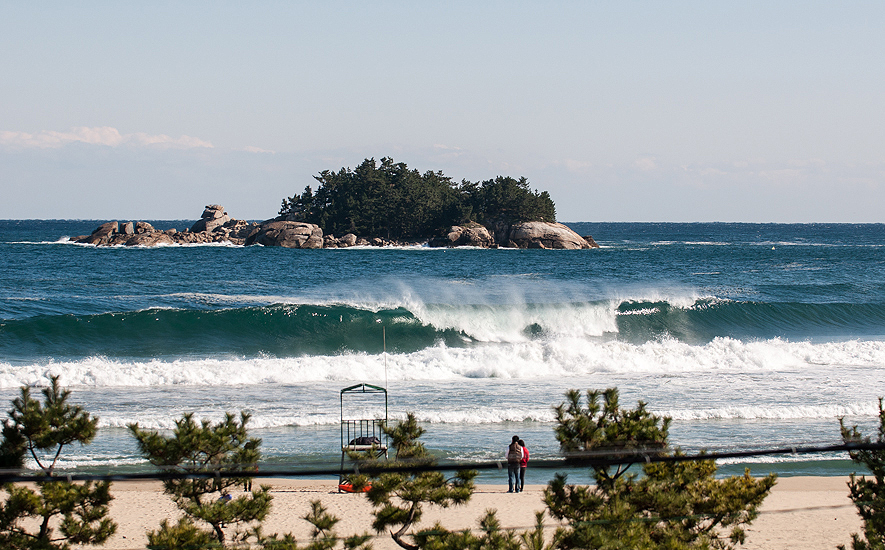 A powerful fall swell unloads on the shifting sands of "sahm-parl" beach. As the brutal Korean winter approaches, the localized storms gain intensity and send in powerful, short-lived swells. I shot this from my guest room window as I suited up in my 5/3 and gloves for an arvo session. Photo: Shannon Aston. 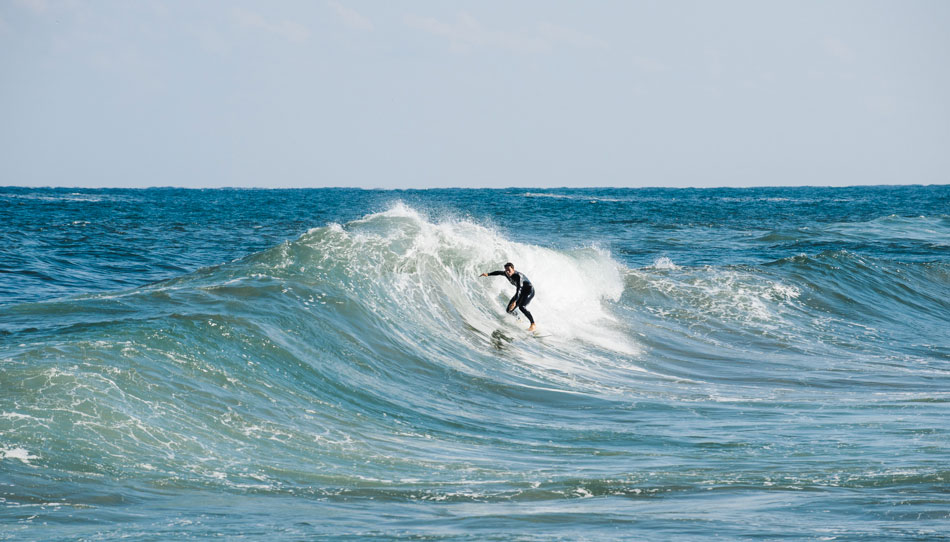 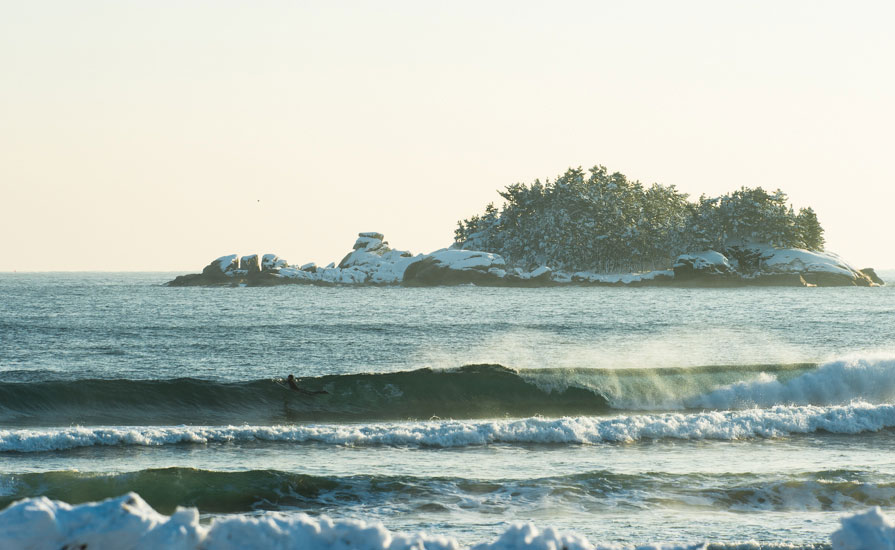 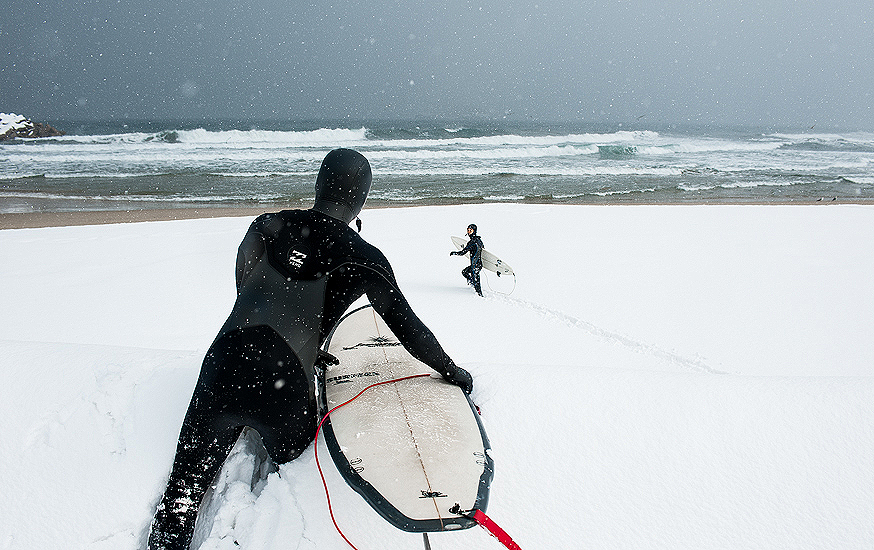 Korean surfers, Moonjun Bae and Young-ik Son, clamber over huge snowdrifts to get out there for a couple of chilly peaks. Photo: Shannon Aston. 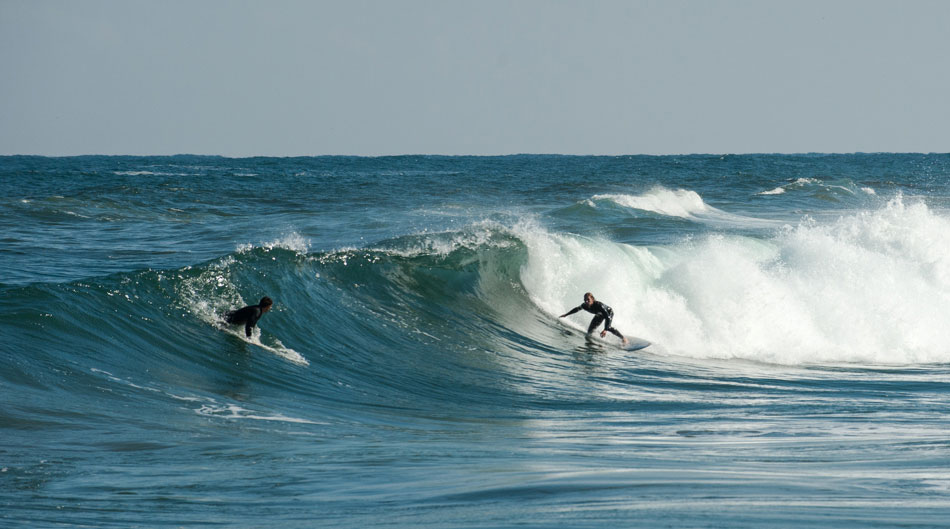 Kiwi Dan Mitch skipped work and drove all the way down from the mountains to line up this fun 38 wedge and make it to the right place at the right time. Photo: Shannon Aston. 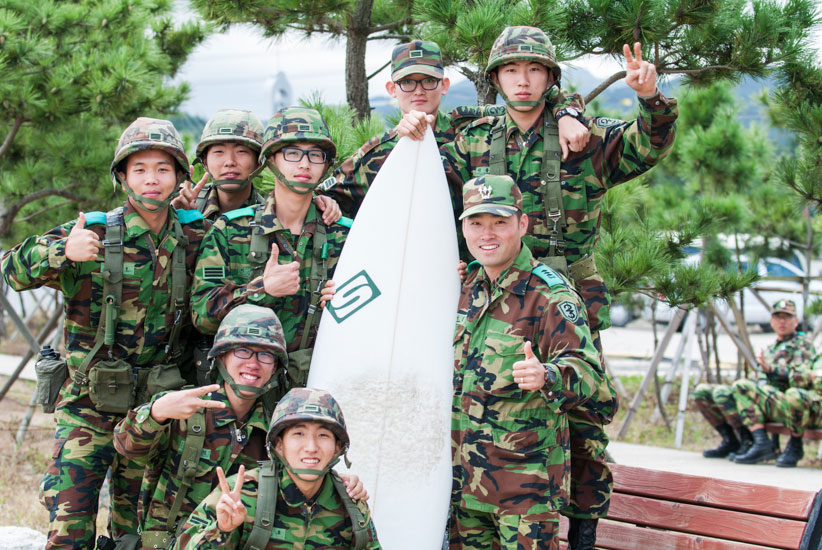 Some young ROK soldiers break the hardship and monotony of their compulsory two year military service defending Korea and grab a chance to pose with my surfboard during a military exercise and a pumping NE swell. I wonder if any of these guys know what a thruster is? Photo: Shannon Aston. 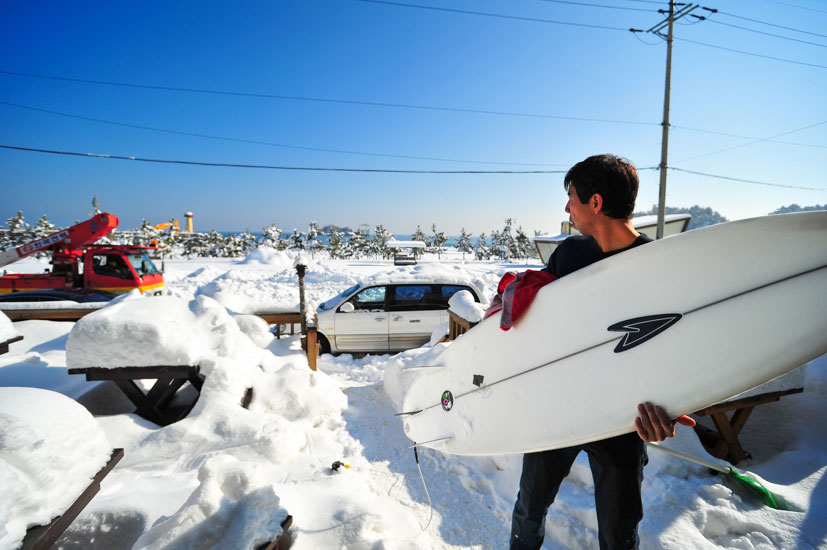 Derek, a Korean-American by way of Hawaii and the South Bay, dries off after the chilly morning session. Photo: Shannon Aston. 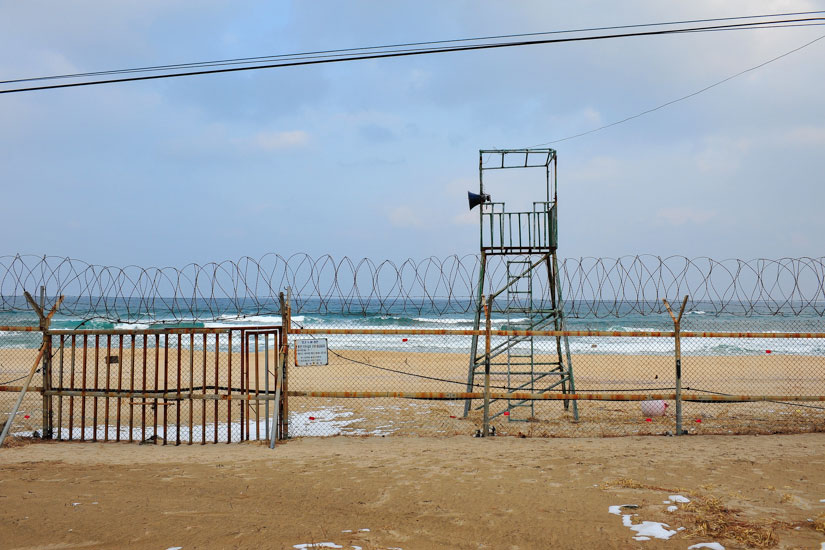 Most of the coastline on the east and west coasts are fenced off and strictly patrolled. Makes finding new surf spots tricky. Photo: Shannon Aston. 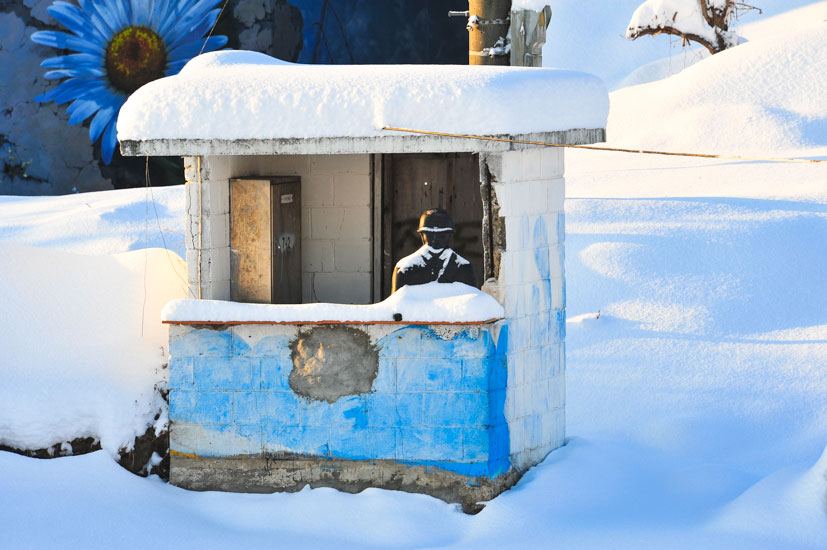 One of the ROK decoy stations. The plastic soldier is covered after a massive snowfall in January. Photo: Shannon Aston. 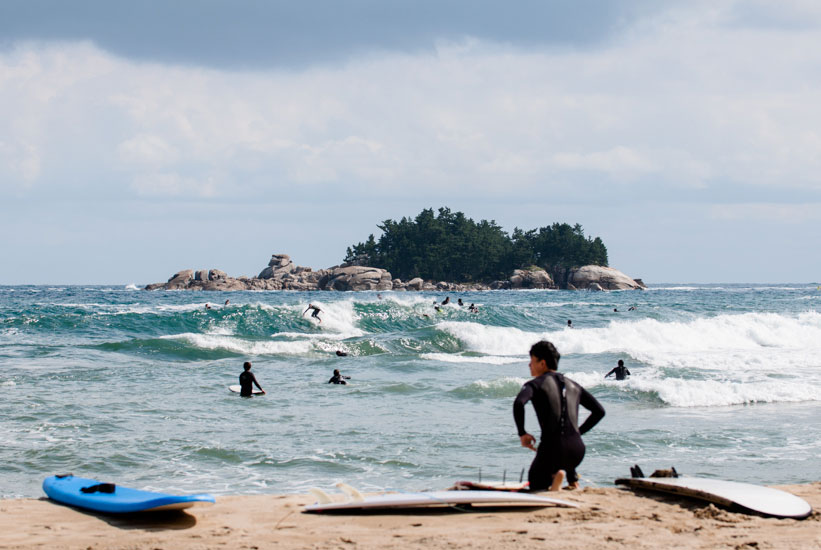 Byron Bay native Ian Coshy grabs a wind swell wedge during the early fall off the frothing local crowd. Every surf you have in South Korea feels 10x better than a regular surf because there weren’t supposed to be any good waves here. Photo: Shannon Aston. 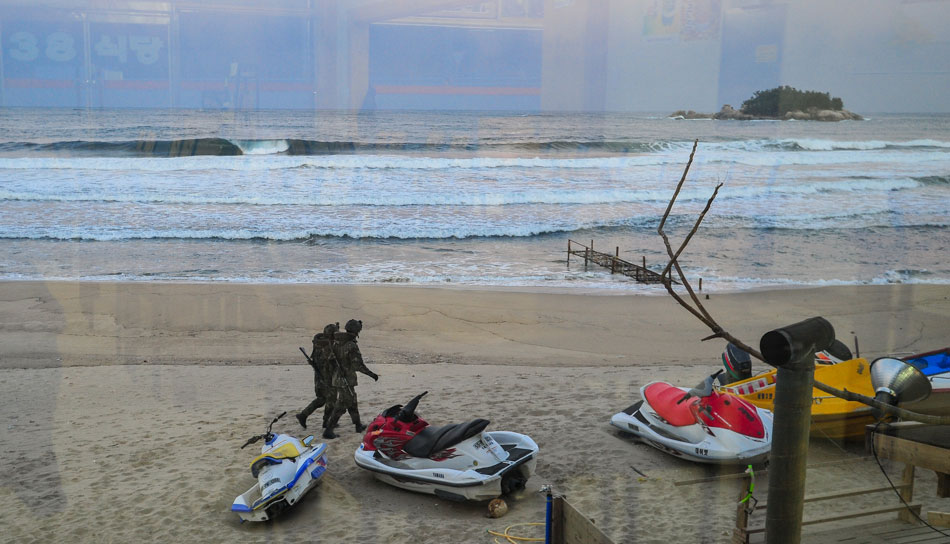 All fences are patrolled day and night by the young soldiers. Lucky these guys weren’t surfers. Photo: Shannon Aston. 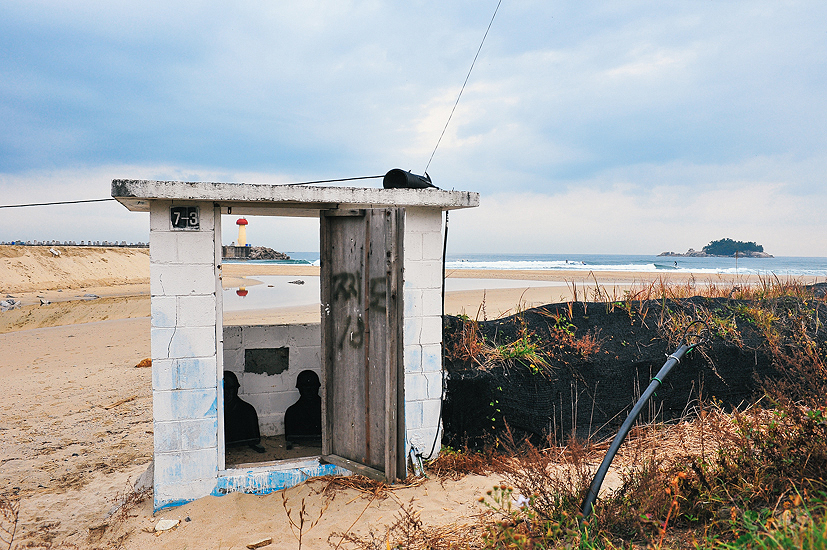 An aging decoy guard station for the ROK (Republic of Korea) army seen here as the dropping swell trickles across the bank and some punters get the last of it on a Sunday morning. Photo: Shannon Aston. 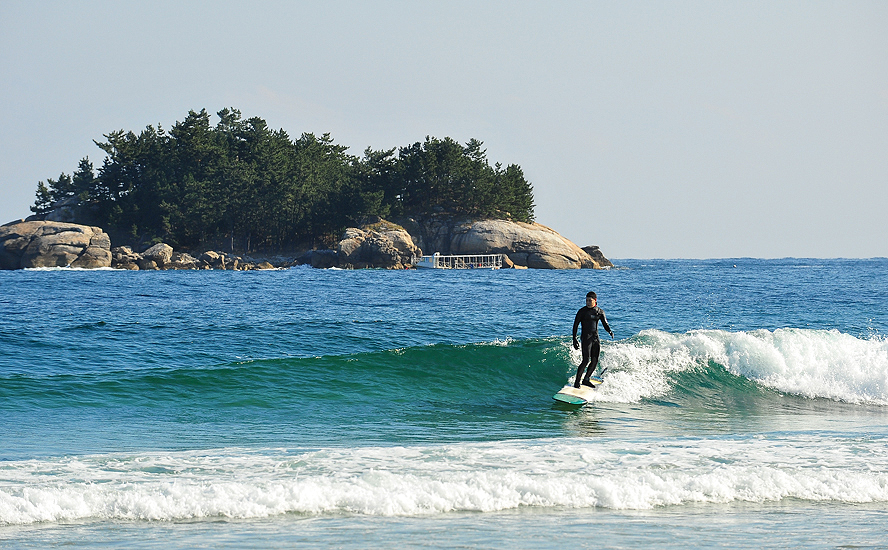 On one of the last calm days of the fall, a local gets a nice peeler with Jo-do Island in the background. Photo: Shannon Aston. 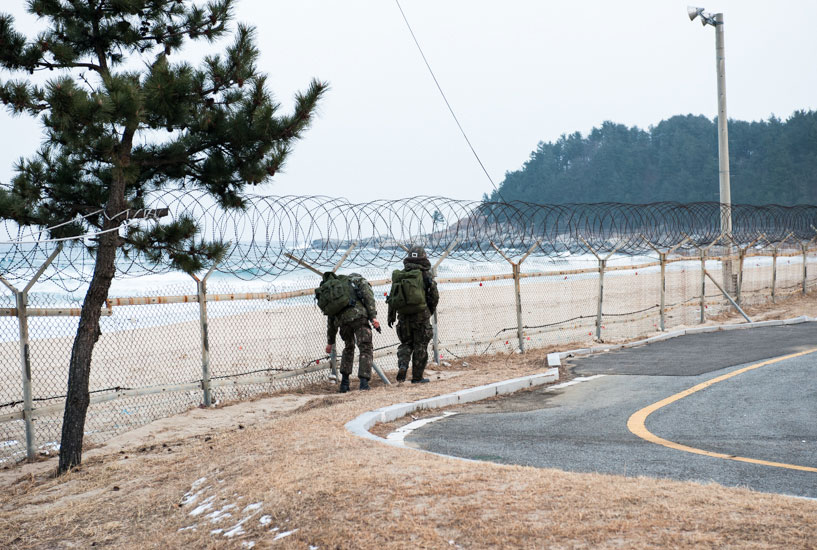 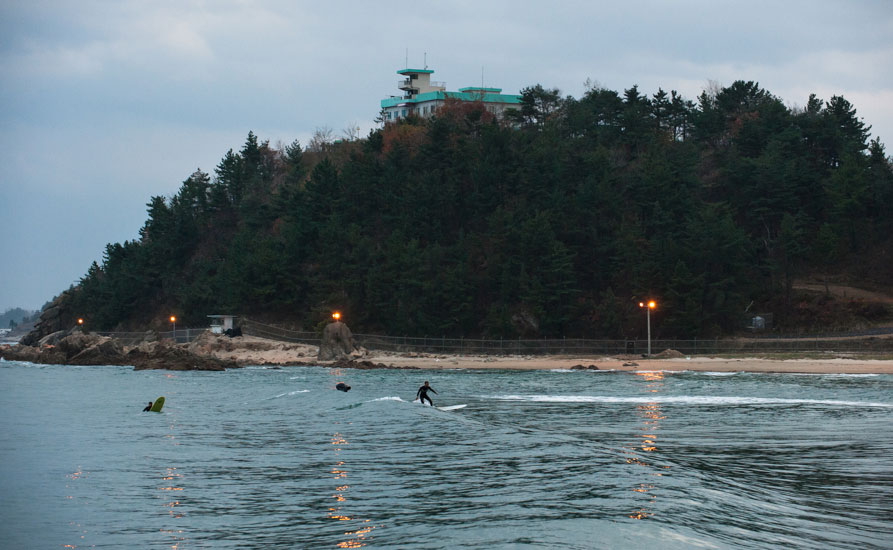 A few longboarders push it right til dark in the fall. The background is framed by barbed-wire fences, military spotlights, and a ROK guard post. Photo: Shannon Aston. 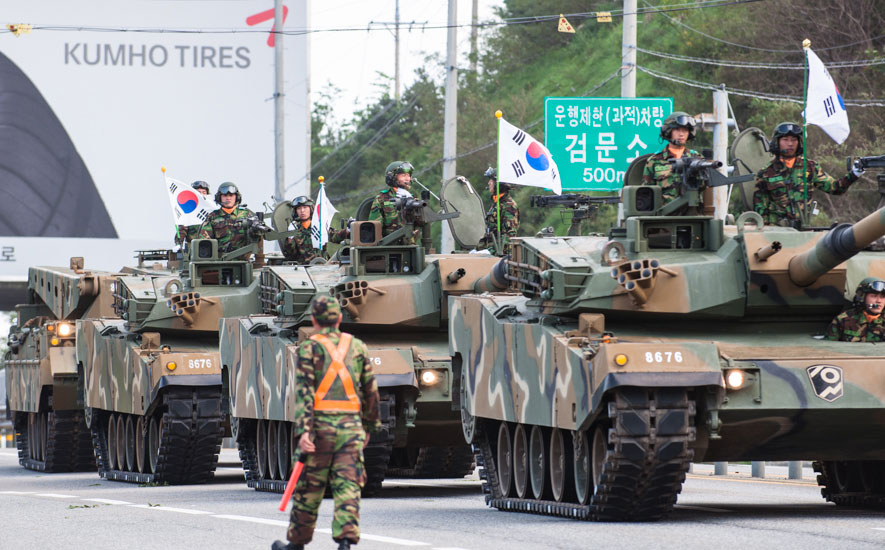 ROK tanks parade down the highway during a military exercise and parade day which celebrated a South Korean military memorial. The Army is always present in this heavily-defended area. Photo: Shannon Aston. 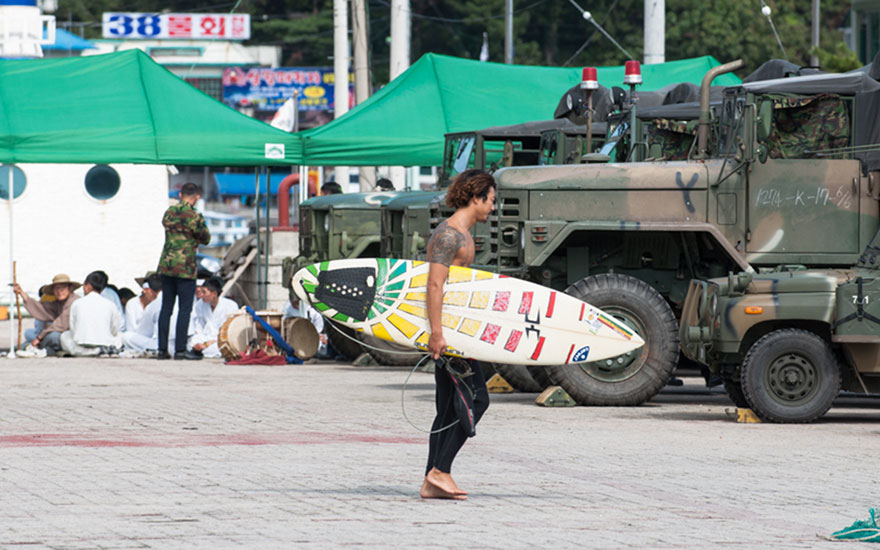 I was born in New Zealand, but I currently live in Seoul, South Korea and work as a university lecturer and a surfer. I have been working on a photo essay about surfing culture on the 38th Parallel – the demarcation line of latitude drawn up after the Korean war – on the East Coast for about two years.

I have photographed Korean and foreign surfers who have established this area as a legitimate surfing community and who now share the coastline in one of the most dangerous places on earth: the DMZ (Demilitarized Zone) dividing North and South Korea.

The community has grown rapidly amongst the local fishing community and the ever-present ROK (Republic of Korea) defense force who have vigilantly protected South Korea from the distant threat of a North Korean attack and rogue defectors since the 1950s.

38th Parallel Beach or ‘sahm-parl’ (“3 & 8” in Korean) is a beach, harbor, military base, and a highway rest stop. Weary travelers can stop for strong, sweet coffee, spicy food, and tacky souvenirs. They can also inspect and enjoy the rare beauty of the Gangwando coastline.

South Korea has caught the surf bug badly. 38th Parallel Beach has fast become a hub for Seoul’s young jet-setting surfer class. A three-hour drive from Seoul through scenic Gangwando brings you to the barbed-wire bay. On any given day, you will see trendies, hotties, gangsters, Hongdae hipsters, Gangnam DJs, and foreign English teachers all jostling for a wave.

The East Coast of Korea has some of the most consistent and powerful waves in the country. With ever-improving forecasting technology, modern social media, and South Korean connectivity, the short-lived swells which originate in the East Sea are no longer left unsurfed.

As a lifelong surfer, the mixture of this semi-remote location, exotic culture, and the three distinct groups all occupying the same area is incredible to me. I tried to spend as much time as I could out there getting my surf fix and capturing the amazing and strange things I saw at this wonderful South Korean beach.