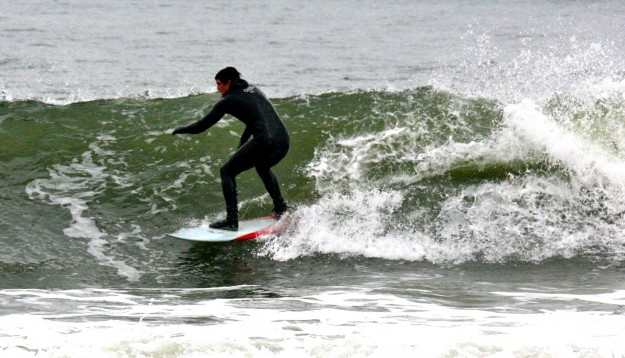 Alex Russo almost certainly surfed this weekend.  He probably hitched a ride with a friend for the drive from Maryland down to his family’s beach house in Lewes, Delaware.  He would have ridden his 5’11” Firewire unless there was a little juice in the water; if there was swell, he might have opted for his 6’5” Rusty pintail.  He probably muscled his 5’11” 170 lb. frame through the shorebreak and sat patiently next to his friend, waiting for the arrival of a set on the horizon.  If Alex sensed the crowd eagerly moving outside to greet the approaching waves, he too would have paddled further out and positioned himself close to the peak, maybe using his buddy’s hoots as motivation to take off on the biggest wave of the set.  He would have felt the glide and giddy sense of anticipation we all feel when paddling the first few strokes into a wave, and he would have gracefully taken off and felt his way down the line, reading the wave’s undulations with his body, sensing when to bleed off speed into a cutback, or sensing a steep section begging for a carve.

But he wouldn’t have seen any of this; Alex Russo is effectively blind.

Leber’s Hereditary Optic Neuropathy affects something close to 100 Americans each year and in early 2010, when he was 20 years old, it destroyed Alex’s vision.  The disease is hereditary, carried through the female line, though only rarely does it affect women. The effects come on suddenly and with little warning.  Short of obtaining a blood test to determine if you are a carrier of the gene, there is no way to know whether or not you may develop Leber’s.

Alex first noticed that something was wrong in the summer of 2009 when he had trouble seeing the ball while playing tennis. He decided to visit an eye doctor.  But after months of doctor visits, tests, and second opinions, his vision continued to deteriorate while the cause remained a mystery.

His right eye, over the course of only a few weeks, was reduced to providing mostly peripheral vision.  Then, as the disease attacked his left eye, Alex lost the ability to focus his vision entirely.  Leber’s destroys the optic nerve, which is the conduit that sends visual signals to the brain, though peripheral vision is largely unaffected.  For Alex, as is typical for many Leber’s sufferers, it took only eight weeks to lose his sight and for his entire life to change.

Alex Russo learned to surf in front of his family’s beachfront property in Delaware.  He was ten years old when his uncle, a local shaper, started pushing him into his first waves.  The bug bit, a surfer was born, and for the next decade, Alex surfed all summer long, and on wintertime weekends when his family would drive over from their year-round home in nearby Elkton, Maryland.  He lived an idyllic east coast surfer’s existence: quaint house at the beach; nephew of a local boardmaker; and when he was old enough, he earned summer cash working the stove at his family’s restaurant.

When the sandbars around Lewes weren’t working, Alex made sojourns all over the east coast, from Florida and South Carolina up to his beloved Long Beach Island, host of last September’s Quiksilver Pro contest.  His favorite surf trip was a pilgrimage to Hawaii, where he caught some of the finest waves of his life, and impressed the locals by hailing from Maryland.

He’d undoubtedly impress those locals even more now.  Lots of guys from Maryland surf—not many do so without being able to see the waves.

By the time Alex was finally diagnosed with Leber’s, in the spring of 2010, he had learned to reinvent how he performed almost all daily tasks in his life.  A criminal justice major at Towson University, he had to adjust to life as a college student without the ability to read books or jot down lecture notes in class.  He didn’t miss a beat, and is on track to graduate on time, at 22-years-old.  Though Alex is an only child, he has benefited from extremely strong family support and a friend network that has allowed him to move into this next phase of his life from a position of strength, not weakness, though a conversation with Alex quickly reveals that he needs no help in the emotional strength department.

When most of us would have cursed the gods for taking away our sight, and, we would have assumed, our ability to surf, Alex has taken his condition in a surprisingly smooth stride.  In fact, he never considered the possibility that he would not be able to surf again.  In September of 2010, only a few months after his diagnosis and after the total deterioration of his vision, Alex and a friend paddled out for a surf.  This experience could have driven home the point that if you can’t see, you can’t surf.  Not for Alex.  With his buddy giving him direction and pointers (Alex initially was paddling sideways, parallel to the waves while trying to catch one) he was able to make the necessary adjustments to surf without being able to see oncoming waves.  He positioned himself where he could rely on his peripheral vision to sense where others were lining up, and to where he could just barely make out the faint presence of an approaching set.

His description of his surfing experience will be familiar to anyone who has surfed at night under moonless skies: the sensory awareness of an incoming wave without necessarily being able to see it; relying on the feeling of a wave’s lift to know when and where to paddle; and the delicious sense of speed and freedom from surfing a wave that remains mostly invisible (Next time you paddle out, imagine that you’ve wrapped a swath of cheesecloth around your face completely obscuring your vision, with only tiny slits at the corners of your eyes permitting a slice of peripheral vision. Now you’re surfing like Alex).

Alex unsurprisingly says that surfing this way has opened up different parts of the wave.  He is enjoying learning to feel his way around a wave’s face.  He is excited about an upcoming surf trip to San Diego this winter.  He is still stoked.

“There are worse things out there.”  “Speed bump in my life.”  “People around me were more upset.”  “Roll with it.”  “I’ll never get a longboard.”  These are the sorts of statements Alex casually throws out when talking candidly about his condition.  The guy is a flat-out inspiration to anyone facing difficulty in life, surfing or otherwise.  He is a reminder of what a joy surfing is, and an example of the recuperative power it provides.  And he wants to share his optimism and contagious sense of hope with others.  With his freshman year career plans of becoming an F.B.I. agent derailed by Leber’s disease, he now hopes to help others get back in the water who have also been dealt a potentially catastrophic blow.

And he will succeed at this new plan just as he has succeeded in moving forward in his own life despite the hand he’s been dealt.  Optimism.  Hope.  Stoke.