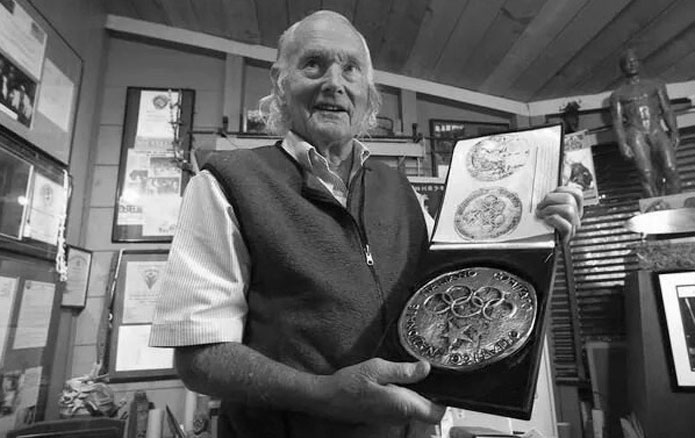 Bruce Hopping at his home in Laguna, CA. Photo: Facebook

Bruce Hopping, who works out of a small kitchen that doubles as an office in Laguna Beach, has spent more than four decades organizing surf contests and introducing water sports to third world countries. His quiet and polite demeanor is humbling, but powerful. Every day, Hopping wakes up at 10:30am. and doesn’t go to sleep until 2 or 3am. His routine resembles that of a bartender, despite being in his mid nineties. “My job requires me to communicate with people in other countries. Because of the time difference, I am only able to do that late at night.”

Hopping started the Kalos Kagathos Foundation in 1953 to connect kids with surfing as well as the culture in other countries. He has brought high school students from the U.S. to over a dozen countries including the Philippines, Indonesia, South Pacific Islands, Morocco and Russia. At 95, you would think Hopping has slowed down. He hasn’t. “Water sports are good for kids, and they are highly overlooked,” Bruce explained. “Students playing football come out with injuries that last them a lifetime. Water sports don’t destroy your body like that. They improve it. It’s important that the sports kids are playing compliment their education, not replace it.”

Born in Vietnam, Bruce’s parent’s served as Diplomats. He grew up in New Jersey, and ended up joining the Army, where he served as a pilot during WWII and joined the Navy in the 1950s. He was an avid swimmer, and eventually became the swimming coach at the Navy’s basic training center.

“Since the day I met Bruce in the early ’90s,” Hopping’s friend and advocate Pete Jenks explained, “nothing about him has changed. His voice is the same. His attitude is the same. He never takes no for an answer.” Pete owned a small surf shop in Vancouver, off the Pacific Ocean. He read an article on Bruce Hopping taking a small surf team to Vietnam. “A kid came into the shop. He saw the article sitting on the counter and said ‘I wish something like that would happen here,'” explained Pete. “I sent a letter to the newspaper about Bruce. A couple of weeks later, Bruce called me.”

His family and friends know Bruce as a generous man whose heart is in the right place. “Bruce helped me bring a group of kids from Canada to a National surfing competition in Spain. That kind of thing just didn’t happen back then. It was crazy,” said Pete. Despite numerous setbacks and battles with the school board, Hopping has managed to make huge improvements within the water sport community. He does not own a computer. His entire foundation operates off of his house phone — a quality that doesn’t seem to exist anymore. He goes down to the local newspaper when he needs to get information out.

The Kalos Kagathos Foundation organizes trips abroad and offers scholarships to aquatic athletes that can’t afford the travel. Many surfing foundations pop up yearly, but Hopping has seemed to endure despite all obvious setbacks. Bruce has become a staple at Laguna Beach aquatic sports banquets. He responded, “I started the foundation because I wanted to put athletic fitness on a pedestal, much like the Greeks did. I’m trying to perpetuate something that others had figured out long before all of us.” Coaches credit Hopping for water sports like swimming, diving, synchronized swimming, surfing, and water polo becoming more popular in schools. As Pete explained,“Whenever I got frustrated, Bruce used to tell me ‘If only you and I show up at the beach… we are going to have fun, and we are going to make history.’ That’s all I needed to hear.”