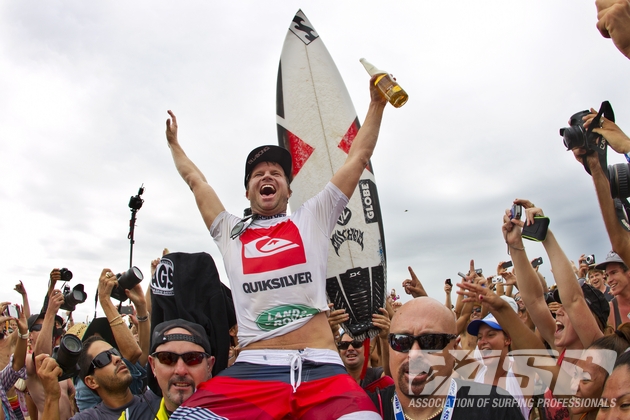 "There was a lot of weight on my shoulders in that Final so it’s pretty rewarding to come out on top,” said Burrow. Photo: ASP/Kirstin

And they’re off! In the first event of the 2012 ASP World Tour, veteran Taj Burrow registered a solid bid in his campaign to win his first World Title. Burrow defeated Adriano de Souza by the narrowest of margins in the final, and the victory seems to have energized Burrow* for the year ahead.

“I feel so good now!” Burrow said. “I had a really good event last year, but came up short in the Final against Kelly (Slater). Then today when I found myself against Adriano (De Souza), I was really nervous because he got me in a Final in Brazil last year. He’s really tough and I don’t like competing against him to be honest. There was a lot of weight on my shoulders in that Final so it’s pretty rewarding to come out on top.”

Defending 11-time World Champion Kelly Slater lost a close heat to Josh Kerr in the Quarterfinals, and was characteristically non-committal about the year ahead.

“I’m not sure if I’m going to Bells,” said Slater. I’m just going to go find some good waves in the next few weeks. Then I’ll figure out what I’m going to do for the year.” 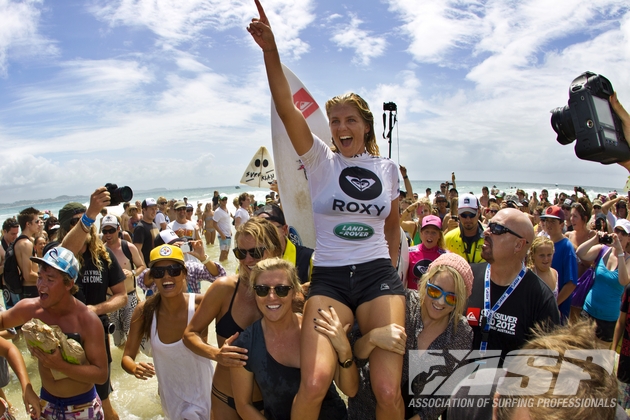 "My cheeks are so sore from smiling already,” said Steph Gilmore. Photo: ASP/Kirstin

Steph Gilmore kicked off her World Title campaign by defeated Laura Enever in the final of the Roxy Pro Gold Coast. After a confidence-rattling injury and a disappointing performance in 2011, Steph made it clear that the victory was meaningful.

“To be carried up the beach with your friends underneath you with thousands of people around has got to be one of the best feelings in the world,” Gilmore said. “It took me back to 2005 when I won here as a grom. Last year went so quickly and it felt like I didn’t even exist on the rankings and that fire wasn’t really there. This year it’s so good to have that back! My cheeks are so sore from smiling already.”

The ASP resumes competition at Bells Beach on April 3rd.

Correction Appended: An earlier version of this article misstated that Taj Burrow was a Cooly Kid; however, he is not.