But, according to reports, the Nigerian Navy under “orders from above” began forcibly evacuating Tarkwa Bay last Tuesday, destroying homes and displacing area residents. Surfers who have made the trek to Tarkwa Bay over the years, including Graves, are heartbroken by the news. 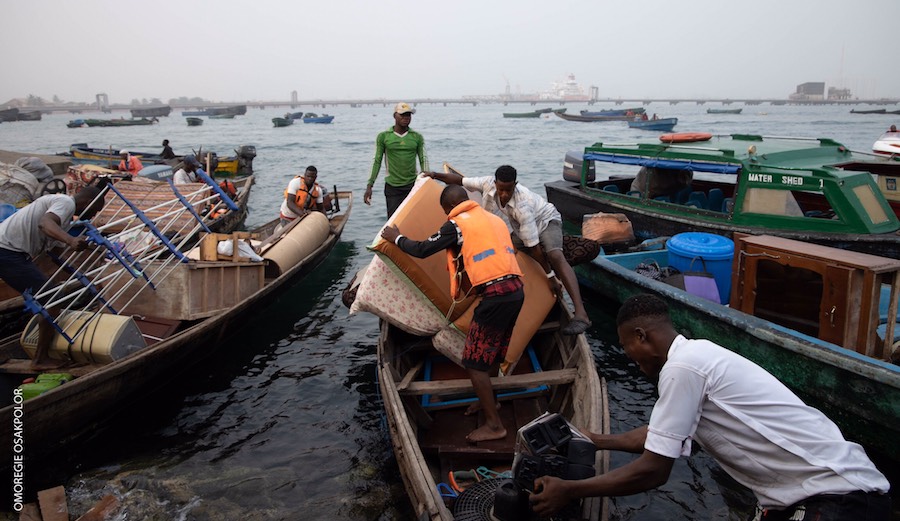 Tarkwa Bay is home to some 4,500 residents – the majority of which were forced to evacuate the community that’s only accessible by by boat. Photo: Omoregie Osakpolor/Justice and Empowerment Initiatives

“Feels really weird that this happened after we launched our episode, but hopefully this helps the cause and shows people exactly what the scene was, to hopefully help fight for a permanent solution to this scenario,” wrote Graves in an Instagram post referring to a crowdfunding effort started to assist the community.

Tarkwa Bay is among at least two dozen beachside communities that have fallen victim to forced evictions since December in an operation Nigerian officials claim is meant to root out oil theft along coastal pipelines.

“We found at least 300 illegal spots and dug out pits where oil products were being tapped and sold illegally, even to neighboring countries,” Navy Commander Thomas Otuji, a spokesman for the operation, told CNN.

As many of you have heard the Nigerian Navy has evacuated the man made island of Tarkwa Bay leaving most of all who lived there homeless. As of now @iamsickrabbit has shared a link ( in bio ) with me if anyone feels like donating to helping them relocate/find new homes. They are currently trying to find the best solution to the events that have transpired. Feels really weird that this happened after we launched our episode, but hopefully this helps the cause and shows people exactly what the scene was, to hopefully help fight for a permanent solution to this scenario. Thank you to all who have reached out after hearing the news and I will reach out again once I have more info 📷 @olihillyer_riley

“They have been there doing all sorts of illegalities,” Otuji continued. “This is dangerous for people to be living in these areas with oil pipelines. What else can we do but to make sure that we salvage the situation?”

Human rights groups, however, are up in arms and in the case of Tarkwa Bay claim there’s an ulterior motive.

“We are dismayed by the purported justification given for these forced evictions based on security operations, knowing that no law in Nigeria allows for the demolition of peoples’ homes nor other forms of collective punishment without any due process of law,” explained Justice and Empowerment Initiatives – Nigeria in a joint press release with Nigerian Slum/Informal Settlement Federation.

The groups say the evictions at Tarkwa Bay appear to be in direct relation to efforts to build a new resort there.

“We are alarmed by the subsequent revelations that the Lagos State Government and Nigerian Ports Authority (NPA) will actually be beneficiaries of these forced evictions… while the people displaced suffer untold hardships,” the groups write. “The Lagos State Government on 23 January 2020 announced its intention to develop an elite-focused tourist resort at Tarkwa Bay… without any regard for the rights to participation in such [a project] by the affected community.”

According to CNN, back in 2016, Nigerian officials displaced more than 30,000 families in the seaside fishing village of Otodo Gbame and destroyed their homes. And despite a court ruling that the state government should resettle the area, many remain homeless.