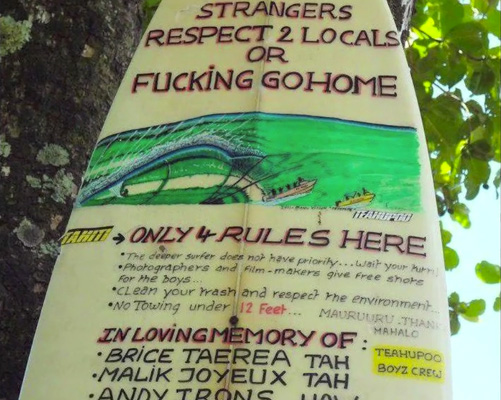 While bodyboarding at Sapinus last May, a group of local Tahitians were overpowered by pro surfers with jet skis who wished to tow in. There was no ask, no “may we join,” nothing. For the men on the skis, it was show up and get whatever wave you wanted. Not the most respectful ways to go about surfing. John Duval, one of the locals, had enough after an hour of waiting for a wave. He stroked into one, the same wave that Dave Wassel was towed into by his partner. The two had a verbal exchange, the contents of which can partly be found in this video.

One local asserts that if the waves are able to be paddled into, skis should not be allowed at the break. There’s sound logic in that on multiple levels and even a sign that clearly states it. Sit back, enjoy the bits of GoPro footage and let us know what you think below regarding the issues at play in this video.

Check out the other side to this video, from Dave Wassel’s perspective, here.