Thanks for the Waves 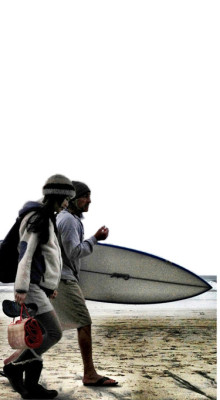 Every Thanksgiving, our family ends up on a beach walk. It’s either a pre-meal morning walk to get ready for the feast ahead, or a post-meal walk-it-off stroll. It’s always done to coincide with a negative tide when the beach is massive. And, for as long as I can remember, every Thanksgiving has included a sizable swell hitting the Southern California coast.

Every year we’ve had waves. Not just ok waves…we’ve been blessed with all-time swells.

I woke up early this morning and did the routine, before-your-feet-hit-the-floor surf check. Surfline used a phrase I haven’t seen before. Maybe they have used it before, but I’ve never noticed it. It felt like salt in the wounds since we’ve been without waves for what seems like months.

As if “Poor” isn’t descriptive enough.

I get it, we’re all a bit amped up because we haven’t had waves for a long time. I also applaud their point. It’s not just poor. It’s worse than that. It reminds me of hearing sports commentators trying so hard for another way to say a team beat another. “The Lakers atomized the Spurs last night.”

This all brings me to the title of this blog.

When one is without what he loves, he appreciates it more.

The phrase “absence makes the heart grow fonder” has been around since Roman times.

So this year, the year we have no waves hitting the Southern California continental shelf, I’m thankful.

I’m thankful for the many Thanksgiving sessions I’ve had in years past.

I’m thankful for the ocean water being as clean as it is and for the tireless work volunteers who have contributed to keep it that way.

I’m thankful for the fact that I can walk down to the beach and surf–that my beach access hasn’t been taken away like it has in most of Maine, parts of Long Island and at Martin’s Beach in Northern California.

I’m thankful for the freedom we have in the United States, and how that enables many of us to travel extensively to sample waves all over the globe.

I’m thankful for every shaper in the world, endlessly experimenting to help us get even more joy from gliding on water.

I’m also thankful for my family, whom I’ll walk the beach with tomorrow and, for once, not look at the waves.

Happy Thanksgiving everyone. Whether you’re at a beach or not, have access to waves or not, take a moment to take stock of the countless blessings you’ve been granted.

Check out more of Jim’s writing on his blog and let us know what you’re thankful for below.