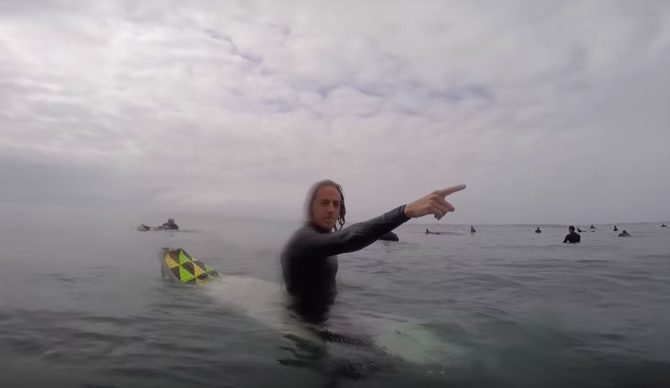 A 180-pound guy threatened to beat the shit out of me the other day, and then in a sputtering and redundant coda, “to kick my fucking ass.” I was surfing at Sharks and a fat, middle-aged man paddled up to me, grabbed my board, and started screaming, “You can’t do that! You can’t do that!” Befuddled, I said, “What? What did I do?” He got way up in my face, splashed me with water (ow, ow!), and accused me of dropping in on him, wiping out, and then spitting out my board.

I didn’t realize I’d dropped in on him, but if I did, and if I shot my board out, I totally deserve to be yelled at and mortified into the day before eternity. But threatening to beat the shit out of me? This kind of thing happens in the lineup, of course, but I was frankly shocked to have that out-of-control anger directed at accommodating, smiling, let’s-keep-the-vibe-mellow me. I was also genuinely curious about how this ass kicking would happen, and seriously wanted to ask him whether he was planning to do it in the water, or if he’d ask me to paddle into that little patch of sand that’s available near the cliffs at lower tides.

The fact is that I was not even slightly afraid. I could be so unconcerned because I was surrounded by a bunch of other (male) surfers who would never in a thousand years let this happen. I shrugged and said to Purple-faced Screaming Guy, “Well, I guess that wouldn’t be hard, since I weigh like 95 pounds.”

You see the same kind of uncontrolled rage online. Sometimes these angry online responses are deserved, just like I deserved to be berated for dropping in on the guy, if that’s what I did. But he blew his entire life savings of justified moral outrage by threatening to kick my ass. When he paddled up to a group of other guys to complain about me, they turned their backs, and one said, “You can’t beat up a girl, dude.”

Similarly, I’m pretty sure spewing online vitriol and heaving death wishes at those who have wronged you isn’t going to help much. Offensive people are often unfairly protected by their privilege and position, just like I was protected by my gender and size. But threatening physical harm squanders any righteousness—earned or not—and people are just going to look at you like, you need to chill, bro.