The 10 Most Outlandish Ways People Have Been Surfing Waves 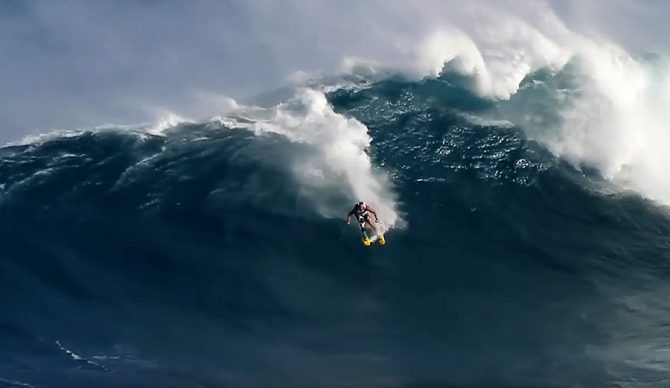 Yes, this is a dude skiing down the face of a wave at Jaws – Chuck Patterson, to be exact. Technically that’d qualify as surfing. And it definitely qualifies as outlandish.

Unconventional surfing is so hot these days. The cool kids are losing their fins, leaping from exposed rocks and even the occasional floating dock in lieu of paddling into waves like our ancestors used to do. Swapping out actual surfboards for anything that floats is even en vogue these days. All this innovation either makes for amazing style or some fine entertainment.

Here’s an incomplete list of the wackiest, wildest, novelty ways to ride waves. These are the most creative stunts, the most wonderfully preposterous ideas, and the avant-garde surfers redefining the game. Some of these are pure beauty and others are gimmicks so absurd that they can hardly be called surfing. No matter what, they’re all worth a watch.

Turns out, you can get shacked out of your mind on a minuscule skimboard. Well, at least Brad Domke can. Domke got both love and hate for this when he started charging big barrels on skimboards. No matter what anybody says, though, the guy is next level.

Jamie O’Brien’s stunt repertoire could easily make up this entire list. This is just one of his best (and stupidest). “We had no right to be out there,” he says. “Two of us in speedos on a hot pink board at12-foot Pipeline with backwash…probably the stupidest idea of WhoIsJOB 5.0.”

Hats off for inventing a viable, albeit rather sketchy, way to avoid paddling for waves. This looks like a blast.

Mason Ho has spectacular talent and has zero f*cks give. Here he is nonchalantly weaving through some exposed rocks like only Mason Ho could be found doing.

Ryan Burch is the king of creative shaping and his skill is certainly ample to showcase his work. Frankly, I’m amazed by everything this guy does. Here he is shredding on one of his simpler designs: a rectangular chunk of foam.

Kai Lenny might be God. There’s really nothing gimmicky about this, it’s just amazing. Here he is launching off of a roaring Jaws set wave.

Alaias are not easy to ride, but Noa Ginella does it beautifully. This is the epitome of simplicity, tradition, and radical style. The novelty of it all is that it’s going down under the moon.

Chuck Patterson charges mountains of both the land and water varieties. Here he is mixing up the two.

Who needs a surfboard? Props for repurposing waste.