The Adventure of a Lifetime: I Paddled From Canada to Mexico 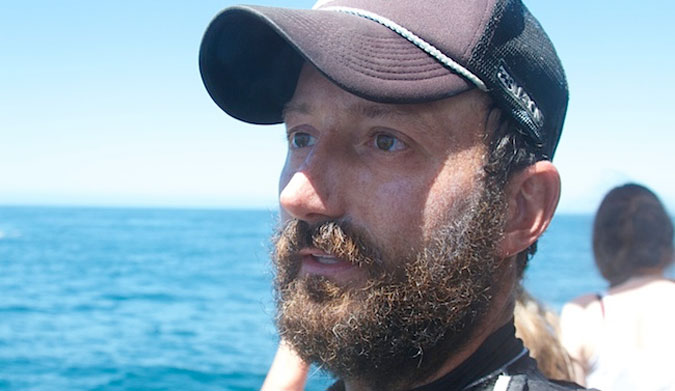 Will Schmidt: “The ocean inspires me to push my mind and body further than I ever thought was possible.”

Before I get started, I have to admit, I never dreamed that my obsession with the ocean would bring me to where I am today. A brutal history, the right timing, and the fastest growing sport in the world have combined to bring a purpose and vindication to my life. Aloha! I am Will Schmidt. Former United States Marine, advocate and survivor of debilitating anxiety and depression, and a pioneer of open ocean, long distance and endurance stand up paddling.

My journey began when I became one of the few athletes to solo stand up paddle the Catalina Channel of Southern California from Avalon, Catalina to Dana Point, CA, a route that I have now soloed three times. A 225 mile consecutive effort through the inner five California Channel Islands was soon to follow. It is interesting to look back before any of these feats became possible, to the day that I decided to end my own life.

My battle with depression and anxiety came long before military service. Long before physical symptoms arose. Longer still before anyone knew of my suffering. I won’t delve into that story too terribly much at this time, but the point I am making is that the ocean and its healing qualities granted me a second lease on life. It inspires me to push my mind and body further than I ever thought was possible.

Fast forward to this past summer. In late May, I set off on the adventure of my lifetime (so far). After a significant amount of preparation and training, I navigated a SIC F-16 stand up paddleboard solo and largely unassisted from Neah Bay, WA to Swiftsure Bank in the Strait of Juan de Fuca (Canadian/US border). Then I paddled south 1386 miles to the USA/Mexico border fence in Border Field State Park, Imperial Beach, CA. The voyage lasted 61 days total, 58 of which were spent on the water. I surfed to the shore and touched down at the Mexican border fence at approximately 6:45pm on Saturday, July 26th, 2014.

When people listen to me speak about my adventures, Canada to Mexico in particular, I normally receive a deer in headlights look and comments with the words “crazy” or “death wish” intermingled between. I am offended and vindicated all at the same time. I explain that adventurous, prepared, and skilled can be misconstrued as crazy to the naïve eye. I do not have a death wish at all. It is more like a “life wish.”It may sound cliché to repeat the old adage, “everybody dies, but not everyone really lives.” After all of my barefoot, wetsuit clad expeditions, I may not skid into my grave with all ten toes intact, but I’ll do it with absolutely no regrets. 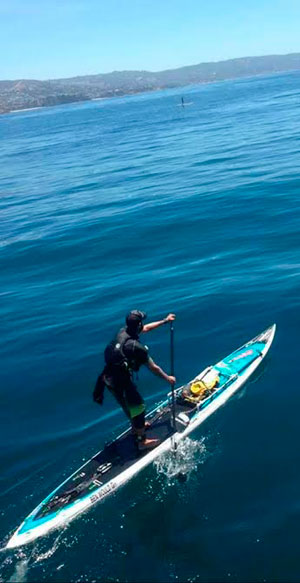 At least once every day I thought to myself, “this is the greatest idea I’ve ever had” which was usually closely followed by, “what the hell was I thinking!”

On my latest undertaking, I encountered a peppering of every type of weather and ocean condition that the coast could throw at me. I invented new and interesting ways to eject myself from a paddle board. I experienced more great highs immediately followed by extreme lows than I can remember. At least once every day I thought to myself, “this is the greatest idea I’ve ever had” which was usually closely followed by, “what the hell was I thinking!” I have been dragged by my leash across razor clam reefs, suffered near drowning on multiple occasions, slept in sea caves during low tides, and took poundings and crushing blows on shore breaks during beach landings.

Each coast line presented its own unique set of challenges. The Washington coast proved to be very desolate and sparsely inhabited. More provisions had to tag along for the ride, and the weather was super fickle which made carting along the extra sixty pounds slightly more challenging. Oregon was a minefield of rocks, reefs, and river bars. It was very easy to lose focus on such a straight line of coast and end up getting sucked into the ebb and flow of one of the multiple dangerous bars. It isn’t called the Graveyard of the Pacific just for kicks. While I traversed the Washington and Oregon coast completely solo and unassisted by any means (boat, car, etc) the California coastal portion of this trip saw my mother and 88-year-old grandmother driving across the country from the Midwest to escort me from the shore. Navigation now had to include coinciding drop off and pick up points to resupply, keep safe, and check in. I became an expert at Google Map plot charting, and my mother quickly learned how to calculate twelve digit grid points to place herself at my location when I was out of communication range and she only had my EPIRB to find me.

It is tough to explain the feeling I had on the last day of the trip. Launching from La Jolla Shores in San Diego, CA and pushing the final 28 miles to the border fence was a grueling task by itself. I took a wind shear off the point of La Jolla as well as Point Loma from completely different angles. I linked up with friends who filmed and photographed from a privately owned sailboat while helping me navigate out of the kelp line that extended around the bay from over a mile offshore. The Coast Guard, Border Patrol, and State Parks Department all had to be informed that our bearing was the Tijuana border fence and approved of the heading.  The border fence extends roughly 30 yards into the ocean, and is surrounded by submerged concrete ballast that kicks up the surf and prevents anyone from trying to cross around it. I planned my landing about 100 yards north of the fence and ran the remaining distance on the beach with the board overhead.

I continue to raise funds and awareness for anxiety, depression, PTSD, and traumatic brain injury awareness and treatment through stand up paddle and ocean adventure. My website, AreYouInspiredYet.com , is a central hub where fans and philanthropists alike can visit to place donations, purchase swag, read about my current and upcoming events, and connect with me by filling out the contact forms provided or adding me on Facebook and other social media. There are links to documentary films that I have made showcasing past expeditions and fun music videos of my daily activities. A documentary film is in the works at this very time for the Canada to Mexico trip, so keep your ears perked for news on that!