The Banyak Islands and a 45 ft Island Hopper 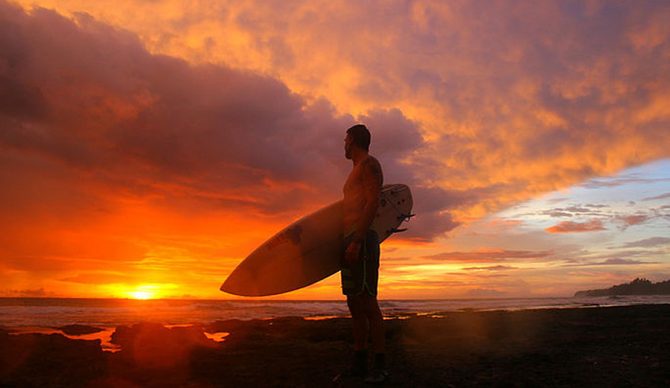 It’s 3:30 AM and I’m lost in sleepy oblivion bumping through the southern villages of Simeulue Island, 150kms west of Sumatra. Our overloaded minivan pulls into a dark muddy road in the town of Sinabang. I carry my board and rucksack along the rickety, creaking jetty that leads to our surf charter, trying not to upset the rotten wooden planks. The 45 ft aluminum twin engine, strike and score island hopper looked solid, and in this land of uncertainty, I was pretty happy about that. We pulled out of the harbor in the pitch black of a new moon with little more than the low lights of the town’s fish farm pontoons as our reference points, but with a little intuition from our young Hawaiian captain we were soon out into the ocean currents.

The sky began to ease out of the clutches of darkness through a spectrum of blue, revealing the Indian ocean in all directions. I awoke from a stolen hour’s sleep to the skipper skillfully surfing the hull of the charter down the faces of the ocean rollers which silently crept up on our stern. The Banyak islands slowly rose from the sea as a black line, gently melting into a rim of green, releasing the details of hazy wave spray around the western inlets. Eventually the peeling white caps of the breaking swell could be seen below dense green hills, rolling over the island extent. We were aiming for an uninhabited ecological paradise and turtle sanctuary, home only to a handful of rangers who camp on the jungle clad rock to ward off turtle egg poachers. “That spot is called Cobras.” My eyes were drawn into the distance by the captain’s nod. A heavy left hand point break had come into view beyond the leafy green walls of volcanic rock. “It’s called that because the headland is stuffed full of the things…” The potential for tiger sharks patrolling the Indonesian reefs suddenly seemed a reasonable compromise.

To the South of Cobras, around the headland lay Treasure Island, a right hand wave that peels along a jagged reef. The wave used to be much longer, but the tectonic release along the eastern pacific plate margin which caused the 2004 Asian tsunami uplifted the Indonesian side of the plate, causing many of the reefs around Simeulue to now sit unnaturally high in the water. In the case of Treasure Island, it decoupled the first part of the point break from the second, shortening the wave. Legend has it that the wave was one of the best in Indonesia prior to the earthquake.

We rounded the headland to find a vast horse-shoe bay, dotted with the characteristic white horses of multiple breaking waves around its perimeter. Treasure Island was directly in front of us. We anchored 200 meters off the reef, just in time to see a set of larger waves roll in and throw clean blue curtains into the white water of the reef shelf, peeling neatly toward us. Adrenaline began to pump rhythmically from my chest. Hollow waves breaking onto reef has always been on the limit of my ability as a surfer. I pulled on my neoprene vest and jumped in. Fixing my gaze on the clean shoulders of water I began methodically analyzing the break for take off position, hazards and onshore markers, my body on autopilot rubbing warm water surf wax in circular motions onto the epoxy shortboard balancing on my legs. The tender cut through the calm, blue amphitheater out to the edge of the break. I paused for a moment, took a breath and dove into the warm ocean. We had arrived.

The Indonesian sun punished my shoulders, reminding me of my Northern European heritage, but eventually the inferno dropped below the headland and streaks of blood-red and orange light began to litter the sky. That golden hour has always been my favorite time of day during my tropical travels. Almost as if the world is rewarding the onlooker for surviving the inhumane ravages of the day. A quite respectful nod from Mother Nature and the maternal encouragement that is required to go through the whole ordeal again tomorrow.

We boarded the Mahi Mahi as the light relinquished its grip on the day and found a quiet place on the boat to rest our tired shoulders and reflect whilst the captain pulled anchor to sail further into the calmer waters of the bay. Here we would sleep, protected from wind and swell, close enough to hear the intriguing bird-calls from the dense island canopy, but far enough to be bothered only by the most adventurous of mosquitoes. I came to rest on the open top deck of the charter, looking up, deep into the universe. I’ve always felt that gazing at the stars has an unrivaled power to revolutionize the way we live. The framing of our vast insignificance and the enormous privilege of life leads to profound conversations with fellow voyeurs and indeed with ourselves. My eyelids drifted slowly to rest below a skyscape of wonder and possibility, stimulated only by periodic shooting streaks of star dust. Perhaps one of the rarer moments, when the impending dream is only likely to disappoint.

I awoke to find the swell had picked up, sending double overhead set waves crashing into Treasure Island. A little further round the bay was another reef break called Minis. The waves would have to wrap around the bay, spreading the energy before they broke at Minis, reducing the swell size to something resembling my comfort zone. I sat in the crystal clear blue water, looking out towards the incoming lines of swell. I could see mounds of reef below my dangling feet and colorful blobs of fish, blurred by the refraction of the water, swimming peacefully and unaware. Way out in the bay I could see two shallow bows of moving water being teased upwards by a stranded reef, characteristic of a set. Settling my chest onto the board I took three or four relaxed strokes towards them. I could see that my position was good, the peak of the ellipse heading straight towards me and the face slowly rising up out of the blue. Sitting up on my board and shifting my weight to the tail, my right hand stroking the water to pivot myself round into position. The wave, closing fast, was starting to froth at the peak to my right. Arching my back, I stroked hard; once, twice, angling the nose of my board to the right as I felt the push of the wave at my feet. One more stoke as the tail of my board rose steeply up and forward, the familiar surge in energy that fuels every surfer’s return to the beach. In one smooth movement my hips dropped forward and down and my feet connected with the waxy top. I let go of the board, rotating my left shoulder clockwise towards the unbroken face of the wave to make a smooth bottom turn. Everything goes quiet. The board balancing on the rail, cutting into the blue face of water stretching out in front of me. How am I here? How is this perfect arc of energy letting me do this? Those fleeting seconds, feeding off third hand solar energy, owning a perspective and an experience which is yours alone, never to be repeated and impossible to fully describe or explain, is for me, the surfing addiction.

Down to my left something stole my attention. The mottled oranges and yellows of the reef had become increasingly clear. Rough circular pools of water were pulling into the toe of the wave, revealing shards of brown coral grinning up at me. The reef was being sucked dry. An internal dialog began to scream to me not to fall. My muscles tensed as my eyes searched for a way out of the wave, causing me to lose balance. My arms flailed and I instinctively crouched and leaned forward, urging the wave in front of me to be kind. The board sped up under my feet and I was spat out onto the shoulder. I slowed quickly as the wave dissipated and fell ungraciously into the water, coming to the surface on my back. I let out a breath and cracked a smile up at the blue sky as a surge of endorphins flooded my body.

Eventually our time in the Banyaks came to an end. The winds and currents were such that our crossing back to mainland Simeulue would be uncharacteristically rough, this was supposed to be the doldrums after all. The vessel lurched up on one wave to come thundering down on the brow of the next, sending shockwaves through the aluminum hull. It was enough to ensure a sea burial of my sunglasses, which decided to emancipate themselves from the top of my head and dive overboard. Thankfully for me, I did not have the same trouble with my lunch. Despite our crossing, there was time for one last surf on the southern tip of Simeulue. We pulled up to a left hand break dubbed Thailands, which was peeling for a significant distance along the side of a reef shelf. The set waves were significantly bigger than anything I had caught in my humble surfing career. The biggest wave of the session had to have been the biggest wall of water I have ever been up close and personal with. I was sitting off the right of the main breaking peak when a big dark lump appeared on the horizon. It was more menacing than anything I had seen that day and so I decided not to take a chance. I put my head down and sprint paddled diagonally away from the break zone towards the reef edge. The wall rose and rose but I had done enough. Out in front and to the left of me, the dark blue wave face spat out and over into the truck sized void. I was picked up by the enormous shoulder of water only to see down to my left one of my new friends caught head on to the breaking wave. I sat up on my board as the offshore wind caught the spray from the breaking wave, raining down droplets onto the smooth, calm backside. Riding a surge of exhilaration whilst watching a monster from behind, cleaning-up the entire group of surfers who had not played devil’s advocate as readily as I.

During the session that followed I wrestled with some of the biggest waves I had ever surfed. Big friendly giants of water. Dream catchers and dream creators. Waves to sooth the soul and satisfy, at least for a little while the surfer’s desire to prod at our insecurities in Mother Nature’s most unpredictable arena.