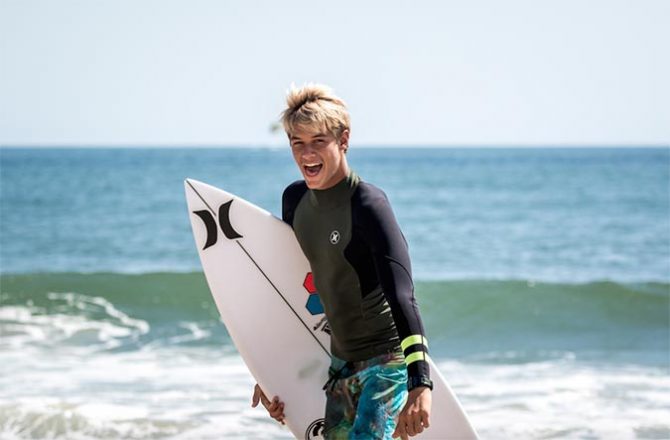 By all accounts, it was a beautiful day on the island of Barbados. The azure waters of the Caribbean sparkled a brilliant blue. The wind blew lightly offshore, sucking back out to sea to join Hurricane Irma, a powerful storm passing miles to the north that still managed to bless the island with swell. The sun-kissed surf, not quite as big as expected but still six to eight feet, was detonating in perfect barrels over the live, coral reef of “Box by Box,” a rocky, sheltered setup just north of Soup Bowls on the island’s eastern coast.

Zander Venezia had surfed conditions like this before. According to friends and coaches, he was well within his limits to be out on such a day. He’d just won the Rip Curl Search in the Outer Banks. At 16 and born into a surfing family, Zander Venezia could handle himself in critical surf.

And he rode with his usual fluidity and poise, pulling into several beautiful barrels over the course of four hours on a near-perfect day. He reportedly told Dylan Graves that he’d caught the best wave of his life. Graves had just hooked up with Nathan Florence, Balaram Stack, and Nate Behl for this particular swell, one they’d been watching develop.

“I met Zander in the water at Soup Bowls during a fun, warm-up session the day before,” Florence told The Inertia. “He was out with all his buddies and his dad.”

That day in Barbados wasn’t heavy says Florence, who also works with the Big Wave Risk Assessment Group, just super fun and the conditions were “as good as it gets.” Zander had told his friends he was heading in.

“I was on my way in (too), riding whitewater when I saw a broken board floating, then it jerked into a ‘tombstoning’ position with nobody popping up,” Florence says. “I’d seen that before and really hoped the leash was stuck on the reef but started paddling towards it as fast as possible anyway. Waves went over it and the current pulled it out past the break line. At this point, I knew something was very wrong.” 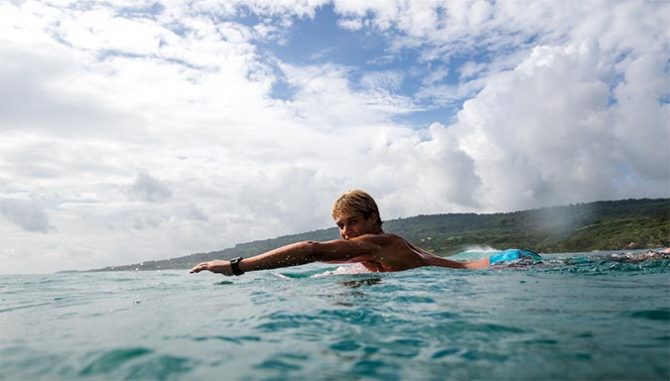 “You see kids be so competitive, and you kind of have to be that way to be a superstar, but Zander was way more cruisy.”

Son of the Island

Zander Venezia was a son of Barbados. His open, sincere demeanor had literally endeared him to the entire island since he was a child. His father, Louis was from Florida, but moved with Zander’s mother, Lisa, to Barbados to raise their children (Zander has an older sister, Bella). Lisa was raised on the island.

Louis taught and coached his young son during his surfing career and was extremely connected in the greater surfing world. “Louis has always been a really good surfer,” says Hurley’s Asher Nolan, who sponsored Zander when he was 12. “He’d do some announcing for the Barbados Pro and Independence Pro, annual events that he put on. The last few years he’s been helping the WSL with its junior pro and WQS events. He’s always been really involved and super knowledgeable.”

And with the help of his dad, who he had surfed with since he was a young boy, Zander was coming into his own as a competitor. But he did it with a class that defied his years, says his friends, always competitive while staying playful, and never too serious. “Zander was starting to make a name for himself and was really driven but he wasn’t a bad sport,” says Nolan. “He had fun and was never pissed off. You see some kids so competitive, and you kind of have to be that way to be a superstar, but Zander was way more cruisy.”

Easy to be around, Zander excelled in school and cared for his community, helping out annually at a local event for disabled kids hosted by the children’s charity, Variety, where the young surfer would take time to paddle physically challenged children out into the water. “Zander was one of most helpful kids out there,” says Andrew Rapson, a local shaper whose son was friends with Zander. “He was one of the last ones to leave.”

The young, handsome goofy-foot was friends with whomever he met, it seemed.

“Everybody that runs surf events knows you have one-sized jerseys,” says Surfing USA’s Greg Cruse. “Little kids tie three knots in the back to make them fit. But our jersey makers made a bunch in different sizes. None of the kids even noticed, they just put them on and went. Zander was like, ‘Wow, this jersey fits me; I’m so stoked.’ He genuinely showed appreciation for that little effort by our team. It was pretty typical of the kind of kid he was.” 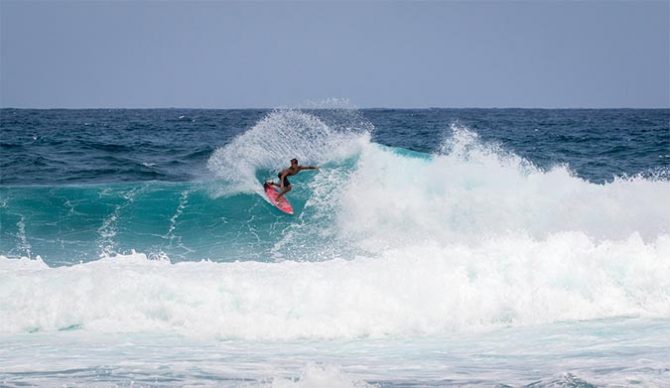 Zander had worked his way up to surfing giant Soup Bowls, according to friends, taking off on bigger and bigger waves.

Nathan Florence had already caught several exceptionally fun waves when he noticed the board “tombstoning” in the surf. That’s when instincts kicked in.

“I got to the board, dove under, grabbing the leash and pulling Zander up unconscious with a solid cut in the back of his head,” Florence said. “From there, Balaram helped to get him onto our shortboards and we started CPR as best we could. Daniel Russo got there next, and he had fins on which helped a ton. Soon everybody was there and putting in all the help they could to get him in. It just took a long time, we were fighting the current and had to wait for sets for fear of losing him.”

By all accounts, Zander didn’t run into trouble after surfing a wave. Box by Box is a gorgeous setup. Locals have compared it to right-hand barrels in the Mentawais or Maldives. But the wave at Box by Box ends on a dangerous rock shelf, and surfers have to exit the barrel before the wave mushes out on the ledge. That’s usually okay, as surfers make the turn on the kick out and head back out to sea, paddling with momentum.

But Zander was trying to get to the beach. “I thought he caught a wave straight in,” says Nolan, who had just paddled out after shooting photos from the water. “Then Nathan started yelling.”

Zander had apparently ended up directly over that shallow, sharp ledge and when he saw a set coming he paddled back out to duck dive under it. When the waves detonated, he was slammed against the coral. He was essentially killed attempting a duck dive.

“Eventually a lull came long enough for Russo to get him halfway and some waves pushed us the rest of the way in,” says Florence. “We got him up the beach and continued CPR. Everyone was there shouting encouragement and doing what they could to help. Literally, each person did the best they could for Zander, including his dad who kept his composure through some very scary stuff and did the absolute most he could for his son. It was just a very bad combination of events and location. We tried our hardest for Zander, but some things, in the end, are out of our control.”

Zander Venezia was pronounced dead after being transported to the hospital.

@zandervenezia By all accounts you were as good a friend as you were a surfer…thank you for the impact you had on those around you for a life lived with joy and purpose. And thank you for taking this photo with me when you were 5. I will cherish it always. @louis_venezia sorry doesn’t cover it. Words cannot suffice for your family and the loss of a son. The grief felt by so many is felt around this surfing work of ours. Much love to my #BarbadosFamily. #GoneTooSoon #ZanderVenezia •For those who don’t know, Zander passed away while surfing today after catching what he said was the best wave of his life. He was knocked unconscious when he hit his head on the reef, possibly braking his neck and taking a long hold down for a number of waves. Friends and fellow surfers aided in a rescue attempt but his injuries were greater than could be addressed making him the first victim, by default, of #HurricaneIrma.

The death of Zander Venezia has rocked the island. He was a beautiful soul some have compared with Jay Moriarity, Santa Cruz’s passionate big-wave son who died in a random freediving accident. When wonderful people die, communities are hit that much harder.

“The island is small so it’s as if everyone there lost a brother, child, or family member,” says Kelly Slater, who knew the elder Venezia and had bonded with Zander when he was a young grom. “It’s so heartbreaking to watch that happen to them all.”

And when people die in the midst of chasing a pursuit they’re passionate about, the questions inevitably come after: What can we learn from this? What could we have done differently?

The absolute truth is that this was a completely random accident. “If he had turned to paddle to the beach (instead of trying to duck dive), he may still be with us,” says Rapson. “We never imagined that this was possible.”

Box by Box is undoubtedly a dangerous wave. According to Rapson, Cory Lopez had hit his head hard on the reef years before, but he was plugging himself deep within the barrel. And the spot doesn’t break that often—only on specific east/northeast swells—so local knowledge doesn’t run super deep. This certainly woke the community up to the dangers of the place

But on that particular day, Zander looked comfortable. According to his friends, he was even surfing conservatively. “He was out there for four hours,” says Nolan. “He was pretty calculated too, taking off in the right spots, not getting super worked, not getting crazy ones where people were eating crap. I really feel for Louis. They went on trips together, all the contests. Louis lost his best friend.”

Editor’s Note: The Barbados community has started a #LiveLikeZander hashtag to remember their fallen son.