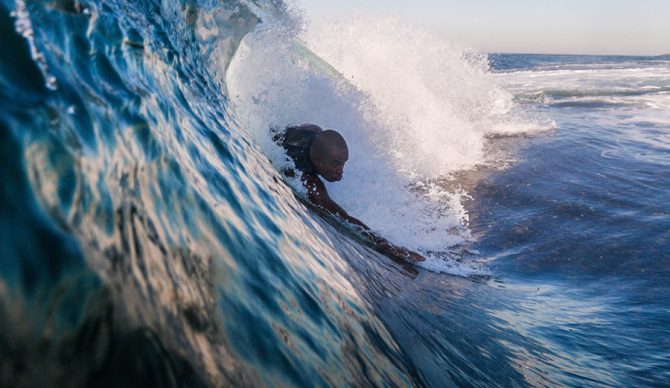 Local charger JC Rodriguez. Note the water surface sucking down off the slab.

Following the qualifying rounds of the 2017 Itacoa Legends, the “World Cup of Bodysurfing,”JC Rodriguez organized a trip to the ironically-named “Shorebreak” — a super-sucky slab way outside of Copacabana Beach.

“Shorebreak” sits at the end of an off-limits military fortification extending out along a granite peninsula, so the only way to get there is to swim. A group of eleven bodysurfers met that morning and paddled 25 minutes out to the spot — a slab that is absolutely gnarly. The way the water sucks off the convex granite dome underwater made me cringe every time someone jumped on a wave. There was so little room for error. It wasn’t big, but it was burly. I couldn’t believe it as I watched JC Rodriquez tuck into the barrel over less than a foot of water. Several guys came out with bloody claw marks in their skin and wetsuits from the bottom. Yet they were all smiles.

The camaraderie of the trip to the slab was extraordinary. It would have been worth paddling out there just for the sweeping view of Rio, but to do it with all these new bodysurfing friends was truly special. Everyone was hooting each other on, joking around, and totally stoked to be charging en masse. After the sesh, we swam over to Devils’ Beach, an extremely pretty (and military-restricted, thus empty) pocket beach tucked between Copacabana and Ipanema. From there, we walked down the beach to Arpoador, on the South end of Ipanema.

The crew had breakfast and a beer. It was here that I really started to contemplate the fact that the group of bodysurfers assembled for Legends 2017 seemed to be made of extraordinary people. The waitress made a mistake on our bill, and the locals insisted on paying it. When people came up begging for food, the guys would go buy stuff for them. Photographer Fernando Amorim offered to borrow his Mom’s car so he could drive us up the mountain for a view of Rio. All big-hearted people. Mostly, I was really blown away by the fact that the Brazilians — once again — completely embraced us bodysurfers visiting from other countries. They rolled out the red carpet, instantly bringing us into their body surfing family. Every bodysurfer should make a pilgrimage to Rio. This is where the heart of our sport resides.

The other big lay-day event of Itacoa Legends was a group trip to work on cutting-edge hydrodynamic techniques in — of all places – a swimming pool. It should be noted, though, that this spectacular Olympic pool on Botafogo Bay was possibly the most scenic pool any of us had ever seen.

JSC Mauricio, the organizer of the pool clinic, is a jujitsu expert and veteran Rio bodysurfer. A few years back, he found himself land-locked in Germany. He became fascinated with fin swimming, a sub-culture of athletes that push the limits of underwater hydrodynamics. By studying fin swimming technique, Mauricio came to see that bodysurfers can significantly improve their speed by applying the same principles in the ocean. Starting with an underwater takeoff, bodysurfers can launch much earlier, ideally, beating surfboards to the punch. Once trimming, the rider moves faster through barrels and sections and can whip off spins without losing momentum. 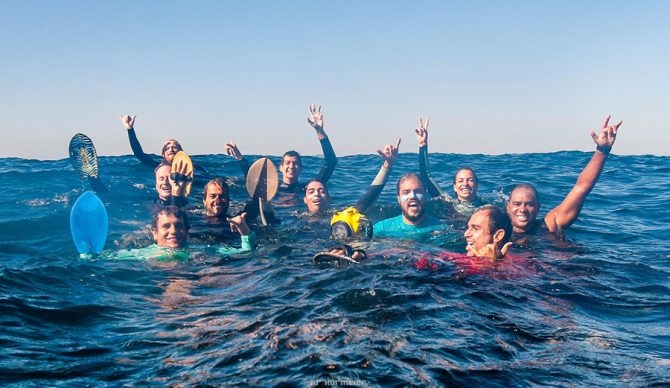 Armed with a newfound understanding of hydrodynamics, Mauricio launched a new concept in fin design. In conjunction with his newest pursuit, Mauricio has developed a rigorous set of training drills that he is guiding bodysurfers through to push the limits of the sport. On this particular lay-day, Mauricio invited a group of local and international Legends competitors to an introductory training drill. In a sort of beach boy/drill sergeant composite persona, Mauricio directed the swimmer-athletes and others (me) in how to primarily engage their core to effect tandem-kick propulsion. Anything that protrudes out – not just shoulders, for example, but even a kick with too large an amplitude – creates drag. Drag is the enemy.

We swam against the pool wall with one arm extended, trying to stay perpendicular while doing a tandem kick. We used kickboards as resistance, pushing them across the pool underwater with our arms stretched straight out, with elbows tucking in to our ears. It was all very challenging, but the possible benefits seemed patently obvious. For this round of training, Mauricio stressed that we were merely being introduced to the techniques. For us to really see the benefits – which would be magnified out in the ocean – we would need to put some real time into the training process.

Mark Drewelow has been working on these training drills for months and is very excited about the results. Mark seems to believe he is just scratching the surface of a whole new level of performance. Time will tell what the payoff is: next year at Legends, there should be several competitors who have followed Mauricio’s instruction.

This international group of bodysurfers broke bread and talked about the competition and places we had surfed. Anthony Posemann of Capetown, South Africa told us about competing at Pipe. Fernando Vasquez of Peru talked about the contest circuit he has organizing around Lima. and Mark Drewelow and Jacuzzisurfer talked about their recent trip to Nazare, Portugal. All of these incredible people had simply been brought together by the sport of bodysurfing. My theory is that the purity of the sport attracts a certain caliber of person, something I heard called “bodysurfing soul” in Rio. At the end of the day, it was the people that really made Legends so epic. And now that this big family is all connected, there are many new surf trips, contests, and projects in the works.