The Birth of the Modern Longboard 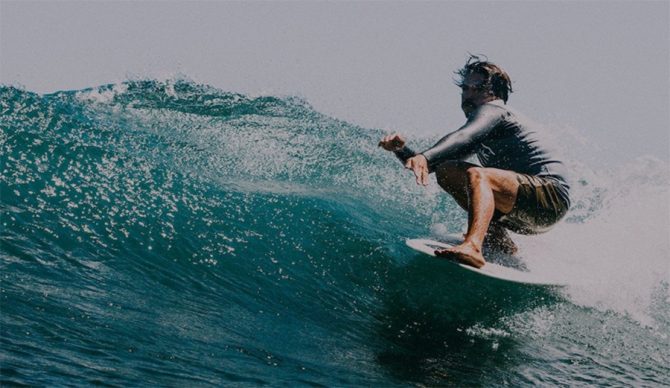 The return of the longboard signaled the return of fun. Photo: Relik Longboard World Tour

Editor’s Note: Welcome to our new series, Surf History 101, where we look at innovations in the world of surfing and beyond that changed the pursuit forever. In this edition, Sam George looks at the modern longboard and how it inspired the “fun revolution.”

The “modern longboard” is a popular design that approximates the length and templates of surfboards ridden in the early-to-late-1960s, yet has been modified for increased maneuverability through the incorporation of lightweight construction techniques, contemporary rocker and rail profiles and multiple fins.

Within months after the first shots of 1967’s “Shortboard Revolution” were fired there was nothing more worthless than a nine-foot-plus “log”. Yet while the new mini-guns and tiny mind machines being ridden by 1970 were great for exploring crystal cathedrals at rarified test tracks like Pipeline, Lennox Heads, and Honolua Bay, experimentation with the same reduced mediums proved to be much less enlightening at spots like the Hermosa Pier and Myrtle Beach — let alone mid-winter Newquay or Narragansett. It turned out that mastering the shortboard was a lot of work, especially in surf conditions most devotees encounter on a daily basis, with the drive toward “total involvement” coming at the cost of what made most surfers fall in love with the sport in the first place: fun.

This trade-off would only last for a few years. In 1974 an interview with sixties legend Phil Edwards found him opining that while little boards were more maneuverable, a heavy longboard got you further down the beach, faster. Only months later, La Jolla’s iconoclastic surf scribe Kurt Ledterman penned an editorial suggesting a renewed interest in all those 9’6”s languishing in garage rafters, asserting that there was absolutely nothing wrong with making surfing in average conditions easier and more fun. Still, both these early salvos in what would become, design-wise, a reverse revolution, advocated dragging out and dusting off those sixties models, pumping a dime in that old jukebox, so to speak. Ironically enough, it would take one of the architects of the previous revolution to again change the entire direction of the sport by changing the length of our surfboards.

Enter Herbie Fletcher. Fletcher, an HB Pier hot rat-turned-Hawaiian transplant in the late sixties, was on the front line of the shortboard revolution, credited as one of innovators of the “down rail” design breakthrough that eventually became the standard of contemporary surfboard rail configuration. Moving back to the Mainland in the early seventies, however, Fletcher found that the same boards that expanded his mind at Backdoor Pipe and Acid Drop, hardly provided the same high in three-foot Trestles.

With characteristic audacity he took a step in the exact opposite direction of what was happening in surfing at the time. While Island-style winger-pins ridden with serious intent were the vogue in 1975, Herbie, ever the outlier, had already begun developing an entirely new type of surfboard, designed not for the fantasy waves featured in period surf magazines and movies, but for everyday surfing in everyday waves. The idea was startling in its simplicity: why not build a 9-foot longboard, with its accommodating length and plane shape, but add a modern down rail with a tucked under edge and refined nose and tail rocker, combining the maneuverability of a shortboard with the planing area, trim speed and paddling advantage of a longboard?

Fletcher answered these questions when, without any prelude, the January 1975 issue of SURFER magazine featured a “Tips” section titled, Put A Little Lift in Your Drift…From The Nose. There was Fletcher, unrepentantly perched on the nose of a board that hardly resembled the “Trestles Special” model he favored as a teenager, but was obviously something new. Something that made what Herbie was doing look like, well, fun. If the photos weren’t enough to let the broader surfing world in on Fletcher’s secret, his written intro took on the tone of a manifesto. “For the last five or six years,” he wrote. “We’ve been concentrating almost exclusively on working the hook, inside, outside, around and through, very busily discovering all the new places and situations a shorter, lighter board would fit into and make it out of…but in reality, what we’ve been doing is unnecessarily giving up a whole range of really fun and stylish things that can be done in waves up to eight feet.”

There, he said it. And if it were anyone lesser known, less respected, less established as a style and performance leader, the surf world might not have listened. Other designers at the time were flirting with the idea of going back up in length, but none were as forceful, cocky, and confident as Herbie Fletcher, who, when marketing his “modern longboard” stated declaratively, “The Thrill Is Back!” The very next year a shot of Fletcher riding a longboard ran on the cover of SURFER — at the time the ultimate arbiter of relevance. This endorsement meant that while the classic sixties “longboard era” lasted but a short seven years, what could be called the “shortboard era” lasted only eight. In its place the “Fun Revolution” had begun.

Almost immediately after Fletcher’s cover shot appeared, the modern, lightweight, easy-to-ride longboard began to gain widespread popularity throughout the surfing world, until by the early 1990s one of the best-kept secrets in surfing was the number of new longboard blanks Clark Foam, who dominated the surfboard manufacturing industry, was actually producing.

The primary reason for this inexplicable subterfuge hinged around the burgeoning surfwear industry, whose biggest, most lucrative labels leaned exclusively into an endorsement-based marketing approach, dependent entirely on promoting the shortboard-riding stars of whatever professional world tour happened to be operating at the time. But a funny thing happened while the Velcro Valley moguls weren’t looking: the sport’s fastest and most enduring trend turned out not to be pro surfing (with surf competitions actually decreasing in number as the decades passed) but the exponential growth of what could be called “recreational surfing.” Meaning those surfers, as passionate about what they were doing as any pro, who paddled out into the waves purely for fun.

Current surf industry market analysis shows us that today, 45 years after Herbie Fletcher first declared that “The Thrill is Back,” a significant percentage of those fun-loving surfers pursue their thrills, and find their fun, on a “modern longboard.”

Please refer to the last sentence of the previous paragraph. Discussion on the global impact and growing market share of Wavestorms, Odysseys, Catch Surfs and various other soft-construction versions of the modern longboard can wait until another time.