The Case For Communist Surfing 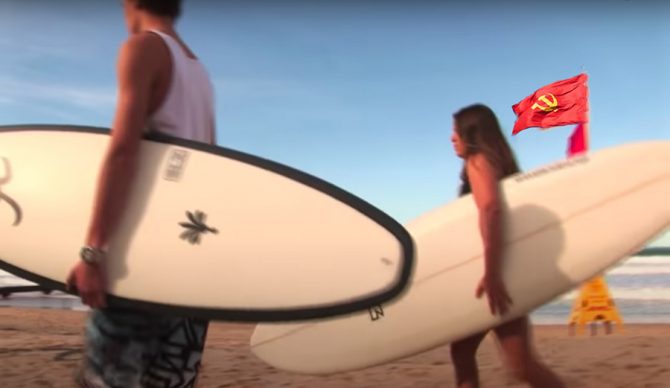 Communist surfing? Is it a thing? Not likely. Photo: Screenshot/altered

Ah, so good to see you! Please come in, Comrade Broski! Have a seat. Were you followed? No? Perfect. I knew no one would find us at this secret rendezvous point – in between the expansive t-shirt racks at the Pacific Sunwear in Irvine.

Now, the reason I have called this meeting today, is to tell you about an opportunity. You see, the surfers, they are upset. They have found themselves under siege by enemies like the SUP, the foam board, and this very PacSun. Everyone surfs now – and all the boards they surf on are made out of Styrofoam cups and Teflon or churned out by a cold, heartless machine. The capitalist monster has been slowly gnawing away at surfing’s soul for decades, leading surfers to watch in horror as the identity they care so deeply for has been reduced to nothing more than logoed t-shirts and the “Get Pitted” Guy.

That is where we come in, Comrade. The time has come for us to enlist surfers in the fight against capitalism. We must give them something new to believe in: Communism!

You think I am crazy to try to push a political ideology on the surfers, Comrade? Do you think this is a worse idea than my attempts to foil the plans of Moose and Squirrel? That may be so, but you are a fool if you fail to grasp the delicious opportunity laid out in front of you. At the very least, you should be able to enjoy the exquisite irony of launching surfing’s communist revolution from inside one of Orange County’s capitalist shopping mall strongholds.

You see, the surfers are already brainwashed – ahem – I mean well prepared for the communist life. Surfing’s framework is a miniature communist manifesto. Anyone can wander down to the beach, find a wave that meets their ability and needs, and have a surf. There are rules in place where turns are taken, positions are not compromised, and waves are not stolen to ensure the common ocean resource is divvied up equally. “From each according to his ability, to each according to his needs,” the famous Marxist statement goes.

In the ocean, the proletariat has all of the power. The working class establish social ownership over a commodity (read: waves) is communism realized in its most perfect form. They don’t quite know it yet, but the surfers have formed their very own USSR (United Shredding Surfing Republic). If we swapped out vodka for Mexican lager, the hammer and sickle for a shaper’s sander and handsaw, and Russia’s most well-known bald guy (Vladdy Putes) with surfing’s hairless hero (Kelly Slates) then already it’s practically the same thing!

And we don’t even need to teach them to be endlessly corrupt! Surfers already habitually break their own rules to hoard more waves, tangling and misconstruing their precious etiquette in order to serve their own benefits. It’s the only way to get ahead in their wave-starved society. They have already created an entire ethos centered around sharing the ocean, but ignored it out of greed. That’s the exact kind of thinking we need!

Surfing is prime for a communist revolution. And I will be their Broseph Stalin, leading them to new utopian heights they could not otherwise have achieved. And you, Comrade Broski, will be the first of my many yes-men that won’t stand in the way as I make shady, underhanded deals with all of the surf brands to keep them in business. I’ll turn Southern California into the new Iron Curtain, Pipeline into a Big Red Machine, and Kim Jong-Un’s shoreline into a viable surf destination!

Wait, where are you going, Comrade? Don’t leave! You haven’t even had the chance to see my PowerPoint Presentation titled “Ride the Communist Party Wave.” Please stay. I’ll even buy you a pretzel from Auntie Anne’s. Together, we can usher in a new era of surfing!

Editor’s Note: Jason Nauman writes about the lighter side of the surf lifestyle.